The most frequent greeting of a pilgrim and one we give to one another is “Buen camino!”  What better thing to say than “have a good way! 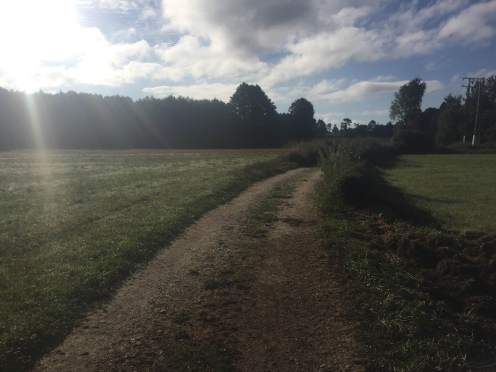 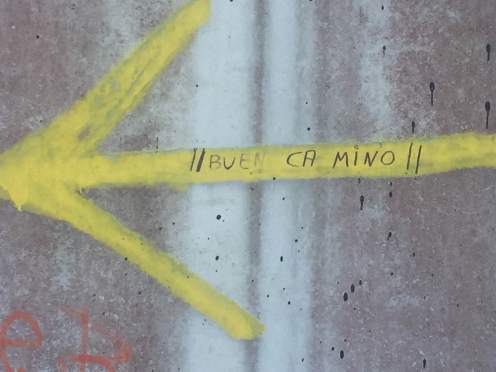 The 100 km to go to Santiago marker, which I had been looking forward to seeing, appeared outside of Baamonde.  In the state of Galicia, the part of Spain I’ll be in until reaching Santiago, every marker shows how far yet to go. This can be especially discouraging when you’ve hiked an hour but the next marker only shows one kilometer has passed! But this marker was different.

When I saw it, on September 18th joy flooded my soul. I laughed and cried simultaneously. I’ve never attempted nor achieved such a goal as this before. Yet it is more than a goal, it is more than a finish line, it is a chance to see all of life through a new lens. And that little blessing “Buen Camino!” Captures this.

It is all-encompassing.  In a way this is remarkable for not every moment feels that “Bueno” yet in the dynamic of the Way, it all becomes so.

September 16th, I had treated myself to a private room at a Pension.  But I awakened at 3 am to a loud conversation happening in the room next to mine, through the paper-thin walls. (It wasn’t exactly an upper-crust class establishment 😬).

Also, since I was sweating, I took off my long sleeve shirt and crawled back into bed. But I couldn’t sleep, due to the conversation, then I noticed.  An itchy place on my arm.  And, in that moment, I felt something as it crawled across my skin. It met its demise!

I was out of that bed like greased lightning. Turned on the lights and whipped back the covers to reveal, yep, bed bugs.  And not just a few.

I smashed several and they’d clearly been eating!!! (Did you know bedbugs can live up to 300 days without eating? Sounds like a horror movie creature!)

Needless to say I spent the remainder of that night in a chair, not the bed, caring for my things, packing up and leaving that room:  “Buen Camino!”

I started hiking at 6 by the light of a full moon and my trusty flashlight. That day, after the day had dawned, I passed a woman in her yard and she greeted me with “Via con Dios!” —  “Go with God!”

It was one of those moments that the words seemed to settle into me.

That morning while sitting in that hard, brown, wooden, chair in my room, Jesus told me that I hadn’t stayed in that bed with those bugs crawling on me, eating me, but had gotten up, covered them back up with sheets and blankets, and then packed up and left.  He said that frequently I am not as clear with my own negative thoughts or attitudes. Indeed, thoughts that eat away at me often get coddled, not rejected. In essence I stay in bed with them. I let them have their way.  That woman’s greeting reminded me of that observation. Indeed, Brian, go with God.

The 700 kilometers behind me have been filled with the presence of the One who had made this Camino Bueno.  He has brought life to those less than great moments, especially in the retelling.

I don’t imagine I will ever be able to find words for it all– ah, but how it all has blessed my soul!

Grace and I were at the ends of our ropes one day, after several hours of hiking in the wind and rain, we were soaked and tired.  And now we were walking hour after hour seeking to arrive in the town of Luarca. But the entry was seemingly unending.  Were we walking in circles?  Has we seen that building before?

That’s when Grace said: “If anyone wishes me a ‘Buen Camino!’ they’ll be taking their lives in their hands.”

It was the moment, the way she growled it out, the intensity we felt, and the scenarios that we imagined that caught us. We laughed so hard and that laughter lightened our hearts as we made the final glorious turn into the quaintest village and the stress melted.

Another night we were eating dinner with our friends from Lativa, and Inese shared how she and Anna and Elizabeth had begun walking in a cornfield as a shield from the fierce wind and rain. The Camino had placed us next to that field for what felt like several kilometers.

Inese told how, Anna, who is this sweet, lovely woman, a midwife by profession, in her early 40s, had had enough.  Hearing a car coming down the road, she had said: “I will stop the car and they can give us a ride.”

So, without thinking about how it might look to the driver to have this green, shapeless, poncho-ed blob leap from the corn unannounced, Anna leapt out of the patch, onto the dirt road, wildly waving her green arms.

The car didn’t stop, more than likely the driver is still trying to explain to his family what he had seen, and our laughter, around that table in that fine restaurant couldn’t stop either.  Tears rolled down our cheeks as we shook with delight at the scene we imagined. In the moment, it had been so hard, but now in the retelling, there was immense joy. Indeed, “Buen Camino!”

I had spent 8 hours in the town of Unquera awaiting Grace’s arrival on September 7th. I had been standing out on the sidewalk for an hour, greeting the hiking pilgrims while waiting. At about 4 in the afternoon a man whom I later got to meet, named Holgar stopped when I wished him a “Buen Camino!”  “Buen!”  He said!  “I was first here at 9 this morning, and I’ve been hiking all day, following yellow arrows and here I am back here again!!”  He added some colorful cuss words.

But I wondered what work the Camino was working in him that would become Bueno.

A week later we bumped into one another again, this time in this bar, drinking tea and coffee, on this terrace overlooking this incredible stone plaza and church in the medieval village of Mondoñedo.  He asked me “Have you cried on the Camino?”

“Have I?  Like this morning on the bus after Grace left? (I skipped one stage for a rain break). Or yesterday afternoon in the shower?”

He had hit tears many times as well although did not feel they were connected to the Camino, like that day when we had first met, or the time the funds transferred took five days to access so he was stuck in a town waiting, or this other situation.  Every story was a part of his Camino.

Once he had hiked all day, and found no bar or grocery open for food or drink. It was 6 pm at night and he was walking through this quiet town. He made a few circuits through it looking for any place for food. As he came down one of the streets there on a balcony stood an older woman and younger one in lively conversation. Seeing a pilgrim, they had said, “Buen Camino!”

Right then it didn’t feel so Bueno!!

The women erupted into conversation. Then one of them said, in English, “Wait!”  So there he stood, in the street of this Spanish village, waiting. About 10 minutes later the older woman came out of the door, carrying a bag and speaking no English, offered it to him, saying again, “Buen Camino!”

He looked inside, tears brimmed his eyes in the retelling, “What was this?”  There was a sandwich, fruit, dessert and a drink for him. He wanted to kiss her. He said, “Muchas Gracias!”

I said, “Then you cried?” “Yes,” he said. And then in story after story of his adventures finding camping sites, and experiencing many blessings, he illustrated how indeed “Bueno” his Camino had been.

We laughed about that first meeting and how angry he had been. “What are you learning about yourself as you walk this Camino,” I asked.

His answer took the next hour, including all his pictures. What had seemed totally not “Bueno” had been a “Buen Camino” indeed.

Are we too quick to write something as good or bad by the initial experience of it? Is it possible that all of life–  the bugs, the times in the dark, the times in glorious light, that it all becomes packaging of a truly blessed way?

Today, this has held my thoughts.  My Way included five hours alone, hiking in the dark and then cold morning fog, then a three hour conversation with 69 year old Tony (“my mother hated long names,” he’d explained).

He enriched my walk, distracted me from the pain in my feet, and brought me joy. We tackled theology, faith, philosophy, hope, family issues, and more in that time. We stopped for an incredible “Menu Del Dia” that included soup, bread, fish, fries, pork chops and dessert and drinks all for $12 per person. After that we arrived at the monastery in sobrayo so refreshed, in the brilliant sunshine, and someone on the way into town greeted us with “Buen Camino!”  May your way be Bueno as well. 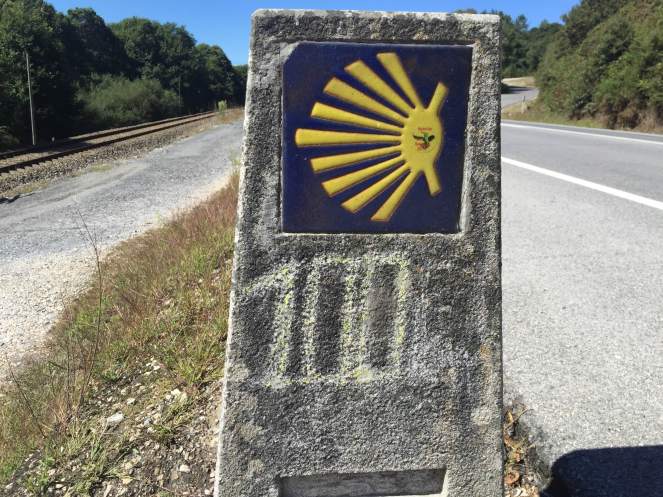 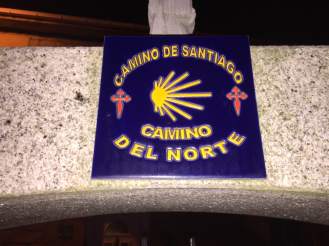 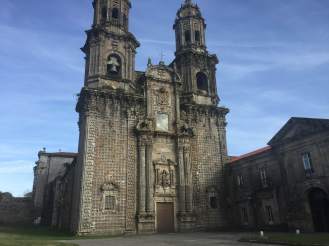 —
“Christian pilgrimage always calls us to further growth.  As Origen wrote:  ‘Travelers on the road to God’s wisdom find that the further they go, the more the road opens out, until it stretches to infinity.'”