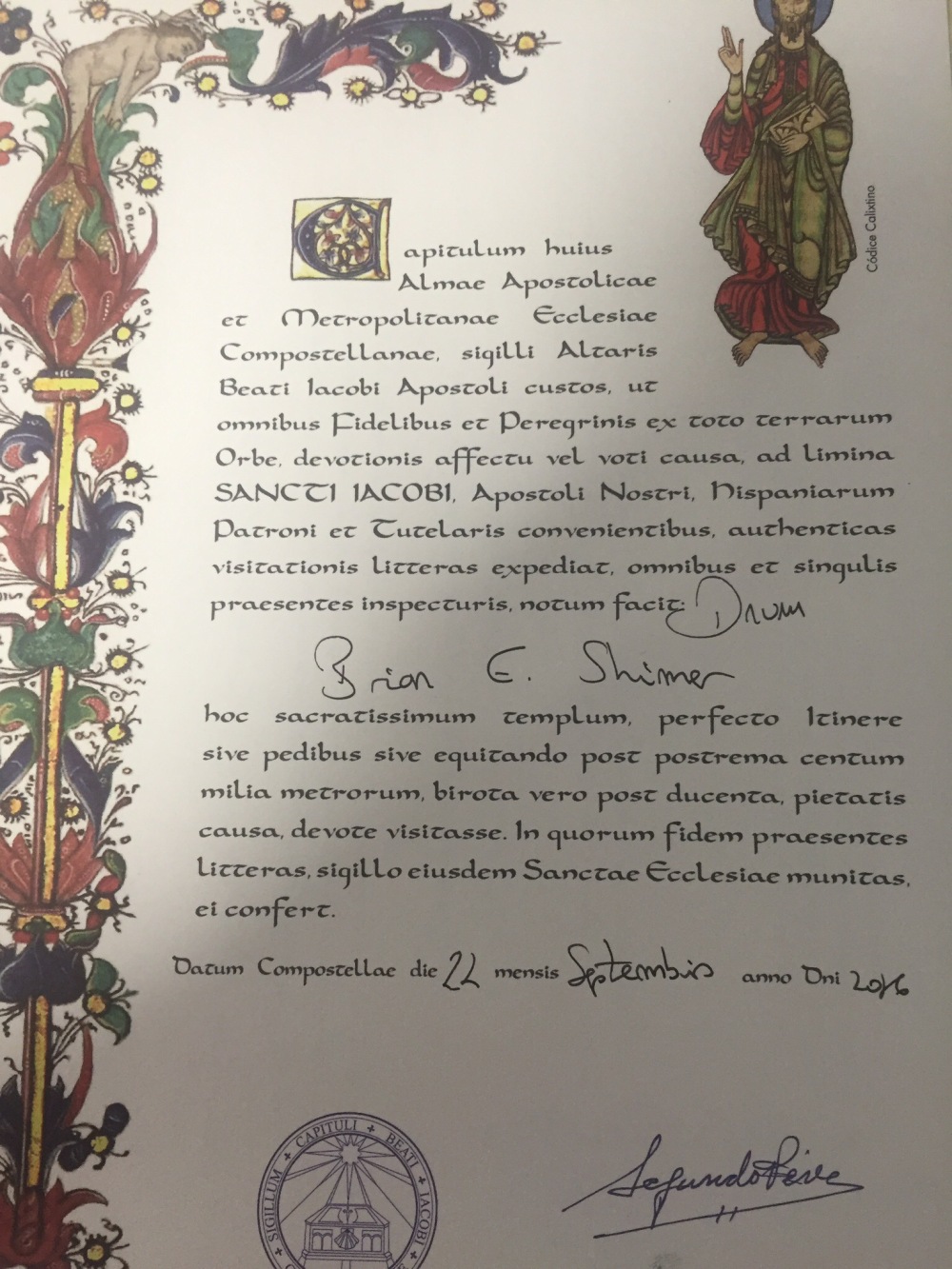 This was the first day I had not planned to travel anyplace in so long, it just felt weird.  Just to have arrived in Santiago felt weird.

Nannette and I went to the official Compostela office and got certificates. Tears came holding that document.  I’d dreamed of this and now I had achieved it.

Nannette went back to our place, while I went to meet Inese, Elizabeth, and Anna for breakfast at their place. 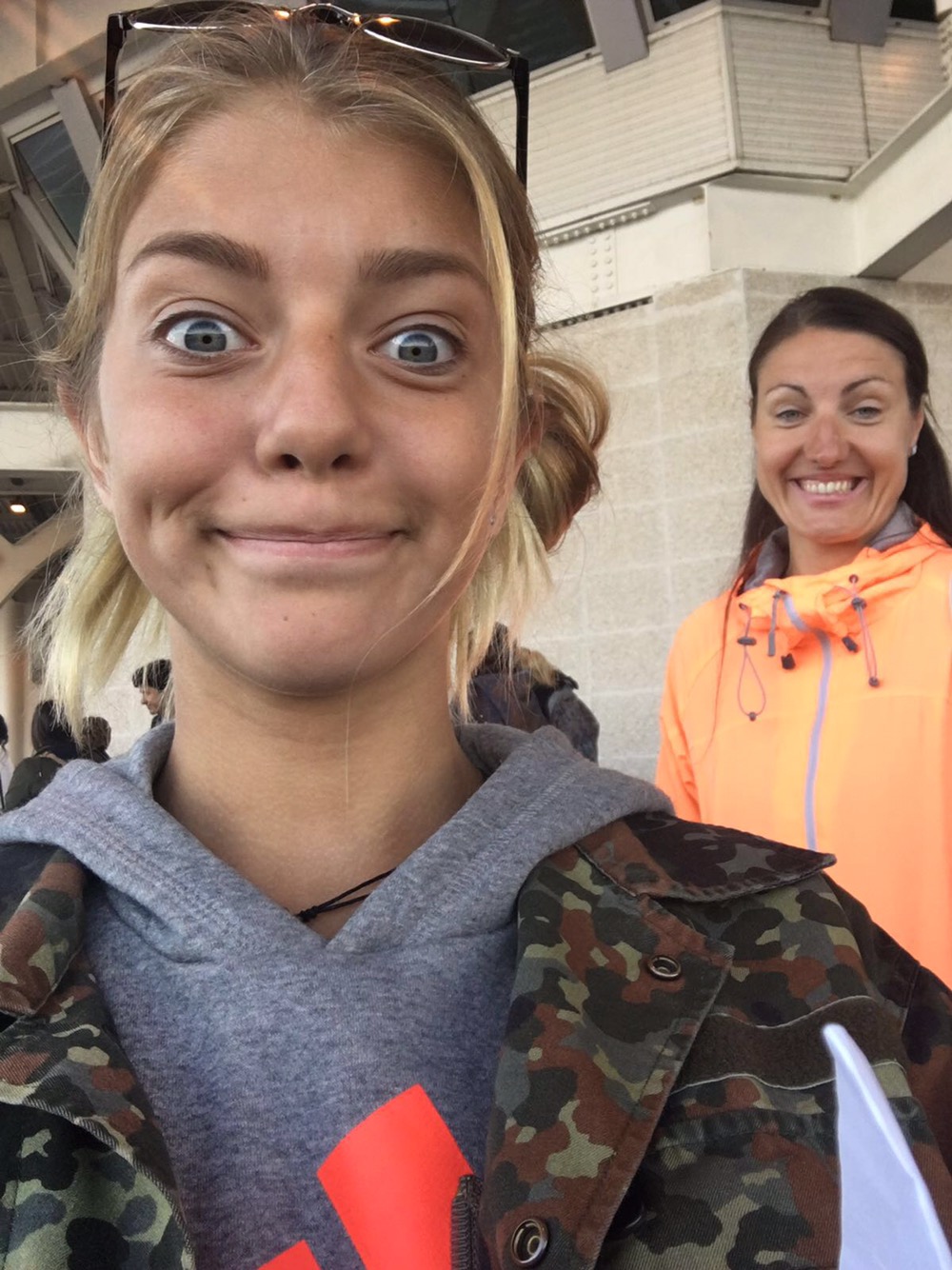 We had the best time together, eating a simple meal in their room overlooking one of the small plazas in Santiago.  We had a joyful conversation sharing so much love.

Inese told how this one Spanish guy took a shine to her. She didn’t see it coming, at all. They had shared What’sUp contacts and when he realized they’d taken a bus and he’d not see her again, he took a taxi for 90€ to Arzúa in order to have dinner with them. He overnighted and then next morning got a taxi back.  All this to see them, well, her!!!

Then his What’sUp texts had been filled with language that revealed the way he felt for her. His desire for more of a relationship but she shared, “I don’t share the feeling.  What do I do?”

I said, “Well you can see by his actions the kind of value you have for him. Who heard of such a suitor? Who spends that much for one night without high hopes?  You’ll have to just tell him, I guess.”

When I said what value she had, she got tears in her eyes.  That spoke to her heart.

She then shared a text she had received at the mass. I don’t recall who sent it, but it stated: “Since God is the I AM, we mustn’t dwell in the past or the future but in the present, where God IS.” We shared this precious moment. Hugs all around I helped them down out of their room and they headed off for the bus to head home.  They sent pictures from the plane. 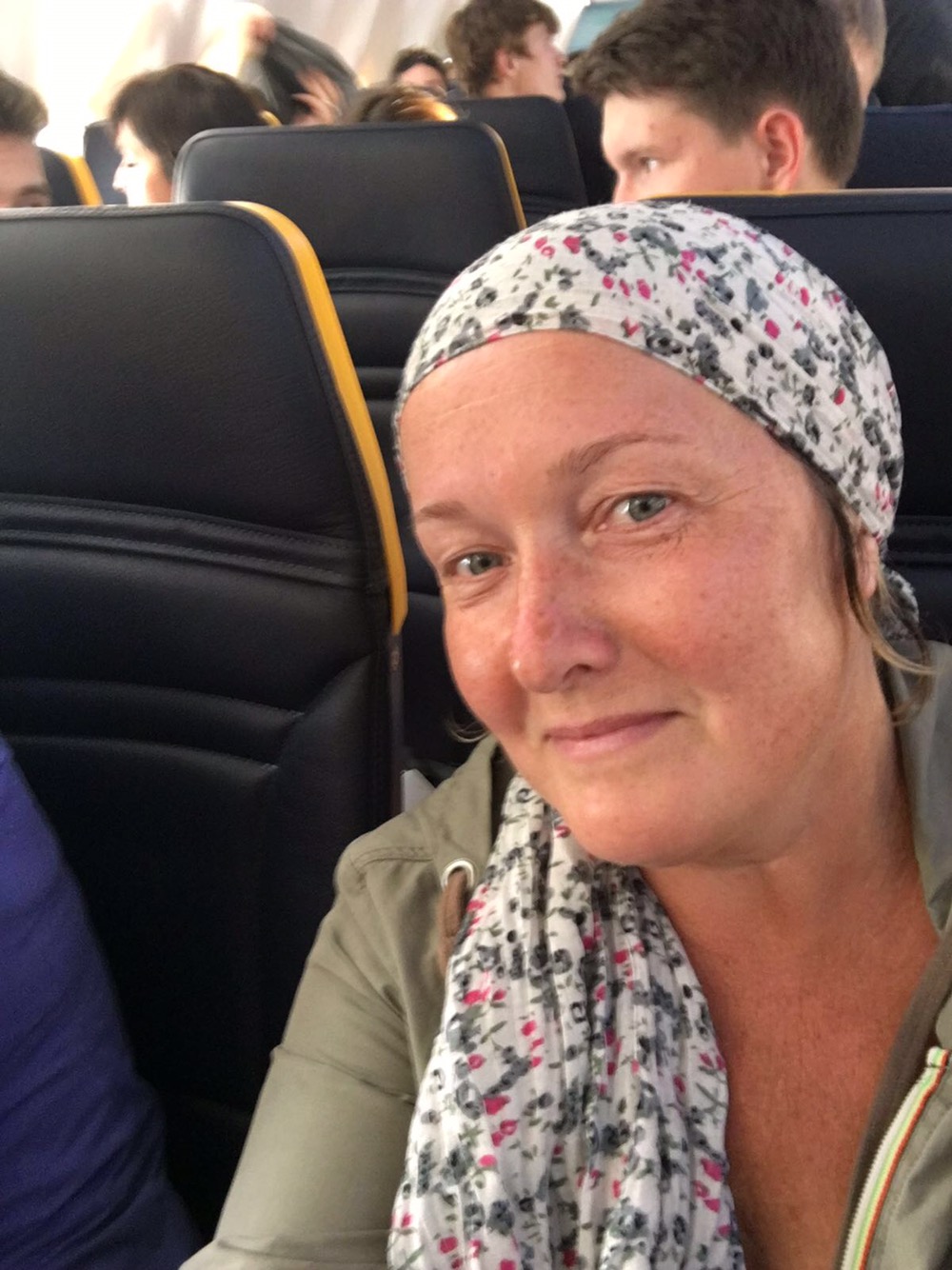 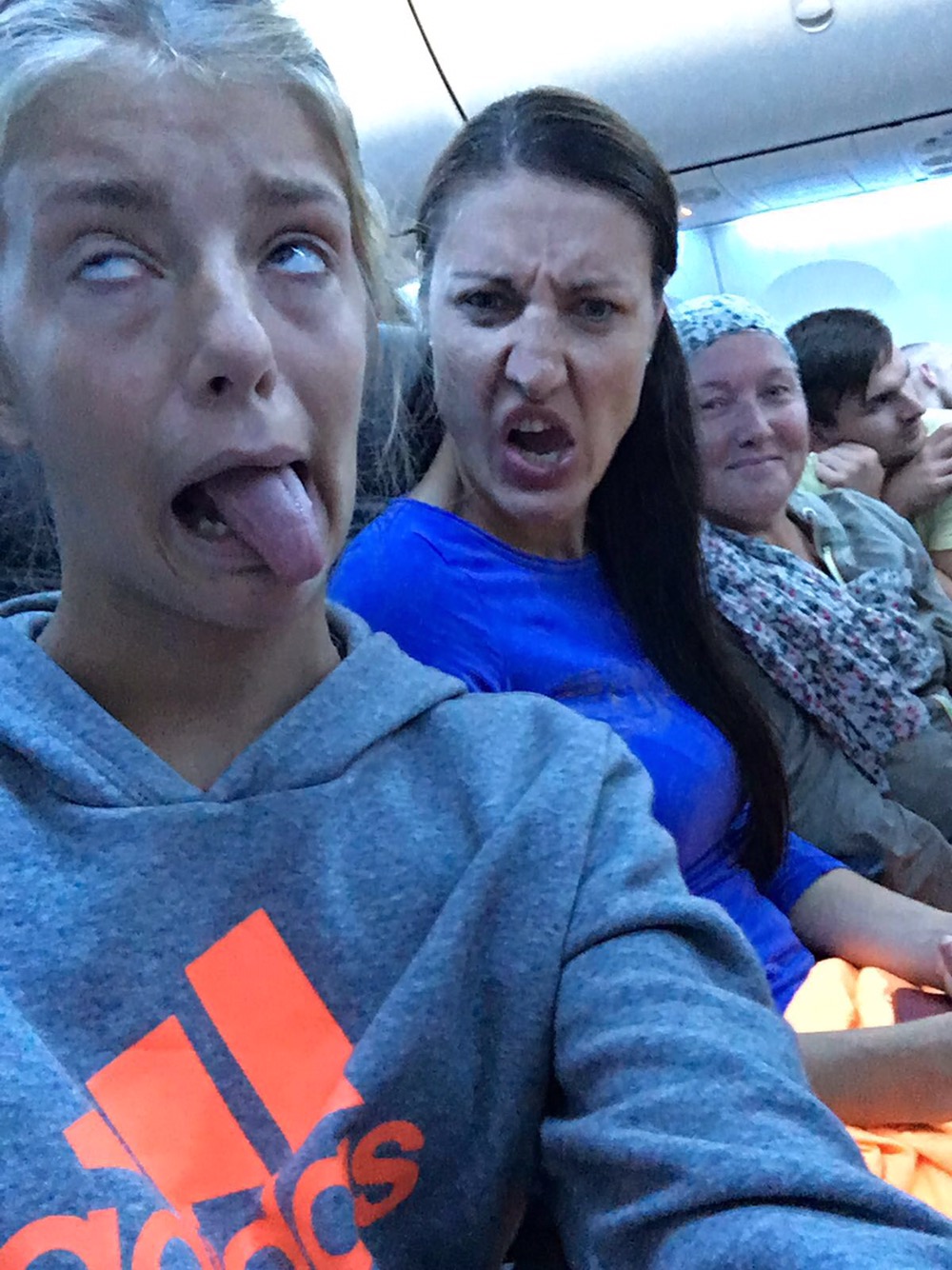 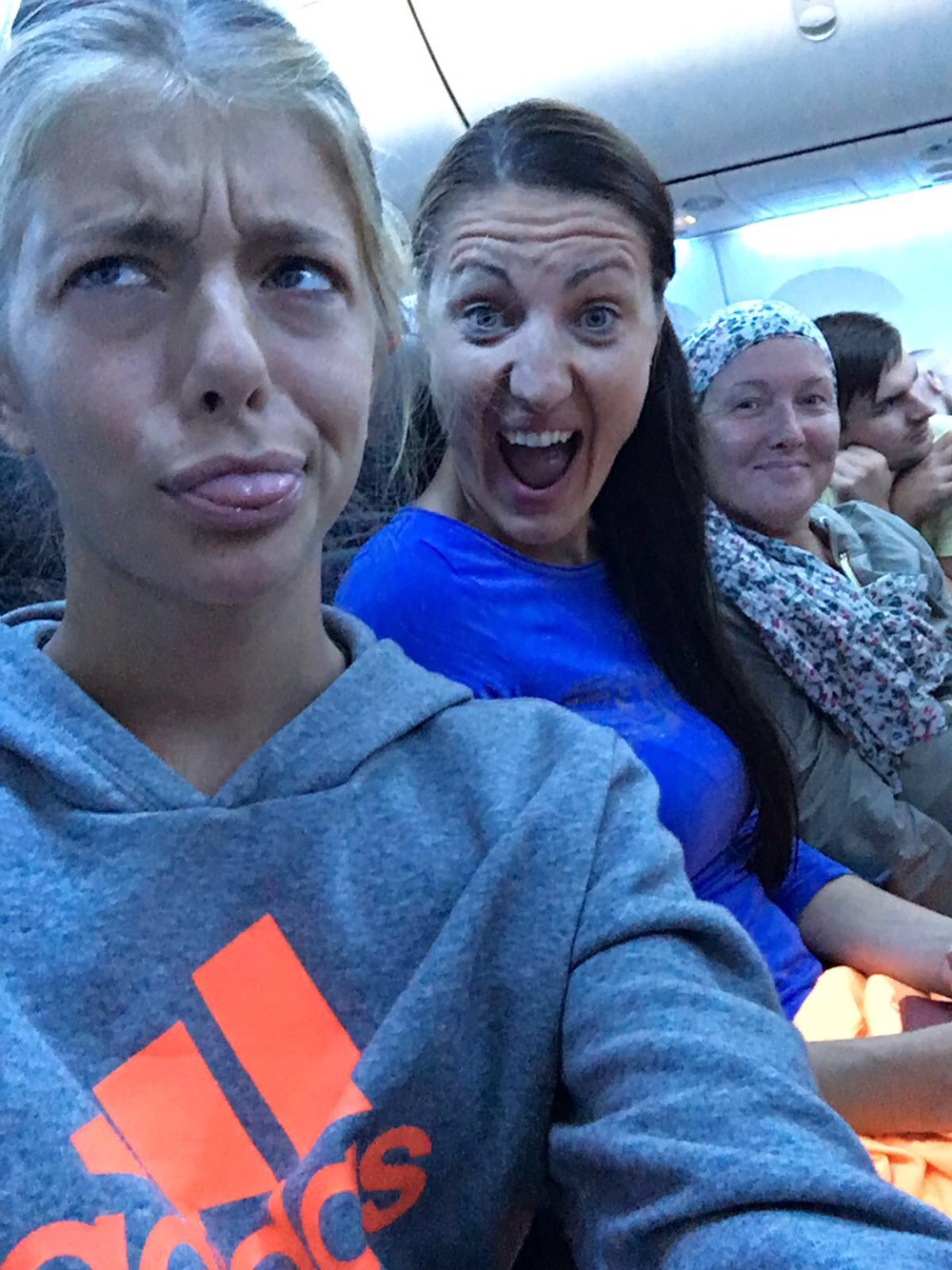 I returned to the room. Nannette had napped and we then went to the big mass. I found it hard to follow, boring even.  I was so low on food and water, which also lowered my energy and my focus. It was a difficult environment, as well, for during the mass there were tour groups constantly milling about. Met up there with Michaela from Germany and her friend from Spain.  He led us to the best place to watch the swinging of the huge censer. That was beautiful and worth the whole mass to experience. 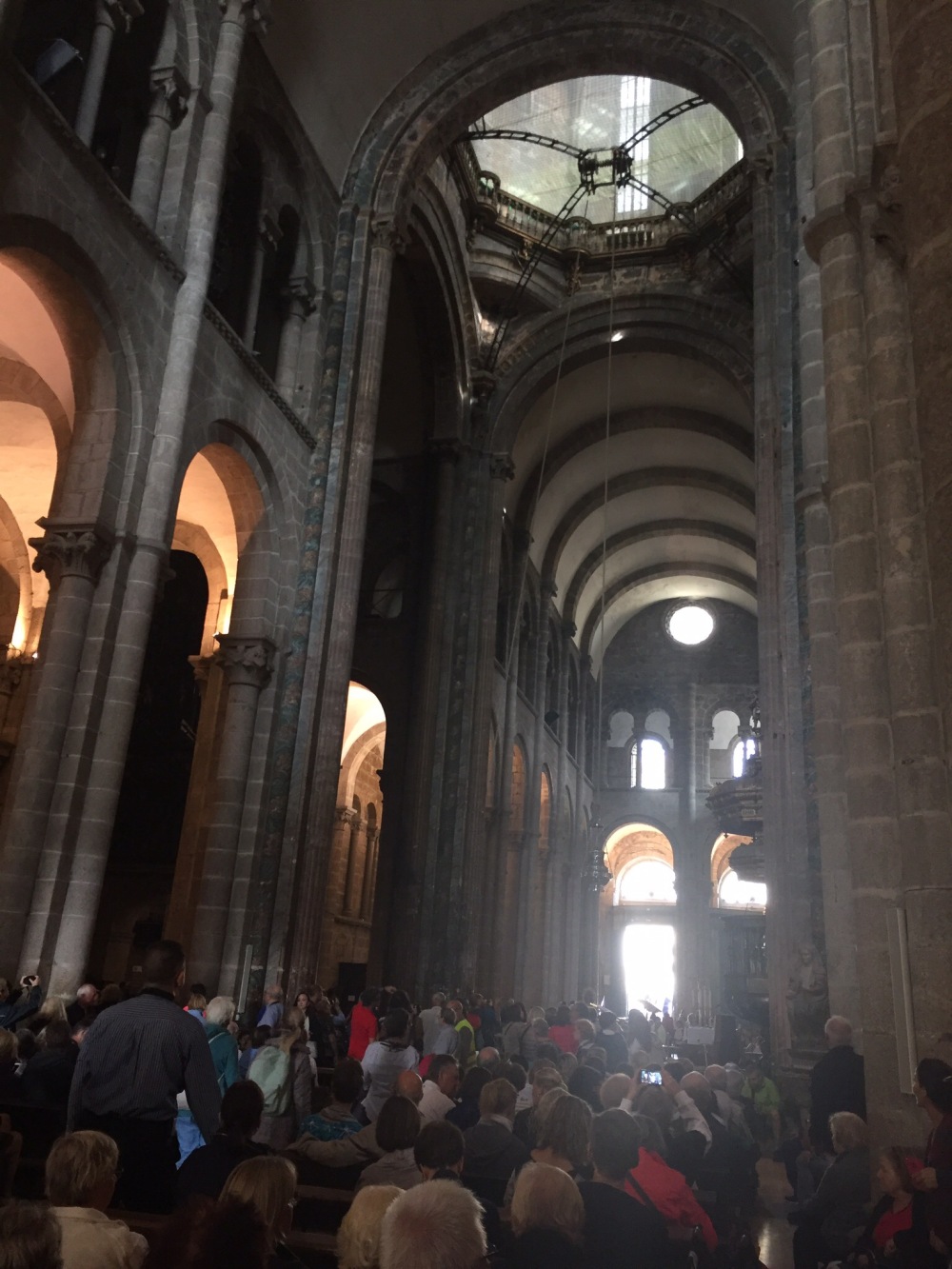 We went into a side door and up the stairs to the statue of St James.  Pilgrims often come and hug him.  The man ahead of me, overcome with weeping did so.  It was touching to watch him.  I didn’t know what to do with the statue, but knew I certainly didn’t’ need to hug him!

I received a What’sUp from Nicole so went later to meet her and John for dinner.  En route to the place, we came across this orchestra warming up and got in on this symphony that was wonderful and soul refreshing. Then dinner a local, cheap and delicious place, which Nicole said was the best food of the Camino.  Claudio and Lorenzo joined us.  Afterwards, Claudio Lorenzo and Nannette and I went for drinks. We heard of their adventures and their walk to Finisterre. We made it home to our place at midnight and I slept late.  Nannette departed for home the next morning. Claudio and Lorenzo and I went to breakfast before they left, and I went to the English mass. 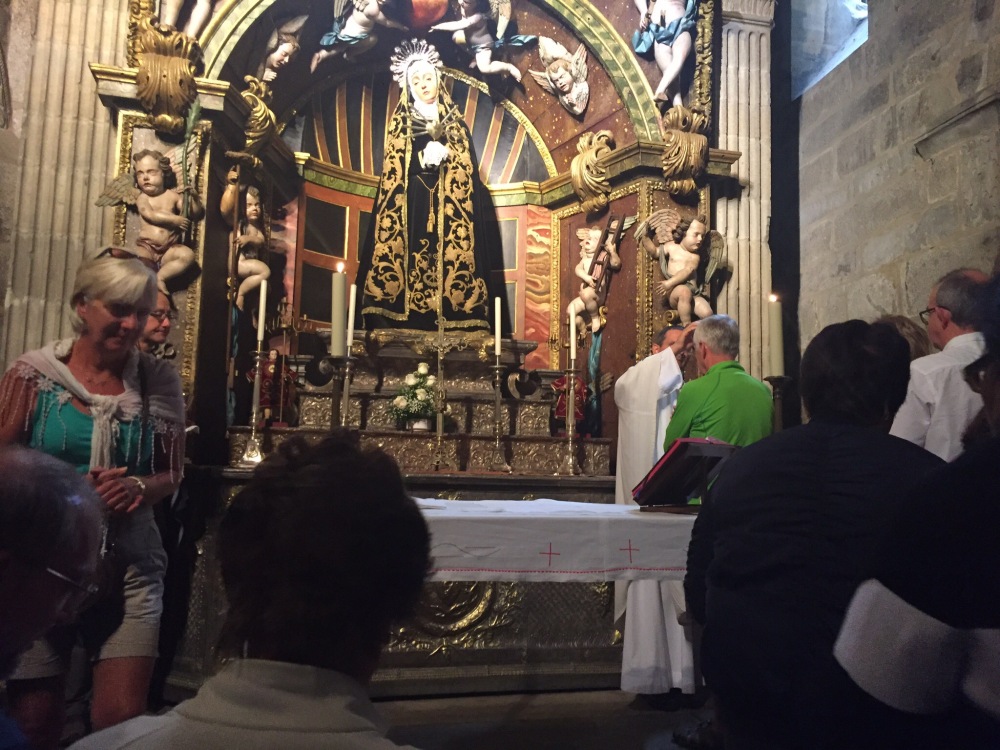 I had been asked by the local Camino chapter to pick up shells from an American who worked with the English mass at the cathedral to bring back to the states. We’d been in touch, but in trying to find the chapel for the English mass, I stumbled upon the Polish chapel.  I thought perhaps the English mass would follow so I waited, experienced this soul-filling music, a cappella by these four Polish youth.  It was a heavenly moment.
Then I walked out around the corner and found the English chapel and sat down for the mass.
The guest priest in leading this mass, a beautiful guy from Venezuela.  He had worked at the Cathedral for years, and his job is to hear confessions from morning to night daily.  And here he was filled with vitality.  He led with a sincerity and such joy. His eyes just shone with the light of Jesus.
He had us first introduce ourselves and where we were from.  There was a woman there who lived not 1/2 a mile from my house. We connected to chat afterward.  And I was sitting behind the Irish couple with whom I had walked a few days back.
We began with a couple really old hymns, Here I Am Lord and Lord, I have come to the Lakeshore from my days when I pastored years back in a small community church in Banks. The word, prayer, liturgy combined then to work on my soul in this place.  As the priest presented the host, blessed it and offered it to all, Catholics and non-Catholics, a dam broke within me.  I sobbed and sobbed. It had been so long since I had received communion. It had been so long since I had been in worship.  I wrote in my journal as tears ran down my cheeks and my nose ran, “It was rich, powerful, heartfelt.  I just want to say, you’ve touched me, blessed me, enriched me, Lord.  I love you.”
The man who worked there with helping to set up and run the mass, who was to meet up with me, found me after the mass and gave me my bag of shells.  That felt a bit James Bond style to me!  The handoff!
I had made an appointment for a haircut that afternoon.  So, after the mass I walked to my new digs.  I had booked an Airbnb outside of the old city of Santiago proper.  It turned out it was only 2 miles away.  There was a bus that stopped near the front door.  I walked there this first trip, however, which took about a half hour.
It felt a bit silly to be leaving the Old Town, but as I walked into the residential area where my digs were, I began to breathe easier.  It was so peaceful. Once inside the apartment, meeting my hostess, I celebrated my decision. I had a private room with a family. They had three cats, and I love cats.  There was a little girl whose careful Spanish I could easily understand.
It was beautiful when I got there, I sat in the sun for a while on their terrace 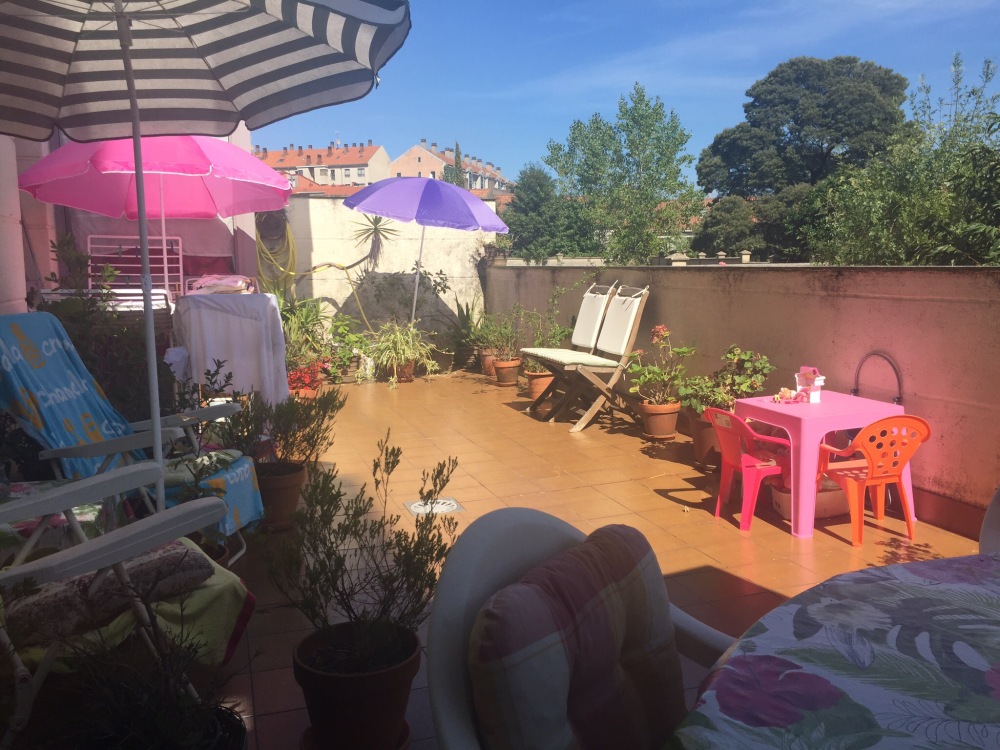 to eat my lunch I had purchased at a local grocery.  I washed my clothes and rested.  Then I left to return back to the Old City for my haircut taking the bus as my hostess Susannah instructed.

The short walk back into the Old City was easy, I didn’t even get lost, which was a first for me.  The young barber was a delightful guy who had ridden four Caminos on his bike and ridden to Finisterre multiple times.  He stopped the haircut to show me his pictures and told me his favorite restaurant in Finisterre that I had to try.  This conversation was all in Spanish and a few English words thrown in, with gestures when nothing else worked.  We spent a lot of time laughing.

That night Nicole and I met for dinner at a quaint Italian place and had the best night sharing a bottle of wine, eating the most excellent foods and Chocolate Mousse for dessert.  We had a great conversation about life. She is a rich person of depth and authenticity. She was leaving soon for her 18-month journey around the southern hemisphere. I read her blog that evening, and found that she was tackling valuable stuff on worth and value.  If you want to check out her journey, click here.

After dinner, I walked back to the place to catch my bus.  I wasn’t certain on the place to stand, but waited. Then, when my numbered bus came, as I got on, the driver was the same one I had had that morning and as I tried to pronounce where I wanted to go, he remembered me and finished the sentence for me. Then he told me when to get off, and as I got off directed where to walk since the bus didn’t take the same route to get back to my place.  A woman witnessed his care for me, and I quipped back to her, “Mi Padre!”  This brought a gale of laughter from her, who knew he was not my dad, and to the bus driver, who was blessed.

After some fits and starts on the dark streets, I found my street and the apartment.  As I was about to enter, I glanced across the street and saw an ATM.  I had had trouble getting cash recently, so decided to try again here.  I went, and again the machine gave the message I had seen many times before:  “Unable to process your transaction.  Would you like a receipt?”  I said, “yes.”  And after receiving the receipt I walked across the street to the apartment door.  There was a man waiting to use the ATM behind me.
I was telling Susannah about my day when the doorbell rang.  She said, “Must be one of my girlfriends.”  But a male voice spoke through the intercom.  She opened the door and there stood the man who had been behind me at the ATM. They rattled off Spanish to one another.  He handed her a wad of bills, which she handed to me.  Apparently, the machine had decided to work, and this good samaritan had brought all my 300E across to me! He had seen which door I had entered and taken a chance on finding me.  “Someone else might have taken it,” he said. I was so grateful.  “God, you look out for me!” 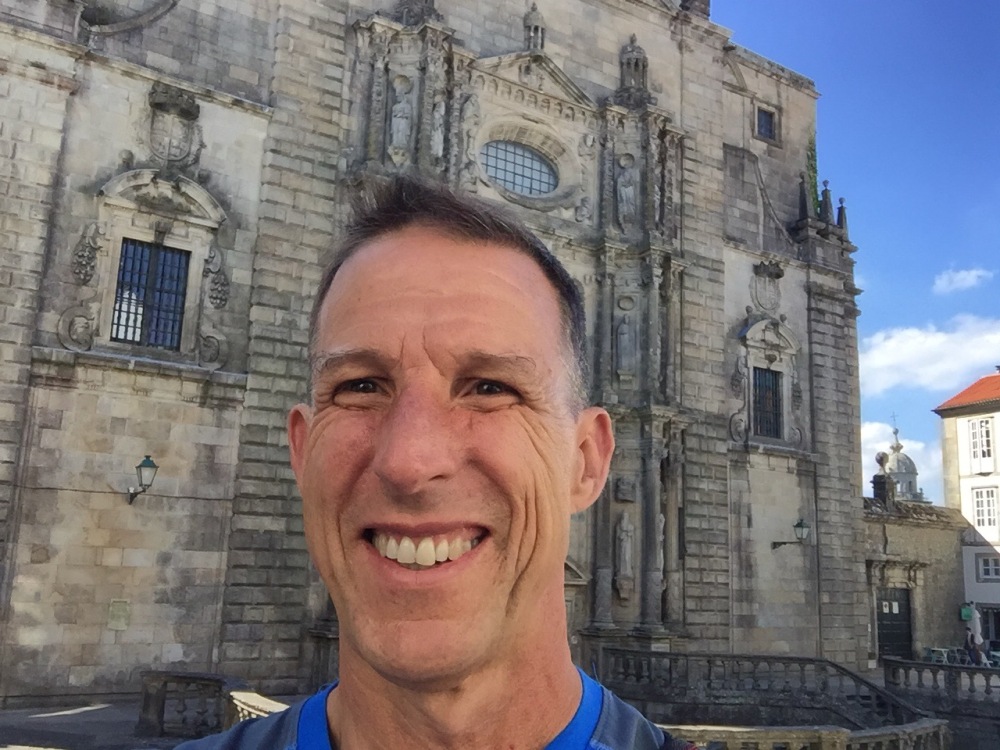