Today August 22nd was our 35th wedding anniversary and we were so many miles apart from one another while I walked and walked and walked this path.  I had planned to take this day easy.  It was 10+ km from Irun to San Sebastián.  The route began with the steep climb up the stairs and switchback path to the top of a bluff.  The view was incredible passing a centuries old Roman style bridge and vistas of the sea far below me.

The air moist, warm, pleasant for first thing in the morning.  My left calf muscle began to seize up on this day, my feet still hurt, as did my body.

The question on my heart today, as I walked alone, saw no one else between the Albergue and San Sebastián was simple:  “Who am I when I don’t speak?”  It was a serious question, for communicating so far seemed challenging, at best and futile at worst.  As I walked through the morning, voicing the question aloud, there came this resounding answer, as if through the entire cosmos, “MINE!”

This was not new news to me, I knew this: my belatedness resides in belonging to God.  It is not based in my efforts, my doings, my words, but based upon the gift of life found in Jesus.  That’s true for me.  But it is easier to “think” than to “believe.”  Easier to “believe it” than “live it.” Indeed, this lesson was the ongoing theme of the Camino.

Randy from church had written this in the journal the congregation gave me before departure:  “You think! You talk! You laugh! You cry! You feel life enclosed around yourself and hold you, and you learn to love yourself the way life loves you too… ‘You are with me, Jesus. Your rod, your staff, make me feel safe.'”

That line about learning to love myself the way life loved me, struck me as I read it. I realized as I walked along that God had lessons of the Camino for me.

After a few hours I rounded a bend and looked down upon the twin beaches of San Sebastián.

The one thing I wanted to do on this warm, beautiful day was swim.  I walked down to the beach and walked along the promenade drooling as I looked out at the beautiful water.

I searched and searched for the albergue, and apparently had missed it right on the entrance to the town.  “If I could just drop my things, then, I could swim,” was my logic.  Later I learned that in Spain, you can trust the people on the beach. Steve from San Sebastián said, “Ah man, no one would touch your pack.  Just leave it and go for the swim next time.”

But this day, I walked into the town, instead,

found a fruit stand and purchased a 6 raw eggs, meat and fruit, and then a tea from the shop next door.  While ordering an American couple came in for lattes, and were having a difficult time communicating about whether the server had soy milk.  That much Spanish I knew. I explained what they sought to her and she complimented me on my Spanish!  Will wonders never cease! 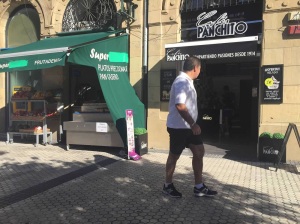 For the next couple hours I relaxed in town, with people around me, sitting on a bench in this park in the middle of town, eating fruit and meat and drinking my tea and breathing in this incredible break from the press of life at home.  I didn’t need to travel any long distance.  There’s no work. There’s no press to try to speak to anyone, since the language barrier was significant both to be understood and to understand responses.

I hiked further through town, then, looking for the albergue, seeking to follow the yellow arrows, but not finding it.  A man redirected me up a hill, but the pension I found was full.  That man at the desk directed me to another 2 km UP the road.  Already I could tell I was leaving San Sebastián, but still I hoped for a swim, somehow!  The next Pension was closed.  I stretched, took off my boots while sitting on their porch, and rubbed down my feet.  And decided to walk up the road, perhaps there was another place.

By this time the sun was blazing hot and I came to a sign further up the road noting the next town, Oreo, was 9 km.  “Not doing that!” I said to myself.  But there were no other options.  There was nothing available back down, down, down in San Sebastián.  So, I trudged on.

I came upon the 6 Americans on the Camino tour again and we chatted briefly.  “Hey Look,” Jenny in their company shouted to the others, “It’s Brian!”  We chatted as they let me pass and the road seemed to go endlessly ahead of me.  It was hot, sticky, the air close.

I was running low on food energy, and although I had planned to cook the eggs later, there was no fresher protein available.  So, I ate my nectarine and allowed some of the juice to fall into the cup left over from my tea, cracked the eggs into my cup and drank them raw. Never thought I would do that!  But I have never been so grateful for food! They tasted like scrambled eggs going down, and gave me this boost of needed energy.  It was so much protein all at once, I almost felt nauseated!  And I hiked on.

The 9 km took another three hours.  I drank all my 2.5 liters of water. I came to a sign that read “Santiago 787 km,” which meant I had hiked 13 km since leaving San Sebastián.  That 787 km seemed unreachable.  But here I was, walking one step after another, legs and feet so painful, and shoulders stressed with my pack. I reached the Albergue in Oreo at 5 pm, more exhausted than I felt it was possible to be.  But having learned one thing:  “I can’t” is not true.  I continued to be able to take many, many steps through the “I can’ts” in my mind.

I arrived at the Albergue and was greeted by Steve, a man from UK who now lives in San Sebastián.  He greeted me with: “Mate, you look f**ked.”  It seemed like the most apropos description of my state of being.

The hostess was super kind.  Speaking only Spanish, she must have seen the level of distress on my face, “Tranquilo,” (calm) she said again and again.  She pointed to where my boots could be placed. Tranquilo.  She showed me where to wash my clothes, (tranquilo) where to shower and where my bed was.  Tranquilo.  She said, “Tienes opciones” pointing to the sign behind her back at the small table she had in the entry area. I could pay just for a bed, or bed and dinner, or bed, dinner and breakfast.  I chose to have dinner that night, paid, put my pack down, lay down on the bed and cried.  I’d arrived.  It had felt impossible during the second half of the day.  But I had arrived.  I was surrounded by other quiet, quiet pilgrims in the dimly lit rooms. They were stretched out on their bunks resting, looking at their phones, and some sleeping.  I then showered, washed my clothes, and then sat down at 7:30 pm with five others for a three course dinner with three bottles of wine all for 10 euros.  There at that table sat Helmut and Gunda, a couple from Germany, Steve the UK guy from San Sebastián, Rafa from someplace in Spain, Anton from France and me.

The conversation in Spanish and English and German was lively, varied, led mostly by raucous, carnal, and boisterous Steve.  In his late 40’s, Steve was authentically and brazenly himself.  At one point Steve launched into the worst story I have ever heard told in a public or private setting. Looking back I had wished I had had the wherewithal to stop him, silence him, or just had launched into another story entirely to “cleanse the air.”  At the end Helmut looked over at Steve and said, “Feel better?  Was that cathartic?”  Steve laughed and the conversation shifted.  Later I felt so awful still. “Lord, I’m pitiful. How do you love me still?”

“Your mistakes will never thwart my plans. You will grow,” God responded.

Everyone was asleep when darkness came.  I awoke before light.  Made my way with all my things to the entry area, repacked and began the journey through streetlights of Oreo with steps toward the next destination.