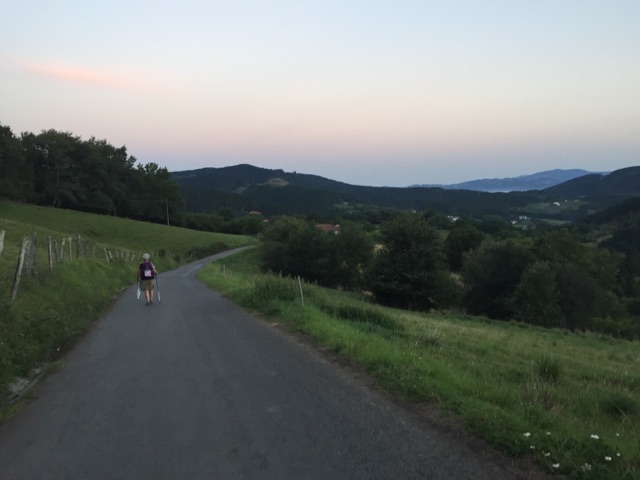 A knock came to our door at 650 am. I had just awakened at 645 and had asked Markus for the time.  I was astounded. This was the first time I had slept so many hours since I began this journey.

We packed up and left at 7 am each walking alone.

I’d realized that I did not want to be known as a pastor on the camino. I knew that “clergy” carried a heavy, negative connotative meaning in Europe.  Tax supported churches, politics that determines the creed for a region, irrelevance, all contributed to bitterness.  Markus described how in his region in Switzerland his congregation’s creed had changed three times in four years as leadership changed in the government!  So I described myself by what I did–  the leader in a religious nonprofit, counselor and storyteller.  The reactions to this were interesting but it did allow for an open door for conversation.

In the dim light the journey out of town was up the cobblestone streets, up a long steep hill, past another ancient church. After winding up out of town, I stopped at a bench overlooking a vista that was beautiful. Off into the distance was hill after hill covered with dew-covered grass, trees and farm animals. The morning air felt close, around 70F already with overcast, foggy skies.

Many walked passed me as I sat there.  We bid one another “Buen Camino.” 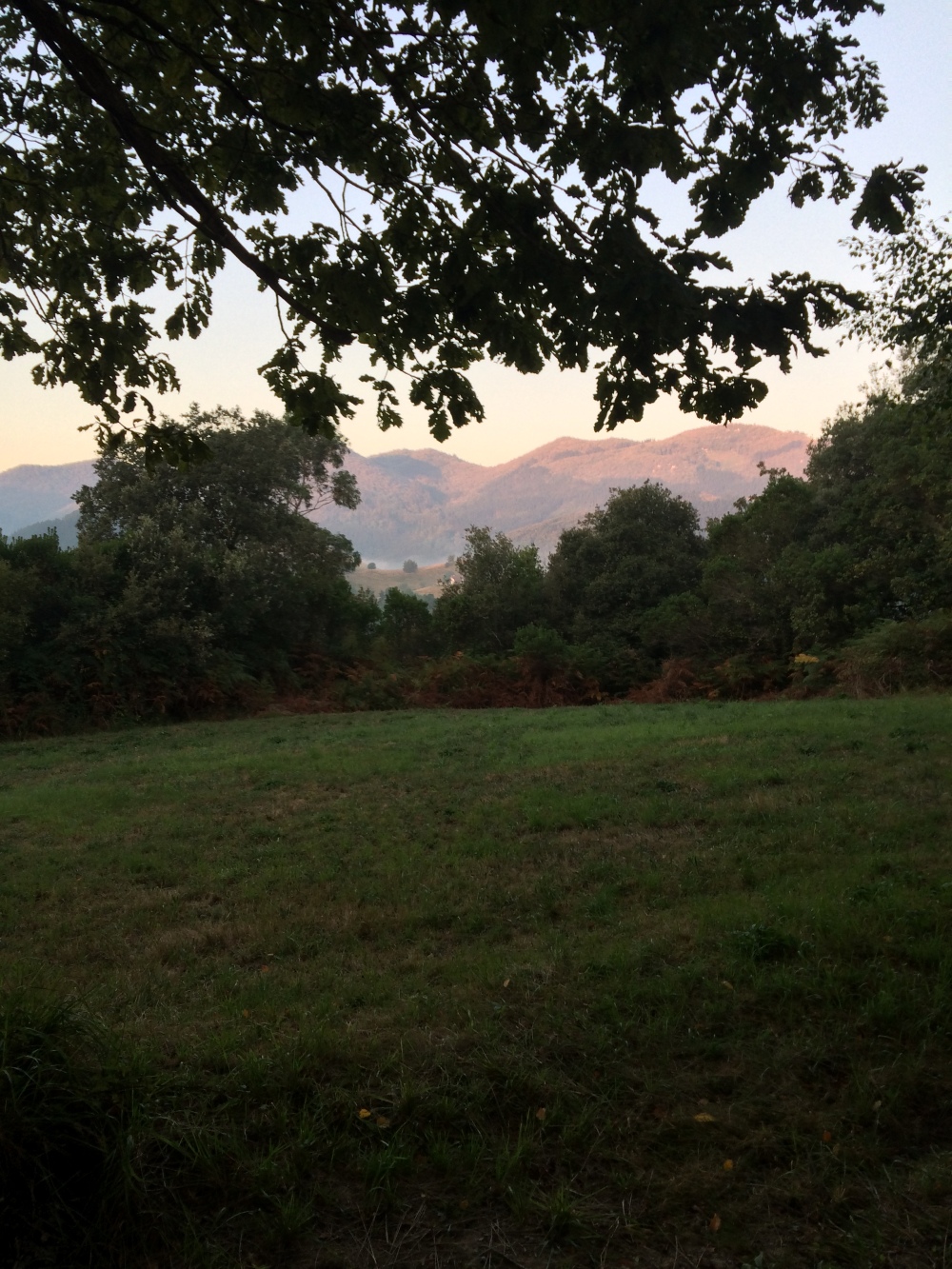 When I walked on, I came upon the three American women from Massachusetts.  Jill was behind her sister Claudia and good friend Jane. They are all grandmas probably in their 60s.  They’d tried to get out of the convent at 6 am, wanting to start early. But the hostess would not unlock the exterior door until 7 am.  So after awakening at 530 and getting up, packed and dressed, they found themselves prisoners (!) in the courtyard where they had to just wait for a full hour!  Needless to say, they were not happy about that! I was glad I’d slept in!!

I walked and chatted with Jill and then with the three of them as we caught up together. They were looking forward to a “café con leche” at an upcoming bar for which we had seen a billboard advertising its services.  It was continually just around the next corner.  We talked about various things and then reached the bar. Closed!  But standing there were Helmut and Gunda with Markus.  We greeted them and Markus said he was planning to walk another route — with less markings- on a route that would take us closer to the coast.  I was for that.  So in that moment I just dropped my American companions, never said goodbye, and launched off with Markus.

That day’s hike was magnificent, challenging, even confusing without signage, multiple backtracks, and eventual successes. We walked through fields, on country roads, alongside residences and even came upon this off-road cafe that I had to wonder how anyone found. We got lost numerous times and got found again. The best was when we began to hike up and down along the cliffs alongside the ocean.  The views were splendid.  We would hike from sea level up to around 600 feet then back down again. 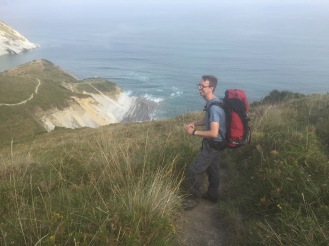 We paused for a snack. Markus saw me eating a celery stick and asked, aghast:  “What are you eating?” He could not imagine anyone eating celery raw!!! I said his opinion was shared by my son-in-law who thinks I’m part rabbit.  For the rest of this journey check out this previous post.

As we walked, we shared our journey in faith, Markus’ feelings about church, about Jesus, about theology and beliefs.  He had wanted to be a priest but that was before he had experienced what he had experienced as the hypocrisy of the church and the state’s control of the church. There on the camino we enjoyed this freedom to have doubt and faith together in conversation.  It was a very “camino conversation.” Markus looked, acted and thought so much like my good friend Bill Seagren, it was like we were old friends.  As we talked the verse that came to mind was: “Eye has not seen, nor ear heard, neither has it entered the human heart, the things that God has prepared for those who love Him” (2 Cor 2:9).  I prayed for Markus through that day.

We arrived in deba at 1230 pm and bumped into Gunda and Helmut on the promenade.  And as they were planning to go to Izarbide we also continued up the hill after lunch, at a slower pace because of my bum leg, arriving in the late afternoon at this breezy, hilltop, private Albergue.  The warm balmy evening made a perfect environment for drying our laundry and at around 6 pm we walked down to the only open restaurant up there.  The owner scoffed at us wanting a table then!  He said, “If I tell my cook I wanted her to start cooking now, she would come after me with this” he said, raising a butcher knife!  Dinner started at 8:30 pm usually, but for us, he would open a table at 8 pm.

It was Gunda, Helmut, Markus and a jovial guy named Ben from England who joined together for this meal.  While waiting for the restaurant to open, we walked down the hill to an overlook and stood on this open parking area, in this cool breeze, near another closed restaurant, chatting.  Ben and I stood next to this magnificent view.

I learned he had grown up in Torquay, where I had visited friends who used to live there numerous times. It seemed an unlikely coincidence. I told him  I managed a nonprofit, am a story teller and help answer people’s questions about God and life so kind of counsel them.  He was pursuing an internship in law.  He and I chatted about many things, but came back to his own search for faith, his current disbelief in God and church, and what had brought him on the Camino.  In our conversation, I was reminded of the book  “Who Moved the Stone” written by a British lawyer Frank Morison years ago who had set out to disprove the resurrection, but in the end, totally proved its historicity to himself and came to faith. God gave me this marvelous opportunity to share what I had discovered about God in my walk over the years and even on the journey. Ben responded, “Of all the reasons to believe I have heard, that one is unique.”

Once we got to our table and ordered this huge meal, our conversation was spirited, joyful, relational, and filled with laughter.  It was this incredible experience in community.

That night I awoke after four hours of sleep.  I was hot and couldn’t get to sleep again because of my painful leg. So, I got up at 3 am, wrote, stretched, and prayed. I was continuing to read through the Bible, and that morning noted down these passages from Lamentations.  God’s lament over the people: “For your wound is as deep as the sea, who can heal you” (2:13).   And this description of God’s character:   “For no one is abandoned by the Lord forever. Though He brings grief, He also shows compassion because of the greatness of His unfailing love” (3:22). I prayed for the God of such compassion to move in the lives of Markus, Ben and others.

While I waited for dawn, I read encouraging words written into my journal:  “We will be with you day after day as you complete your walk because you have been a blessing to us all and you are in our hearts.”  “Our God will supply all your needs, as you face new adventures every day.  I am thrilled for you and your time to commune with nature, with God, with others you meet along the way and your time of self discovery and revelation.  Know that we are holding you in our prayers…”

The support with which I traveled amazed me.  As I sat there, Ben got up early, said goodbye before he headed out into the dark with his headlamp.