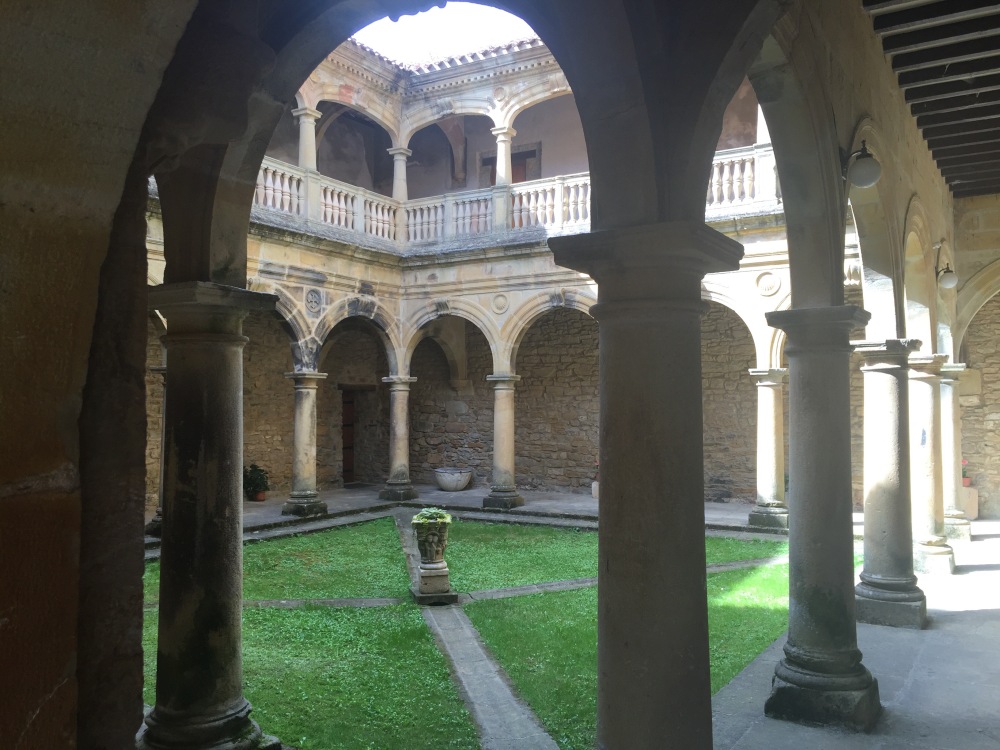 We all awoke early, around 6. It was dark still. I sliced the baguettes left by the monastery for the breakfast (snack) and the packets of hot chocolate, instant coffee and the container of milk on the table outside on the still dark balcony. The only way to heat up the milk was in the microwave. Carl, the big Swede, who looked like he could model for GQ, popped his cup in there with milk and set it for 3 minutes and walked away. He was so mad when it overflowed. His curses lit up the air. I was thinking – “It’s not really the end of the world.” The cup was too hot to touch, but he touched it, and yelled and cursed more. He reminded me of Gaston from “Beauty and the Beast.” Clearly it was not a good way to begin his day.

I helped him clean up, and get more milk heated. Mario, Fernando, Alberto, Frenzie, Steve, and now Carl and the others gathered, ate bread, drank chocolate and began to hike off into the morning as dawn was breaking.

I packed all my stuff up and moved out of the room, not knowing what the policy would be, but normally an albergue insisted you couldn’t “move in” until the afternoon.

At around 7:30 am the monk came and checked the room, and then checked me back in for the coming night! I noticed they didn’t clean the rooms quite as often there!?! The monk left the key in the door, which automatically locked, so I could wander around if I wished.

I wrote. “Day of silence. God had said, ‘Stop for a day.’ So here I was at the monastery, without wifi, sitting, overlooking this exquisite valley in this peaceful place.” I sat outside on the balcony, read scripture, prayed and wrote: “So, Lord, what would you have me do with this day?”

Here was the response I received:

So thus began my day.

Around 10 am after I had unpacked all my things and had them strewn all around the room, ready to reorganize, the monk opened the door and spoke in rapid Spanish, which I caught more than understood, that I needed to get my things moved out of the way. “Si, si!” I said, quickly piling all my belongings on my bunk to repack from there.

The three hikers who had arrived were my American Grandma friends I had met two days before. I’d hoped I’d see them, but did not imagine doing so at 10 in the morning! When I saw them I felt such a thrill. 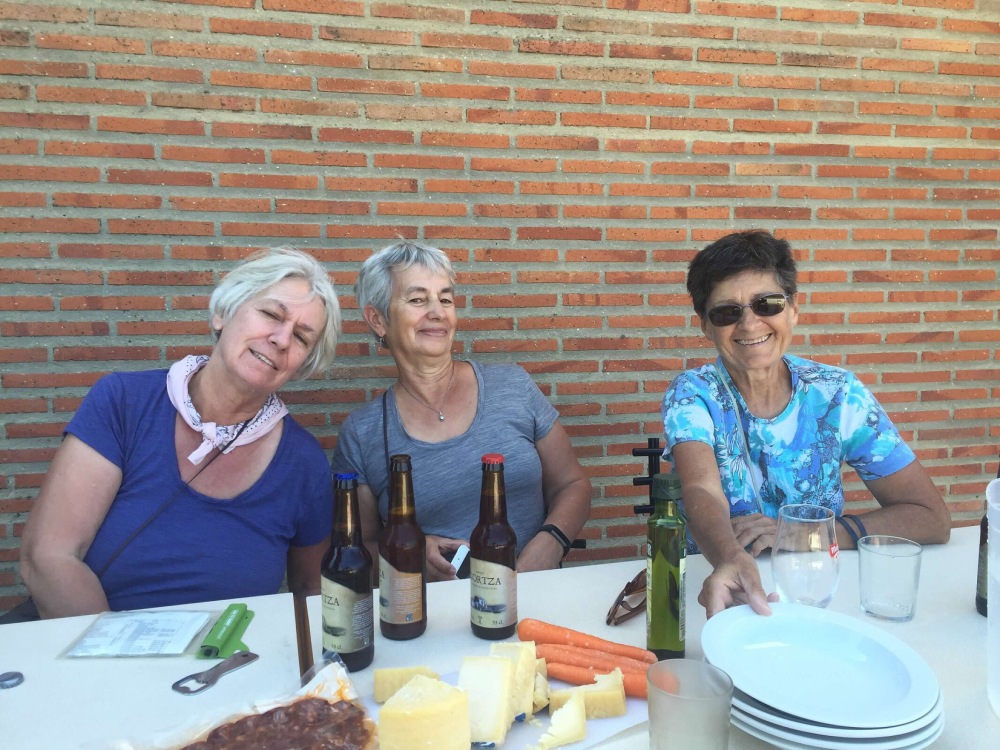 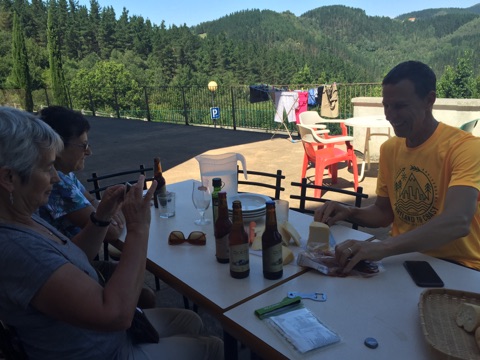 While they were washing their clothes, hanging them out to dry, and showering, I sat on the balcony, painting, sitting, enjoying the view. 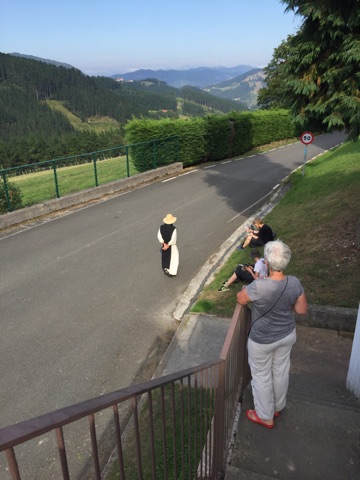 When they came back out to the balcony, I chatted with Jane, Jill and Claudia. Jane shared a writing her daughter had sent her to take on the camino which had encouraged her in the rigorous challenge of hiking the way. I shared this in a previous post title “Just the Next Step.” You can read it here.

She later wrote me: “I too, gained so much on the Camino, and am overwhelmed when I try to wrap my head around it!  I learned a lot about myself—some not so flattering!  I wanted a deeper knowledge and awareness of God, and was not disappointed.  I noted in my journal that it was a particular joy to run into you because I was feeling a real lack of Christian fellowship. Talking with you and seeing you live your faith was such an encouragement.”

We just never know the witness we are. Jane was such a gift and encouragement likewise to me. She caught pictures of me painting. 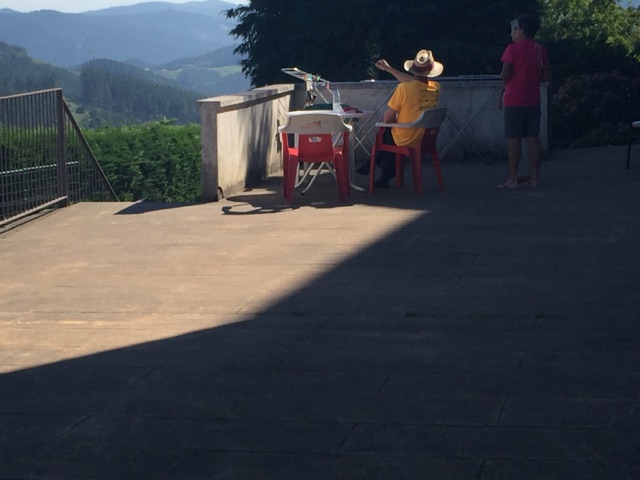 I rested as I needed to that day, and then, Jesus gave me this picture of welcome. People were beginning to arrive by early afternoon, so I went and got a round of cheese, some dark chocolate and several bottles of the Monks’ beer and set out the beers and the cheese on a board, and chocolate with knives, plates, and glasses. Whereas the previous night had been one of scarcity, I wanted this night to be a night of abundance. I ended up going to get more beer, chocolate and cheese.

“Welcome!” we all would say as people arrived. And then those arriving were invited to the table. I think perhaps heaven will be like this day was: Full sun, blue skies, magnificent scenery, and a welcome with food, drink, laughter, and a place at the table just for you.

Anton and Danny both from Spain, Lorenzo and Claudio from Italy, Nicole originally from Germany, but for the last 25 years living in Mallorca. Mark from Australia. Carol was French but lived in Barcelona. Nannette from North Carolina came in the late afternoon, looking winded after the trip up the hill, but filled with joy, kissing everyone on the cheek, for she had hiked with them previously. Anton and Nicole exclaimed: “We didn’t think we would see you here!” 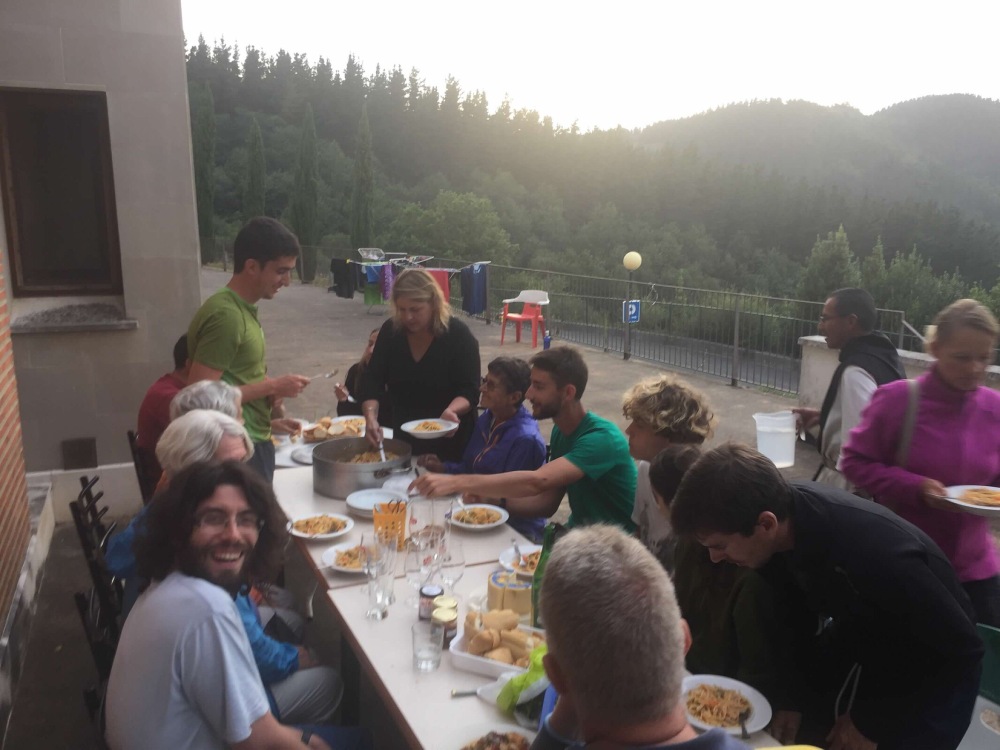 “I just had to make it!” She had helped a mother and daughter pair get care in Markina-Xemein, after the mom nearly fainted on the hike, and then once they were settled, could come on up the hill. 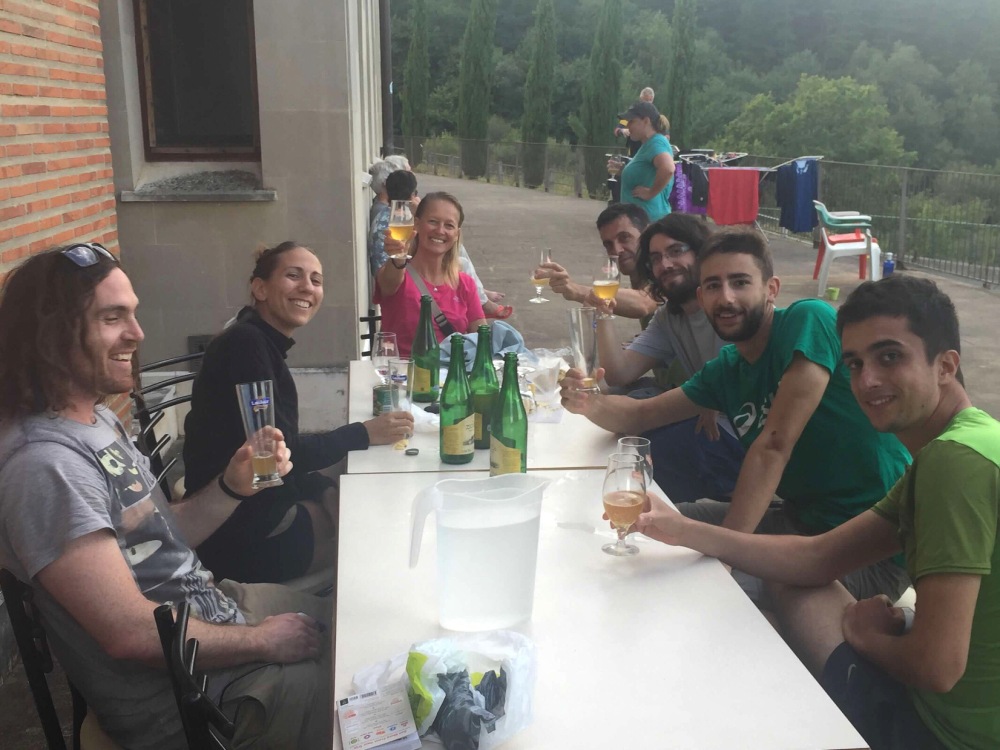 When we met Nannette, I felt like I was meeting an old friend. Then came Isabelle and Leon, a young brother and sister, both in their teens, and another man, Benny, from Germany. We welcomed them all to the table. We talked, ate, drank, laughed, and shared stories. And Lorenzo said to me, “I love how you laugh.” I don’t think anyone had previously said that to me.

After the vespers service, the monk in charge of the meal, had offered to bring me something gluten free. So, I had my own food. The hot food tasted great. I had not yet learned that I actually could eat bread and gluten in Spain.

This welcome and the gifts of food I had purchased brought me such a sense of joy. It was one of those moments where I knew I was not seeking favor or love or even recognition. I just wanted to love. And it felt so different from the many other ways I have sought to gain love in my life. I felt free.

Before dinner at the table, Nicole and I talked about why I had my left leg wrapped in an ace bandage. I described the issues I had had with it the first days on the camino. She asked about the pain, and what it had felt like when it had popped two days before. She said, “You know, I am an Osteopathic Doctor and I brought my acupuncture needles with me. If you’d like I could take a look at it and do a treatment.”

I was staggered by her offer. Who brings acupuncture needles with them on the Camino? “You would do that?” I asked.

After dinner, I sat down and stretched out my left leg in front of me resting my foot on a chair. She began to massage the leg and then took out the needles, and said, “Are you okay with needles?”

“Yes,” I said. Although inside, I was unsure about this.

She put in two needles right in the middle of the place where it hurt. She massaged the muscles with the needles in. She removed and replaced the same needles and massaged more. The muscle bled out around the needle. I felt a bit fearful about a possible infection. The fear kind of ate at my heart sitting there. I had to “talk myself down,” to not let fear lead. Jesus was there whispering, “Be still. Rest.”

As the leg bled just a bit, the muscle released and relaxed. “Ah,” Nicole said, “That’s what it needed.” The tension was so much less I was shocked. She took out the needles. I could walk. I knew that Nicole had just offered me a gift of love – just like the love I had offered to those arriving. It was clear to me that God had placed Nicole into my life, that night, to show me love.

Everyone began to head to bed around 9. But that night I did not feel tired. My stomach began to feel upset. By the time I went to lay down, I was burping and burping. The amount of cheese I had eaten was reacting with the beer and the chocolate was keeping me awake. I took some digestive enzymes and rhizenate, which were supposed to help. I lay there. The minutes seemed like hours. My stomach was cramping.

At 11 pm I got up to walk around. I was careful not to close the room door completely, for it would then be locked and I would be locked outside! I walked in the dark around the monastery. My stomach felt miserable. It hurt so much. I came and sat on the step outside of our room, fed bits of cheese to a cat who came to keep me company, 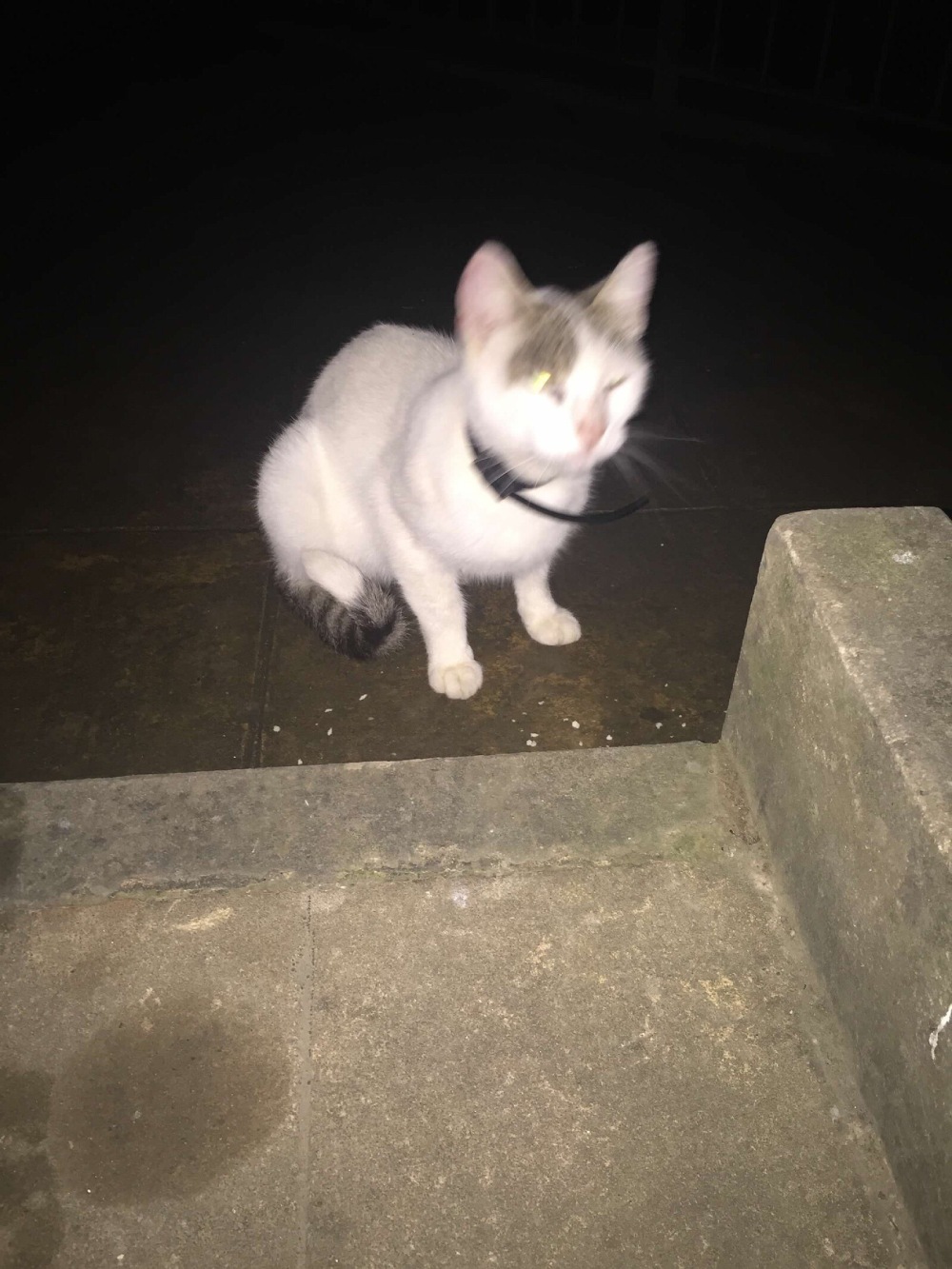 and wrote in my journal. I was still there burping, feeling awful at 11:47 pm. I walked downstairs to the bathroom, hoping that perhaps I would throw up. But I didn’t.

I went back to bed. But couldn’t sleep. I just lay there. The room was hot and noisy with three active snorers. I woke up having kicked over my backpack at the end of my cot and it had toppled onto the floor, breaking the edge off of my Camino Shell that was on my backpack. And it made what sounded like a ton of noise. I got up then and went to the bathroom again and then got up again a while later at 3:42 am. I felt rested by then, somehow, and my stomach had settled down. So as I made my way back up to the room from downstairs, I decided would leave.

When I got to the balcony area, there was someone else up. I saw their silhouette against the lamps. When I got up there, I recognized Nannette.

“Good Morning,” I said super quietly. “What has you up?”

“The snorers!” She responded. “I am on the upper bunk in the corner and it is as if all the sounds echo around my head. I haven’t been able to sleep at all.”

“Me neither, but for different reasons. I’ve decided to leave now.”

Nannette responded without pausing, “I’m coming with you.”

“Okay,” I said. “Let’s go get our stuff from the room as quietly as we can and bring it out here to pack up.” It took a few trips, but we had our packs, sleeping bags, sacks, food bags all collected outside along the benches. It was dark. The morning cool. The sky clear. The stars brilliant.

At 4:40 am we were all set, packed up and ready to walk, so we started off away from the buildings of the monastery and lights, across the grass courtyard to the path, which crossed the road and became a trail up into this pitch black wood.

I wondered about the wisdom of this as we began to hike up a steep, rocky path. “Do you have a flashlight?” Nannette asked.

“Oh, sure,” I said, pulling my trusty small LED light from the zipper pouch at my waist, turning it on brought a small circle of light to the path. The forest around us became darker still, but we hiked into the hopefully approaching dawn.