On Monday morning, August 29th, I didn’t pack up, but instead left my backpack and belongings in the locker at the Hostel, bagged up some bulky items to ship my friend’s place in Ireland, stuffed them into a reusable bag, took my money and passport, with a map in hand, headed out.

I followed the map passed the Floral Dog by the Guggenheim, and surprised myself when I found the post office after hiking down a long flight of stairs, around a building and up another set of stairs. It was only 7:20 am. They would open at 8:30 am. I walked down to the end of that block, found a small bar, got a table, a tea with hot milk, a glass of fresh squeezed Orange Juice, and some tortilla.

Tortilla is Spain’s delightful all-day snack food of potatoes, milk and cheese baked to a bubbly consistency. My piece that morning was hot out of their oven, gooey, and incredibly delicious. It was this wonderful respite. I ate, drank, and prayed, writing: “Lord, help me grow more. I want to be present to my feelings. I want to find me and find You. I desire to be close to You.”

As I listened, I heard this in response: “Child, you are enough. Follow. I have plans. Great ones. All I need is you to be available. My hand molds and shapes you.”

There at the small marble-topped table, in the brightly lit, wood-paneled, quiet nook of a bar in Bilbao, Jesus was sitting there and I felt such peace.

At 8:20 I returned to the post office and stood in line there with others. The metal grate slid up, the door unlocked, and the woman ahead of me and I entered. In answer to my unspoken prayer, they had mailing envelopes, the postal agent was solicitous, able to speak English, and sent my goods “home.” All those items weighted only 1 kg (2.2 pounds). But every ounce mattered at this point. I was grateful.

Those extra items reminded me of how often I carry around “needless weight” back home – the stuff of thought and heart which weighs me down, hinders my stride, and distorts my outlook. This Camino was messing with my heart.

After leaving the post office, I walked back to the Floral Dog, to meet up with Carolyn and Nannette for breakfast before we parted ways.

Carolyn was heading home to Barcelona. We met then wandered around finding a bar, ordered more food (my second breakfast!) and teas and coffees, and sat sharing about what we had learned, about me getting lost the previous night, and the plans for the day.

On her first night in Spain, Nannette’s ATM card had left her – like Frodo’s ring! She had had it, and then didn’t. She believed she had dropped it at one point, so had retraced her steps, but to no avail. Her first week on the Camino had been filled with attempts to get a new card, which involved nearly a 2-hour phone call to the states, her bank shipping of a new card to an address that could receive it in Bilbao, and the promise that she would be there for it. The card was due to arrive that afternoon, so she would wait to leave until she had received it.

After breakfast and sweet goodbyes, I walked back to my place and packed, got directions on how to use the metro and rode to the end of the line at Portugalete. I stood on the train, in my pack, with poles, aching feet but a heart ready to walk.

Outside the metro station at Portugalete, I stared and stared at the city map trying to discern how to find the “Way.” Not, understanding, I asked others standing there, and this man said, “Follow me!” in Spanish. He led me at a brisk pace through the town, showing me how the “yellow arrows” were actually symbols set into the pavement. He walked me passed this glorious fruit stand selling figs, but I had to follow on! These were the first figs I had seen and gave me great hope!

At the edge of town, he pointed across a bridge and the arrows of the way. I thanked him profusely and walked on over the bridge following the way to Pobeña.

Eventually, I caught up to this gent in a white hat walking behind a woman with walking sticks and an Aussie hat on.  I met their pace and got acquainted with Lloyd and Jan from Australia hiking with their friends Pete and Barbara. In a brief time, I heard their life histories. They had invited twelve couples to join them. All were enthused then dropped out one by one until only Pete and Barbara came. She told me of her foot surgery and long recovery, which had delayed their departure. The conversation was percolating along, then ended suddenly as they stopped for a break, and I strode on. Alone.

Walking alone felt simultaneously great and lonely.  I missed companions. I missed Markus and Nannette and others with whom I’d hiked. I missed them, but was also grateful to be alone. The air was warm but not hot. It was a refreshing difference. The bike path along which the Camino travels was so easy to walk, it was nearly boring. The arrows easily spotted and followed. This was what I had imagined the Northern Route would be like!

I arrived at the coast, the Playa de la Arena, about three hours later and the small beach town of Pobeña. The sea was beautiful!

I was thrilled to see the coast again. I was glad for a shorter day. I asked at a tourist information booth about buying insoles for my boots there someplace, and she pointed me to a small, no a tiny shop just steps away with the catchy name above the opening: “SHOP.”

It was about the size of a really small, drive up coffee stand. There inside, with every kind of toy, kite, t-shirt, and knick-knack possible hanging all around me just within the entrance, there before me was a refrigerated counter, which held packaged, pre-cooked sausages and meats and a few cheeses. The man had soft drinks, liquor and a few vegetables and fruit. He was (get this) the only grocery store in the beach community of Pobeña! And with everything he did have, insoles were not among them. He told me my best bet would be a pharmacy in the next community Castro-Urdiales, about 17 km away.

I bought a few bananas, salami, water and an Aquarius, ate and drank a bit there, then hiked down beach. The path led right along the beach, through a parking lot, onto a boardwalk over the sand, across a bridge over an inlet from the ocean, that looked like a very inviting swimming area, to the albergue. It was only 1 pm and check in was not until 3 pm. I met up with two other pilgrims, Daniel from Madrid and Manual from Italy, so we got a table at a local restaurant and each had this huge “three-courses including any drink” Meal of the Day for 10 euro each.

We had a great, easy time of sharing life, jobs, hopes, dreams and the journey as we ate amazingly large meals, in this tiny back room of the restaurant at a table butted up against this window through which streamed the bright afternoon sun.

We heard there was a huge line forming at the albergue and that it was filling up! We made our ways there to wait to register. The man checking folk in seemed to have had better days. His balding head, crooked glasses, and crotchety attitude surprised me. No happy welcome here! I tried to observe what he asked those ahead of me, wanting to at least be able to form the necessary answers in Spanish, but nothing prepared me for what occurred.

I answered “Irun,” for I thought he had asked where I had started!

That angered him, he looked up and again asked:

And then abruptly translated in English for me, saying, “What is your age?”

I had only made it to the 40s in my Spanish lessons!

I don’t know what caused this. But then, with a line of people behind me, not having the best day, he decided that that was the moment to teach me my numbers in Spanish:

I tried repeating what I believed I had heard, realizing he wanted me to learn my age in Spanish.

He repeated himself again, slower this time:

I tried again and failed!

Back and forth we went every time him saying the words more deliberately and more loudly.

Finally he dismissed me to find my bunk and helped those behind me.

Later Daniel, my lunch companion from that day, told me that outside he and others were cracking up for it sounded like a preschool teacher with his students saying slowly and loudly: “FIF-TY-SEV-EN!” again and again. We laughed.

The albergue was filled. People placed in tents owned by the albergue outside even. There were 24 crowded on the bunks in my room and an additional 16 in the other room. One man panicked for he claimed to have killed a bed bug and gathered his things and left along with two other girls following. Kind of stirred us up for a time. But I checked the mattress, like Nannette had told me how (from her research!), and there were no evidences of bed bug activity at all.

I dug out my flip-flops and walked down to the ocean inlet for a swim. I swam in my underwear not wanting to get tomorrow’s clothes wet. I was too tired to swim too long, and needed to get back to the albergue to do my laundry and hang it to dry.

But I enjoyed that swim immensely.

After doing my laundry, I wrote some in my journal, walked back to the SHOP to get some food for Nannette and others, then sat and laughed and talked with Nannette, Claudio, Lorenzo and Manual. Nannette and I strategized about the next day.

Later that evening many of us walked to a bar near the albergue, and had a table filled with food, drinks, laugher and joy. 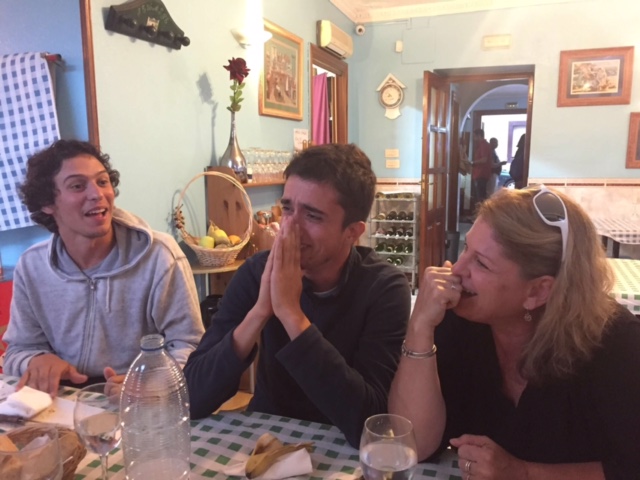 We got back to the albergue at 9 pm and all went to bed. The bunks were rickety and groaned all night. Getting down for a nighttime bathroom break was especially crazy, wild and challenging! Real times on the Camino! I slept well.