We left early and hiked through the small village of Cuerres and then into another small town where we found and stopped at the first coffee shop open. Grace needed an espresso. There was a wild group of locals in this bar, who were loud and raucous. They were still celebrating the holiday from which we had seen the parade a couple days before. We discovered they had literally been up all night drinking. A party of three, two men and a woman, came out and stood by our table leaning in toward us, too close, sharing in blurred speech and alcohol breath of their antics. As they went off staggering down the road, we chuckled, finished our drinks and then began our hike. We had 22 miles to go on this day.

Because the hike was rated as easier, we packed our boots and wore casual walking shoes today. Those were the ones that we had usually only worn around the albergues.  This made a huge difference on my feet. For the first time since I began this walk, I had no pain today other than normal muscle pain.

The walk was beautiful. 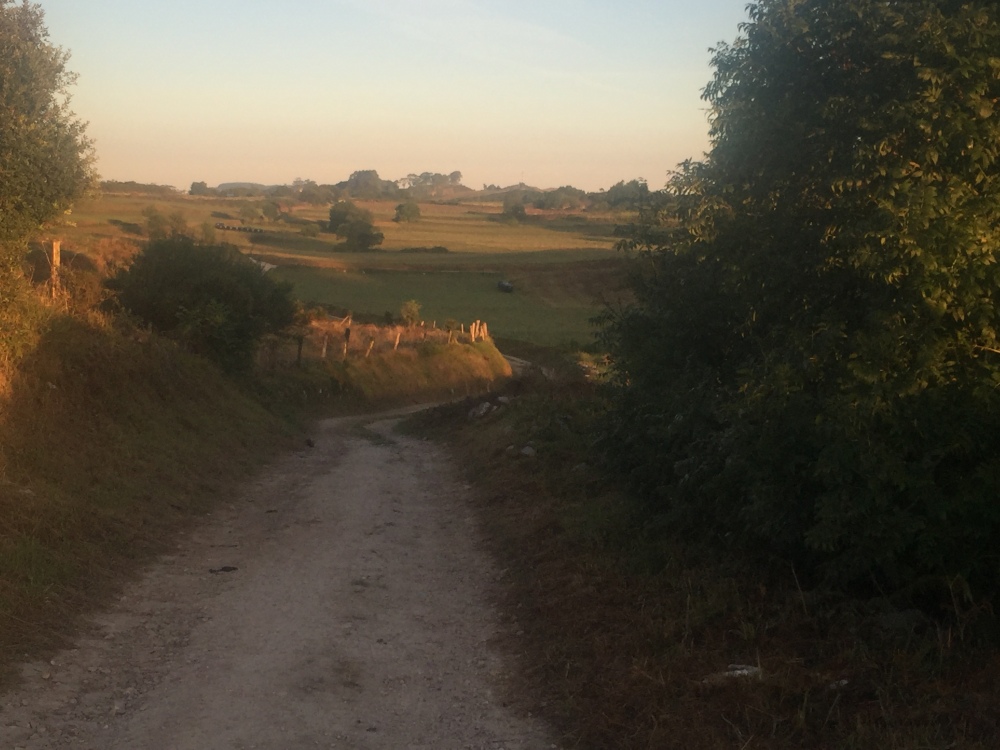 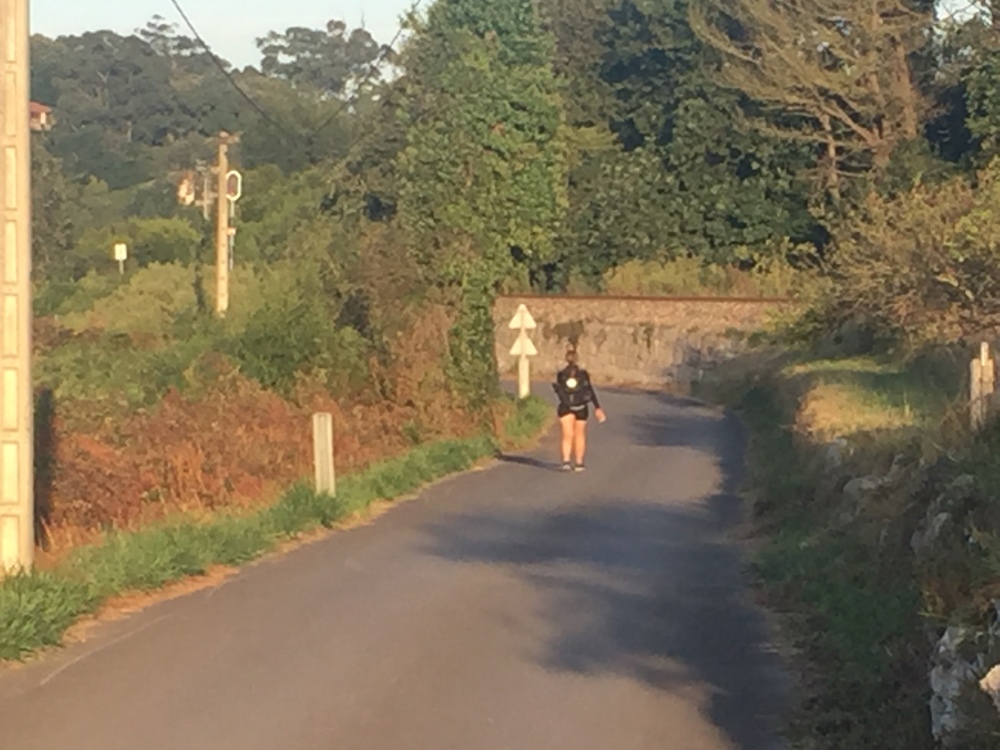 How was it possible that this place could become even more beautiful?  The landscape was incredible. Rich hues. Varied vegetation. 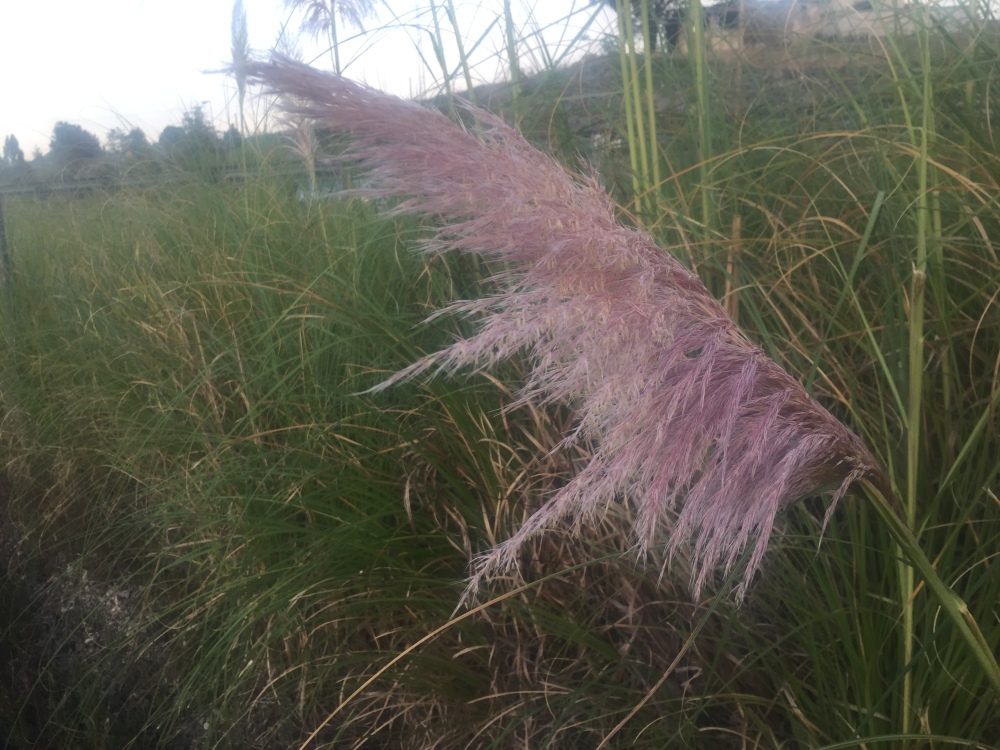 It was Lovely, with cows, flowers, houses of many colors. Then there were mountains that cascaded down to the ocean. It was majestic, rugged, spectacular. The beaches were simply idyllic.

I learned that there was this immense gift to traveling with this adventuresome Grace!

She noticed everything. Flowers beckoned to her and she stopped and took their pictures.  The animals she saw around us, thrilled and excited her. She would greet them, saying, “Hey, looking good squirrel! Love the hair! It looks terrific.” She pointed out the colors of buildings and commented on the sounds that the birds were making. She loved the beauty of the hydrangaes and begonias and some other waxy window flowers. But mostly Grace delighted in the people.

She announced on this day: “Latin women are the most put together and the most beautiful of all women in the world.”  I loved this observation.  It felt so random to me, and was certainly not something I had noticed.

Because of her comments, the things she saw, the way she pointed out things to me, I noticed life around me so much more. Through her words, my world came more alive.  It was simply great walking with her. She tried chocolate milk that day at one market in Las Vega and we discovered, it tasted fantastic.  #chocolateaddicts 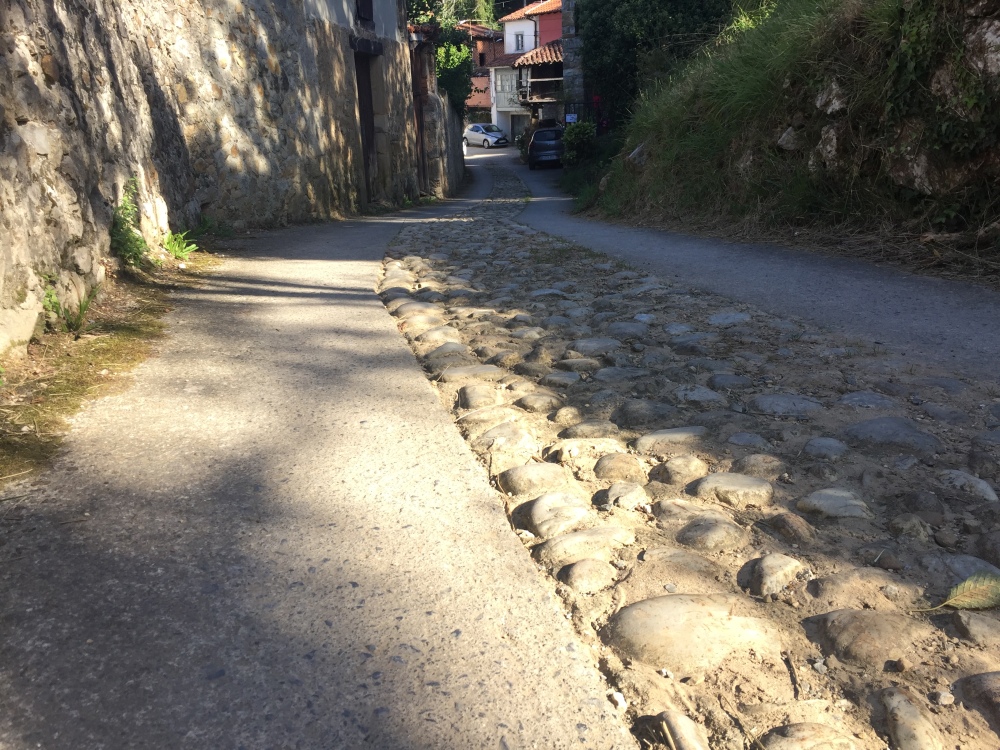 It had it’s own unique beauty. I ran out of vocabulary to describe the beauty seen. Colors everywhere, splendor, beaches, rivers. 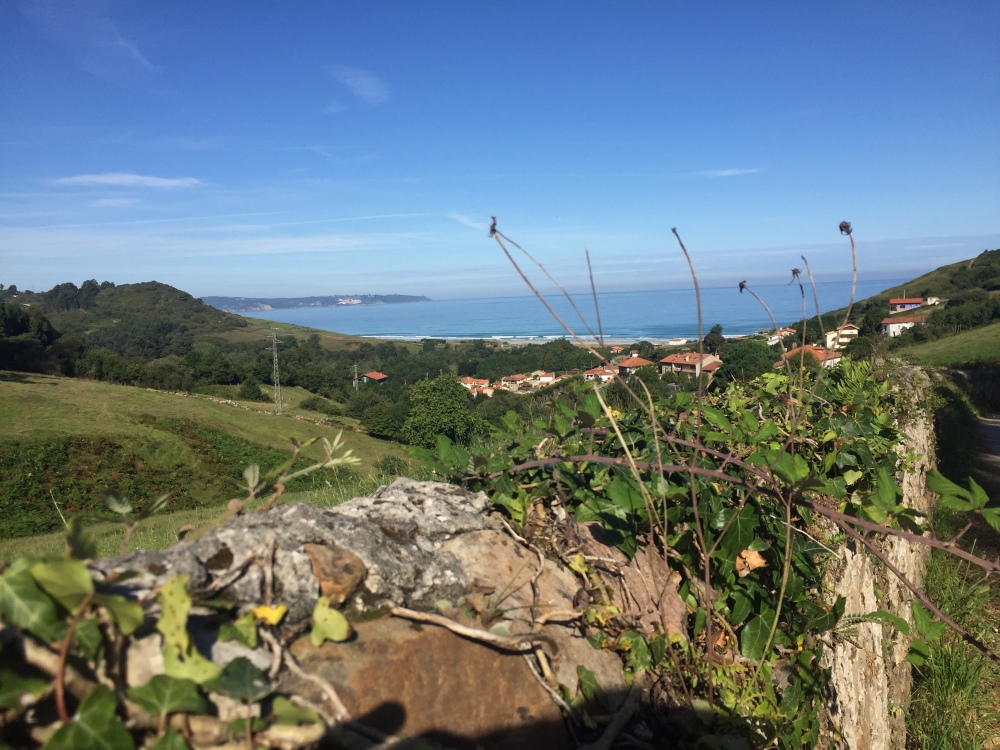 We walked through and out of the town on roads and then paths. We eventually wound down a country lane into the town of La Vega. There someone had painted multiple wall murals.  They were splendid. 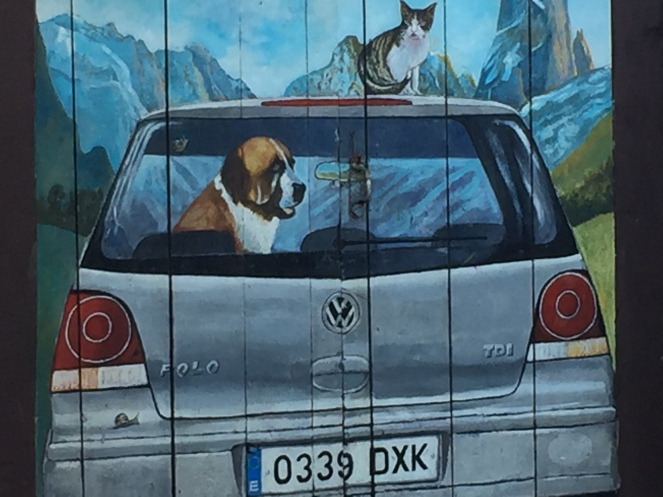 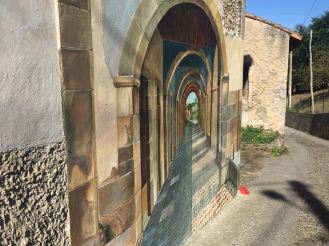 There was a market there and we bought some fruit and chocolate!. We decided to go to the beach to eat and when I saw the water I had to get in. So leaving Grace with our thiings, I dove into the surf and swam. It felt wonderful. Then we ate and I polished the sand off my feet and got shoes on and we started off walking up this path that wound up this mountain alongside the sea. 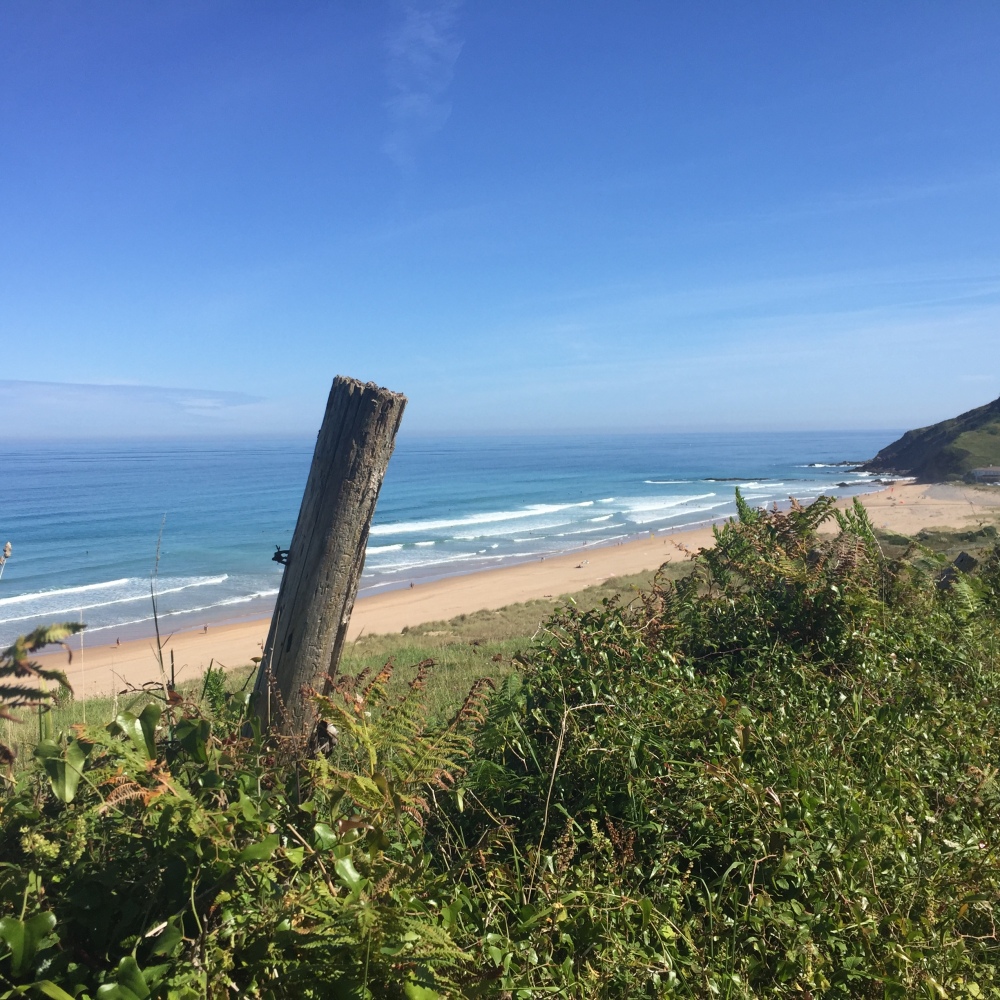 This was the longest walk through towns, countryside, up steep hills and down to the beach and into cities. We passed La Isla and went up away from the beach to Colunga, where we bought groceries for the next day, and then hiked through the countryside to the villages and met a woman from Philippines who walked with us a ways, clicking along with her two walking sticks.  She wore a variety of bags over her shoulders.  She had decided while on vacation in Spain to walk the camino, so had gone to the equivalent of a dollar store and outfitted herself.  She was a remarkable, ambitious walker, dwarfing us both. She had walked one 60 km day! We wondered how that could ever be possible, staggered by this our 40 km day.  .

Our companion walked ahead, and we stopped for a rest, when Grace said:

I’d had the snack food at the beach about two hours earlier. That was plenty, I thought, so I answered:

At that we came down a hill and saw a fancy restaurant. I said,

“Look there’s a peregrino menu at this place.”

We stopped and sat at this outdoors table with our packs next to us as people arrived from the town dressed up to come eat at their beloved restaurant. The food was incredible. After eating the beautiful beef and potatoes and salads and bread and yogurt, along with two beers, bottles water and tea (all for less than 25euros) I felt like 1000x better. Grace was right: I needed food!

The walk from there was long. 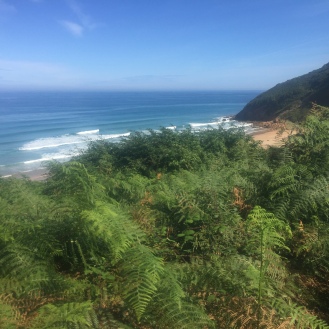 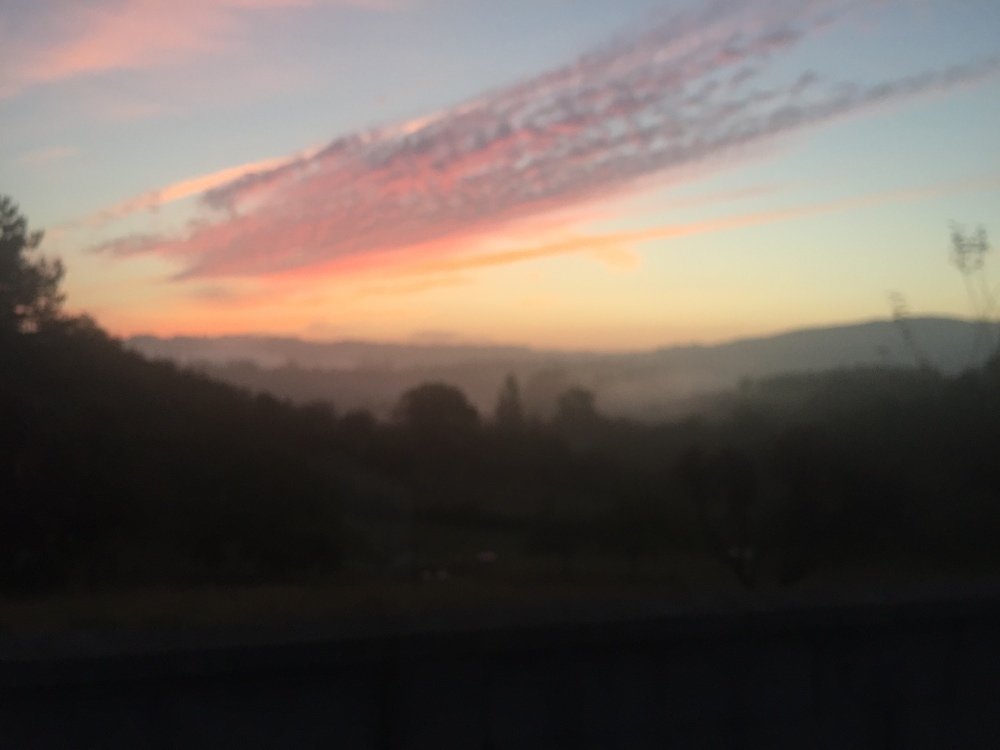 There was a food truck that came so we bought a few things for dinner. I felt exhausted. By then, my feet were complaining.  There was no internet in the community, so no possible connection with home. At this place there was also no drinking water. All the sinks, showers, clothes washing stations had signs that warned against drinking the water. We bought bottled water. I washed my things out but there was little chance they could dry. It was a cool evening.

As I was hanging them out in the dark, our Filipino walking companion from earlier that day went tapping by saying she had found a place to stay that was only 6 km down the road.  She was like a walking machine!  Nothing stopped her.  By the time we had arrived in Sebrayo, I could not imagine taking one more step.

During the day, we had talked about Grace’s work at her salon.  She was making great choices with her business and her finances.  I was impressed by her.  We also began to dive into questions for me.  Grace asked what I would like to change when I returned home. And we talked about my life and what I longed for. I had not considered her questions before.

So at the close of the day, I found myself pondering:

What do I hope will change in my life!  Attitude? Focus?

How have I been impacted by and learned from the people I have met?

Then, and even more so: How have I been met and changed by the Camino? 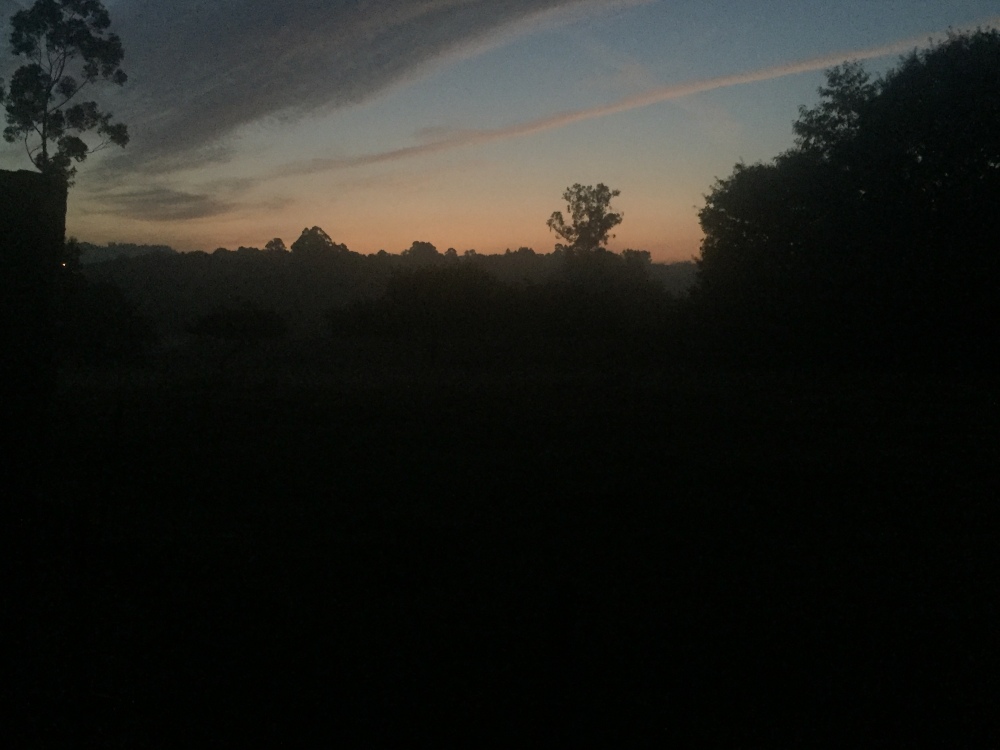