We left the hotel early, made our way through Gijon stopping to get cash from a bank, and to seek to buy a type of ace bandage for my leg.  The bus station was only a few blocks from our hotel.  My leg was hurting badly this morning.  We arrived at the station, bought our tickets for the trip, and went to a nearby coffee bar to wait and eat a snack.  Grace and I had decided to bus a fair distance.

There was this sense of loss in my heart in this decision, even though I knew it was necessary.  It meant leaving behind all those I had met along the way.  But it also meant that I might catch up to other friends who now were ahead of me.  That was the constant on this journey — friendships either left behind or regained.  That was a real life theme as well.

As we rode, we passed many backpacking Camino walkers.  I wanted to slink down in my seat, feeling a bit of shame, not wanting to be seen!  One thing I had been noticing on this part of the journey is how silent I had become.  I was perfectly content to not speak.  My life of faith had become quiet.  And along with that, my emotions were crazy.  I found myself second guessing myself, and wondering and wondering, “Who and Why am I?”

Around 10 am we reached the town of  Soto de Luiña, and began our hike.  It was a day in snap shots– Grace recounting the memorable trail that went up to a peak, and then down to a stream or coast,

only to head up to a peak again. 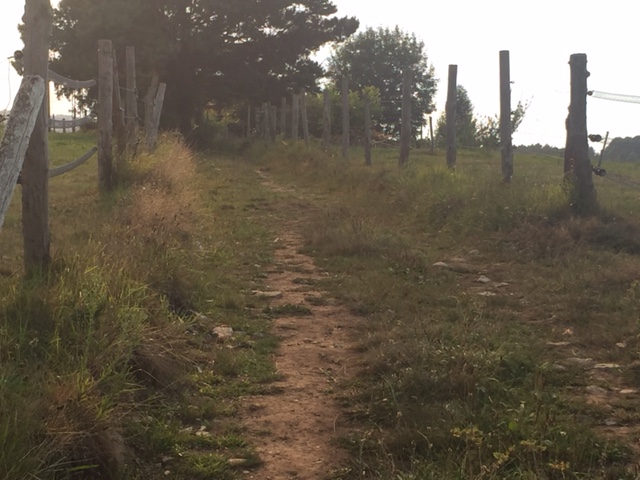 We stopped at a small bar that only served tortilla on a roll.  I kept thinking, “I’ll skip the bread and just eat the tortilla” (potatoes and cheese), but then thought, “Forget that!  I’m eating it all!”

The old man, lighting up his cigarette, who bid us in the low, crackly voice, “Buen Camino,” and Grace laughing and laughing as we both rehearsed what that greeting had sounded like to us.  Grace said, “Mr, you should walk! And read the package, ‘Fumor Morte!'”

It was a long day.  When we reached the destination, the albergues were full.  Grace had seen an advertising flier for one of them.  It was located on the way out of the town.  So, when we discovered that that one was full, we walked back up through the small town.

We stopped at a really nice looking hotel, but it was out of our price range.  The Campsites seemed too pricey too.  We checked at a private albergue, but the woman there had these vacant, frightening eyes and neither of us wanted to stay there.  Visions of the Bates Motel came to mind from the Hitchcock thriller “Psycho,” even though I had never seen it!

Finally I was done asking.  And Grace wanted to check at the one place we hadn’t asked.  It was a private home.  Grace asked, they had a room, they would gladly do our laundry, and the price was right.  The Family Astour was this great place to lodge.  It felt wonderful to finally be there and get to sleep.

The next morning we left our hotel at 8 am.  As we left it was overcast and cool. 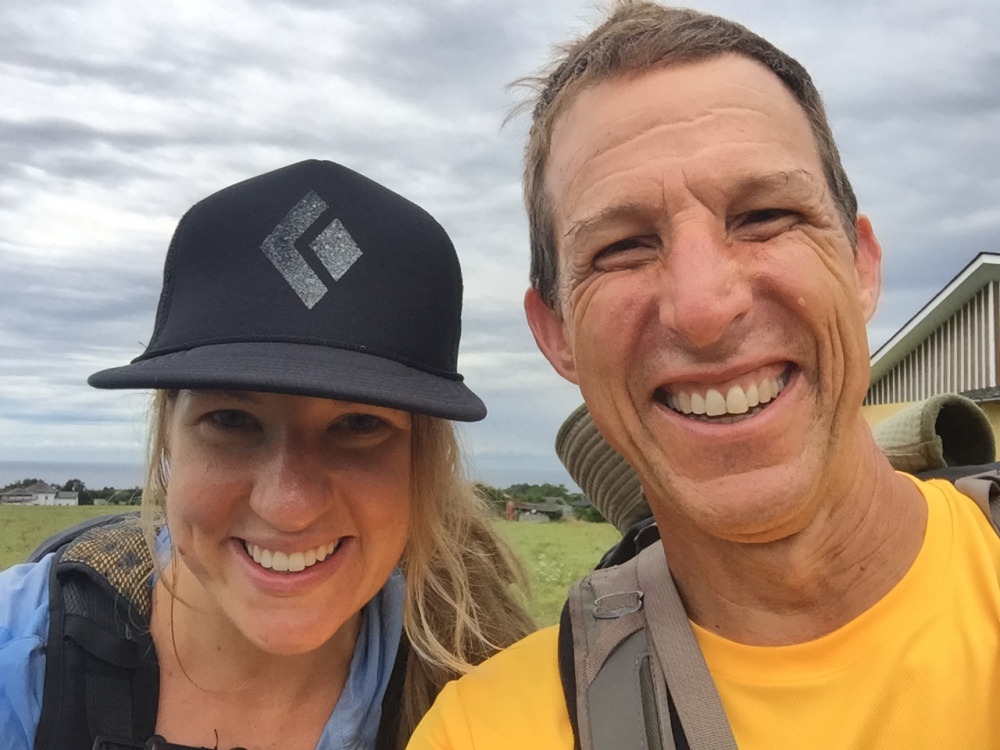 We stopped for me to tape my leg, and that helped.  The rain started after an hour or so when we had stopped for the obligatory espresso.

Grace said she is a coffee addict!  While sitting there, the rains began in earnest.  When we left, it was to walk or trudge off into this steady rain. 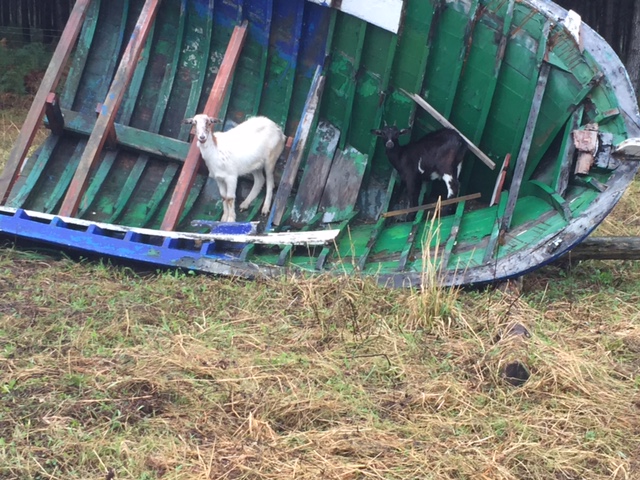 We passed through a forest trek and there met this old Spanish guy coming toward us.  He was short, carried an umbrella, wore a blue and white checked flannel shirt with jeans.  He stopped us to ask in Spanish if we were heading to Luarca.  When we said we were, he complained that it is too expensive there.  “Coffee is 2 euro!” he said.

After recommending we head to a place beyond Luarca, he hugged Grace goodbye, while grabbing on (!) and then shook my hand.  After that encounter we departed and laughed about it for some time.  Hearing what he was doing, I found his behavior incomprehensible.  Who does that?  Why do that?  Seriously! 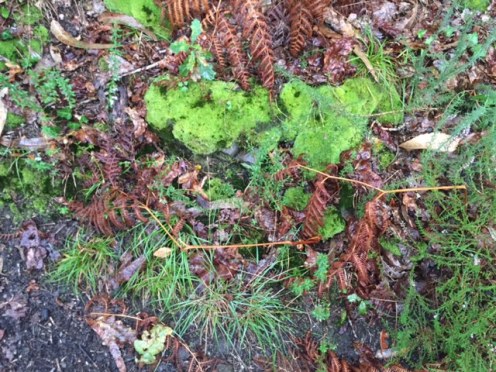 It wasn’t long after that, the rain continuing, Grace’s rain slicker wet through, that we stopped for her to get our her gloves. It was one of those moments when I reached to help with her water bottle, she snapped back at me sarcastically. The comment cut, for it sounded like I was being framed for something I had not done.

Both of us cold, tired, weary, something snapped in my heart, over such a simple thing, and then she said how I needn’t back away.  But I did need to for that interchange had broken trust, and left me bleeding. For a time I walked some distance behind her.

The heart is a delicate part of our anatomy.  Her words had echoed another’s and cut more deeply because of that.  We were able to return to this conversation breakdown not long later, and mend the rift between us.  In that conversation she said, “Dad, you don’t need to take this as part of you. It is my stuff. All my issue. So just let it be that.”  That owning of responsibility was a gracious thing, however I still was bearing the weight and pain of what had transpired. 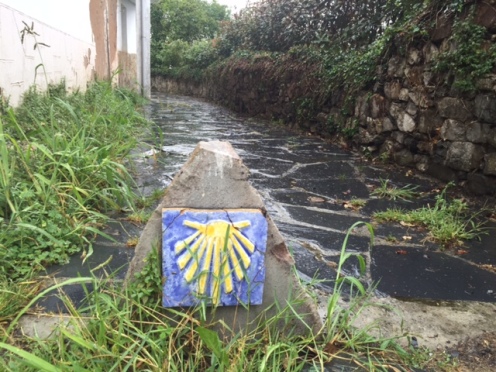 We trudged on in the rain and cold.  We walked on trails, through trees, then over roads and then for almost two hours we walked and walked and walked from the outskirts into the center of our destination town, Luarca.  It felt like a “forever” hike!

At one point as we walked Grace said, in the voice of our cigarette-smoking man, “If anyone bids me a ‘Buen Camino’ now, they will be taking their lives into their own hands!”  This broke any tension in the air and we buckled over laughing as we walked the cobblestone streets and finally walked down to the harbor and then up into the town center.

Then she said, “Whose idea was this?  Why did I think walking for so long would be a good idea?”  Her wonderful, ridiculous humor is something I cherish about Grace.

We began to hike up and up what felt like out of the town, so stopped, checked the guidebook and realized the Albergue was to have been located behind us.

So, we went back down, and eventually, found the albergue, they had space, we checked in, showered, got warm, hung out our wet things, and slept, wrote and just were quiet with the many other pilgrims there all recovering from a long day. In the shower tears came fast and furious to me.  It was like the emotions of the day all came out with the water falling upon me.  So many emotions!  Who knew I could feel so deeply!

Later, I wrote, “Father, I know that Grace is a powerful person.  And you know how that comment hurt.  When I am with her, sometimes, it is like I am the child and she the adult.  She even said that jokingly yesterday, ‘One of us has to be the adult here.’ It is like I get all tangled up.”  Having written that, I got this response:

We went out later for our evening meal.  We had a great meal, a good time together and eating helped immensely.

Later, I went back out to a bar and wrote my friend Mike Maxwell.

“I’m in this albergue and missing contact with you. Immensely. Grace has been here a week as of tomorrow and I feel like I am wearing on her. Or perhaps she is just frustrated with being with herself in this rain.  The cold and wet does get old!  And somehow I don’t remain a capable adult with her but more like a kid. That’s the pits!  This Camino is the most fascinating, difficult, stretching, challenging experience. I’m hitting walls inside all the time. I’m certain that doesn’t help with our relationship either.  I would love to be able to talk to you but don’t know that that is possible. So man, would you pray for me? And pray especially that in the next couple days I’m with Grace that it is a building and a deepened relationship that we end with not a broken one. I’m scared that this time with Grace will go south like after the backpacking trip from a couple years back, which might be why I stay little for that’s safer? I totally don’t know. The Lord gave me this message to be praying for her.  So yes, praying. Anyway. I love you. I miss you. I need you in my life and am reaching out to let you know that.”

“I was just thinking about you and wishing we could talk!  I’ll definitely be praying for you and Grace. … Be confident in yourself, you are a good man, loving father, devoted husband, awesome friend, so you don’t have to win her approval or respect or love because you already have it—rest in it and enjoy it.”

See why this man is such a good friend?

The bar I found was called “Colon” which is Columbus in Spanish, 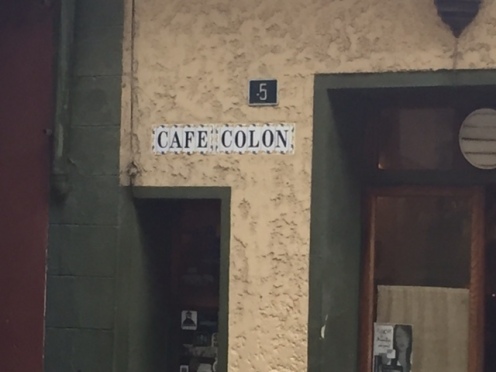 but if English would be a part of the body, and that caught me as humorous.  The place was a bit shady, like a mafia joint.  It hosted this strange collection of paintings, on dirty walls that had not painted since perhaps 1492!  There were advertisements of long past performances.  The sign outside said, “No smoking in the bar,” but the bartender and another guy had lit up. A study in contrasts!

When I returned to the albergue, Grace was writing some more, many were already going to bed and I went to sleep listening to the pouring rain outside, hoping it would perhaps rain itself out overnight.