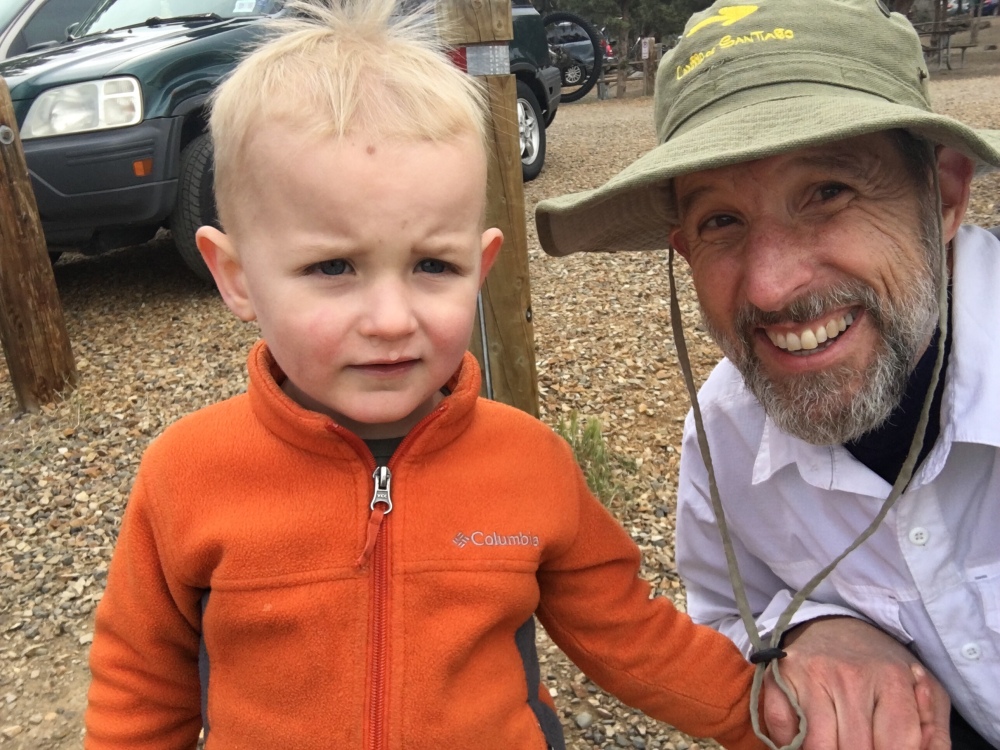 You may not be able to tell from this picture, but neither Theo nor I had slept well the previous night.  That previous day I had traveled from the coast to Smith Rock, about a 6-hour trip, with a few detours and rush hour traffic along the way, so the drive had taken me 9 hours. 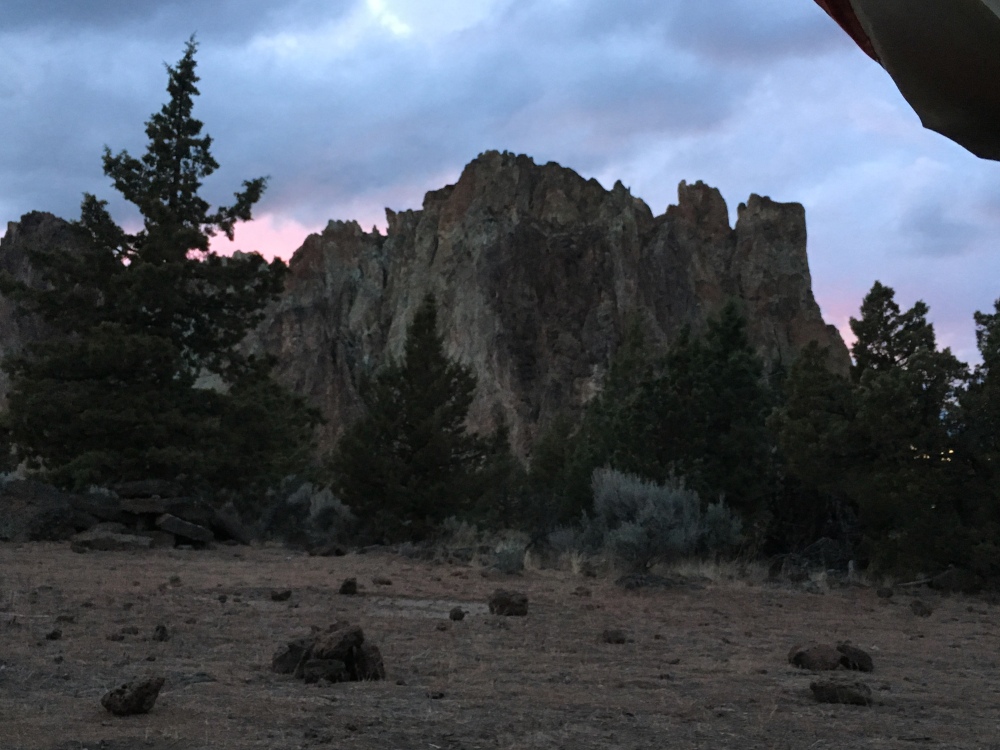 I had come from being ill, and 2 nights in a personal prayer retreat. I had had a great reunion with Susanna, Collin and the kids that night, and we had all gone to bed at dark.  But I had not slept. Something about the day, the night, the wonderful stillness kept me awake.  Then there was Theo.  He awoke around 10 and was up screaming for what felt like hours.

the schedule had been wrong!

The place was wrong!

The bed was wrong!

The night was wrong!

There was no light!

He couldn’t communicate any of this, but he was mad letting, what we thought must be, every other camper in the place know that THAT was the case.

The next morning we were all exhausted. While washing the dishes I had asked a man from Canada if he had heard Theo screaming.  “No,” he said much to my relief,” but all I could hear were the two snorers in my tent. And now that you are sharing, I’m thinking, I ought to be grateful for them instead of irritated.”  🙂

“Yes, giving thanks would be a great choice,” I advised, amazed at how a simple shift in perspective can change our thinking about a situation.

The previous day Theo had missed a decent nap, on top of not having slept, and so if nothing else, we all knew that Theo needed a real nap on this day. He would not be getting it where the Susanna and Collin wanted to go climbing, so I offered to stay with him at camp and hopefully get him to take that nap, while they climbed.

So they left, taking Gregory and Antonia with them, while I finished breakfast with my tired buddy, and we took a walk.

Now with the pace of the previous day especially, and looking back, of the past couple weeks, walking at a tired 2-year-old’s pace, was wonderfully slow.  He could take four steps to my one, and 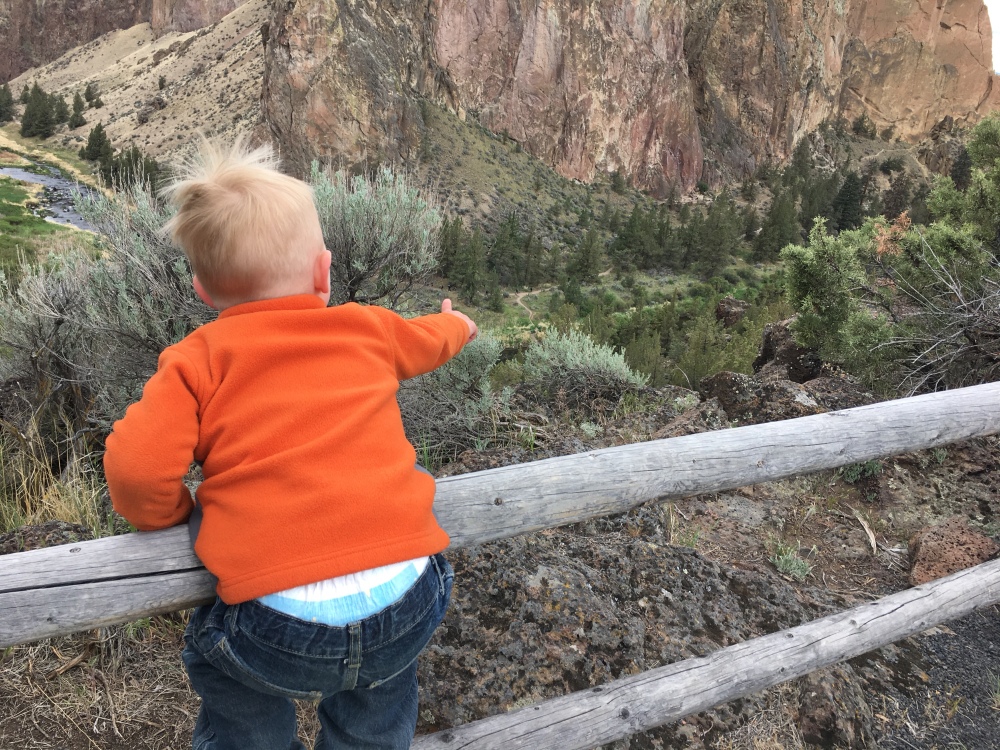 his steps were not moving quickly, so, I got to slow WAY down.  We strolled down the Rim Path and he thumped his feet on the boards of a bridge, climbed the fence and pointed over the canyon.

At one point we saw a marmot sitting on a rock and Theo was fascinated. 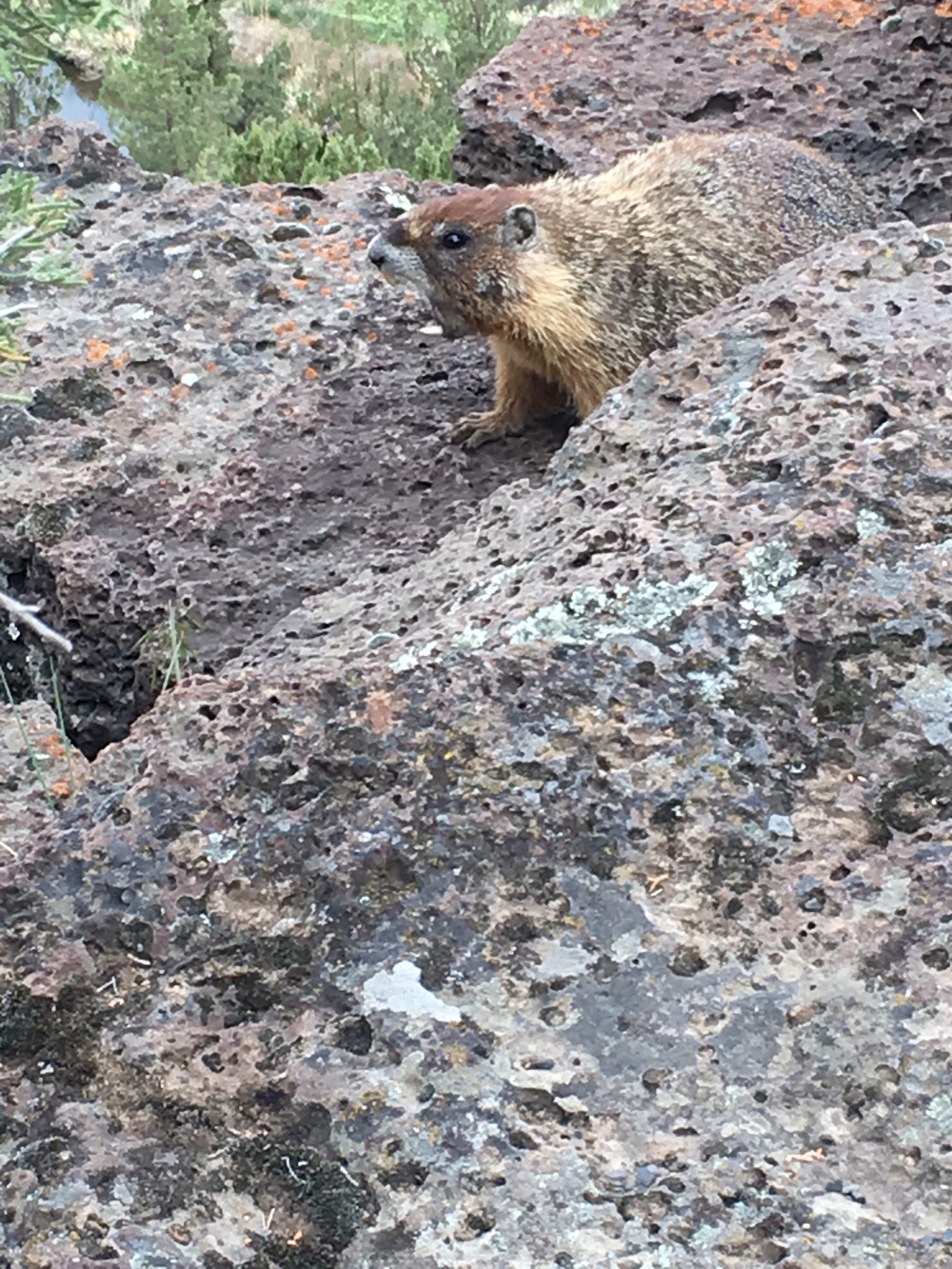 He looked at the marmot saying,

That was so sweet to me.  He was so honest, so willing to just “be present” to that marmot.  He was not rushing past. He has not learned the so-called art of not really experiencing anything but just taking a picture and moving on.

I told him, “Well, perhaps not hold him, buddy.  Mr. Marmot would not accommodate your desire and might not be the safest creature to get near to.”

He and the marmot eyed one another unmoving, for quite a while.  Both exhibiting a patience with just being.  They lasted much longer than I expected for either of them.

While there an older woman (to even write that makes me chuckle, as I am now at the age of what many refer to as old!) came up telling us of an eagle sitting on her nest with two eaglets around the bend of the trail. After Theo had bid goodbye to the marmot, we walked along the trail to see this huge, magnificent bird sitting on her nest. We were still a distance away from her, and no camera could catch her, but Theo loved this.  “Poppou, could we go closer?” He asked.

After we had crouched there, eyeing the eagle, for some time, Theo said:  “Poppou, I’m feeling kind of tired.”

“Really?” I said, cheering within.  “Would you like to head to the tent and lie down?”

So we made our way there. Once we arrived, he wanted a couple stories. I read those and then we received a video sent by his mommou (Gramma Karen) from Mexico.  We watched her video, and he kept trying to respond to her as she spoke to him, as if he were seeing her on FaceTime.  So, I asked if he would like to send her a video in return.  He wanted to, but once I started the video, exhausted, he stopped talking!  You’ll hear me prompting him.  But one thing this video does capture is his tired eyes and voice.

Look at those half-closed eyes!

He watched himself on video time and again.  I realized that with that form of entertainment he would never sleep.  So, I suggested he just put his head on his pillow for just 10 minutes.  He responded with a question:  “And then I watch the video?”

“Yes, then you can watch more video.”

With that, he put his head down, and fell sound asleep in 2 minutes and was out for 2.5 hours.  Yes!

This slow morning was such a gift.  It was wonderful to walk at that 2-year-old pace. It was great to see the world through his eyes.  While he slept I journaled, prayed, and sat quietly.  It was quite simply blissful.

Days can get too full, and become too heady.  Yet with Theo life was reduced to a simple stroll.

It was life at the heart level.

I know well that every moment with a two-year-old is not at such a pace.  But, that day it was, and it caused me to wonder how often I allow my life to slow down like that.  When do I really slow down in a focused way so that my life is reduced to a stroll as if holding his little hand and walking at his pace?  I even type “fast.”

Again and again in my own listening to God over the past months, the message has been for me to simply learn what it means to be, to abide, to slow down.

For that matter, when do you stop, put down the electronics, shut off the TV and radio, and see what is around you, experience life at a breath’s pace?  When have you stopped to observe some creature in nature and have been a child at heart wondering if you can hold it? 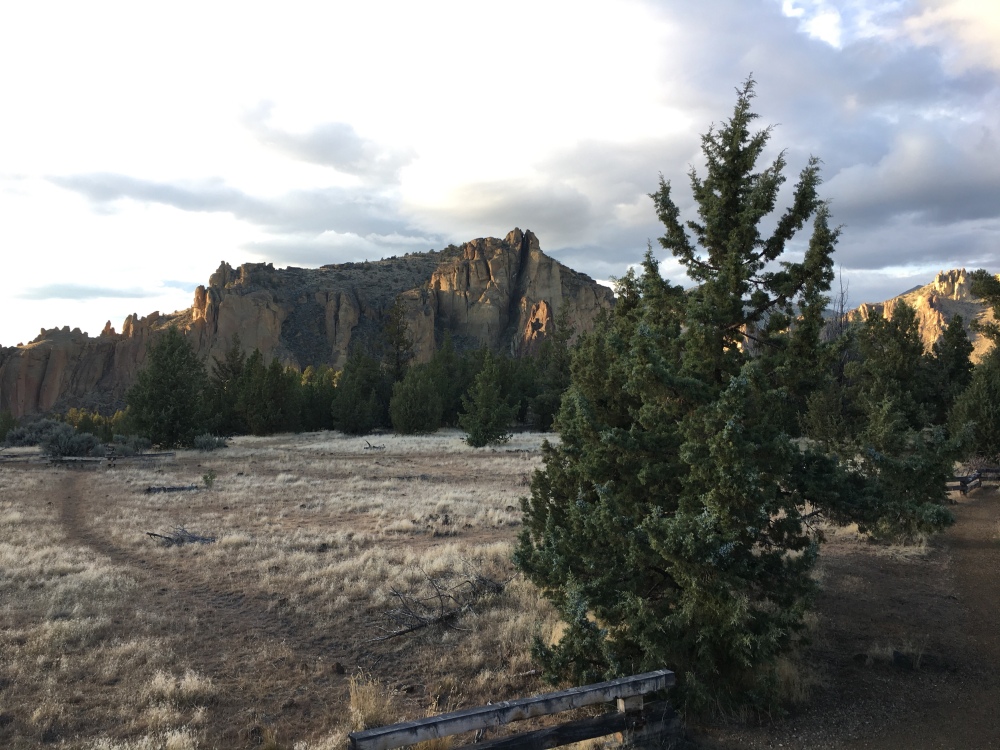