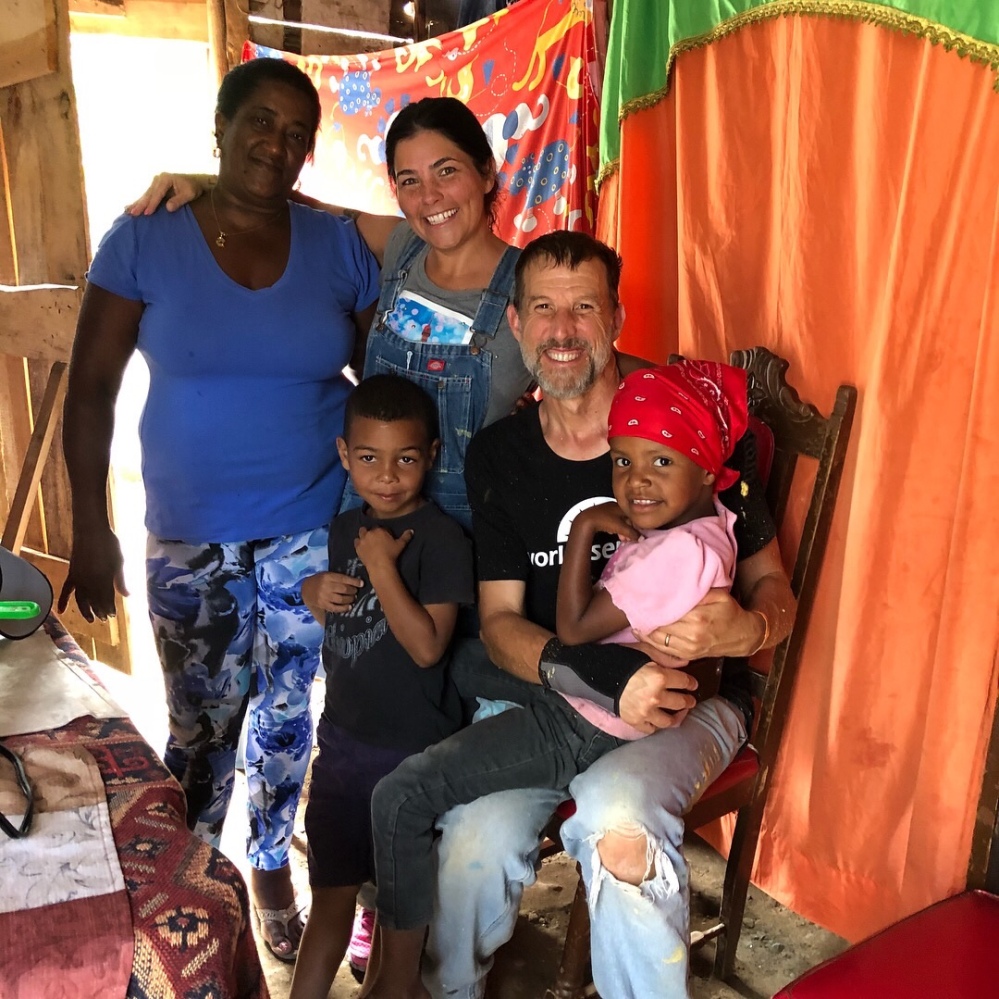 It was a vision that took Tim Gibson away from World Servants, an organization he had founded and led for a decade, to start another organization.  After traveling to some 46 countries on missions trips, Tim wanted to find out what it would be like to focus on a couple communities and invest over the long haul and see what God might do.  He founded a new organization, Building Legacies, and for eight years had worked in the tiny community of Rio Grande, in the Dominican Republic to go deep to bring change.

The focus was the building of a school for the kids who lived there, who literally would have to hike up and over a mountain to reach a school otherwise. A trip too difficult to take most of the year.  Without an education, kids grow up without hope.  But Tim’s vision goes far beyond a school.  He knows that lasting impact comes with relationships, so his desire was to forge deep relationships with the people there.  Every year a team has come with him, they have taken breaks twice a day to play with the children of the community.  These kids are impacted, for Tim says, “Relationships bring hope.”

Last year Josh and Wendy Fedderly and their oldest son Sawyer formed a three-person missions team and joined Tim in Rio.  Small but mighty, the three of them worked alongside local workers and painted an entire building in the week they were there.  They played with the kids on breaks daily, and the kids loved them and remembered them.

This past July Josh and Wendy, their two sons, both their moms, were joined by a single mom and her 16-year-old son, along with me and another woman from our church to form a team of 10 to return with Tim Gibson to Rio Grande.  It was an incredible journey. 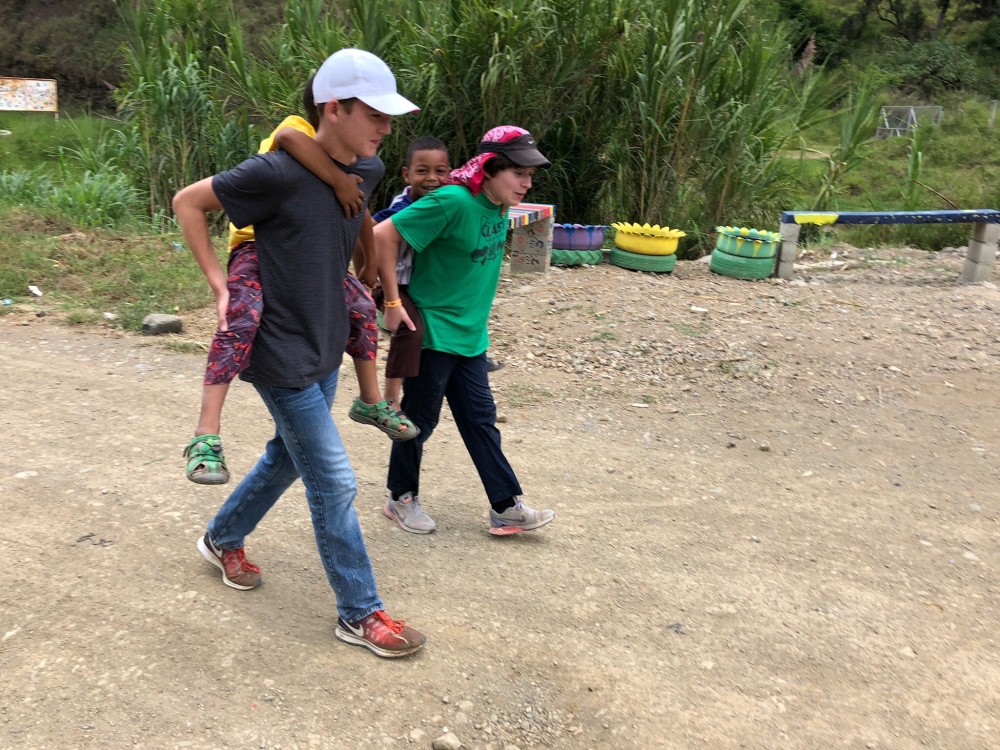 First, just for basic relationship growth for all of us.  Some of us had not spent much time together, at all, even the two mothers, and so there was lots of getting acquainted opportunities for us.  But also, it was incredible because of what we witnessed and experienced. 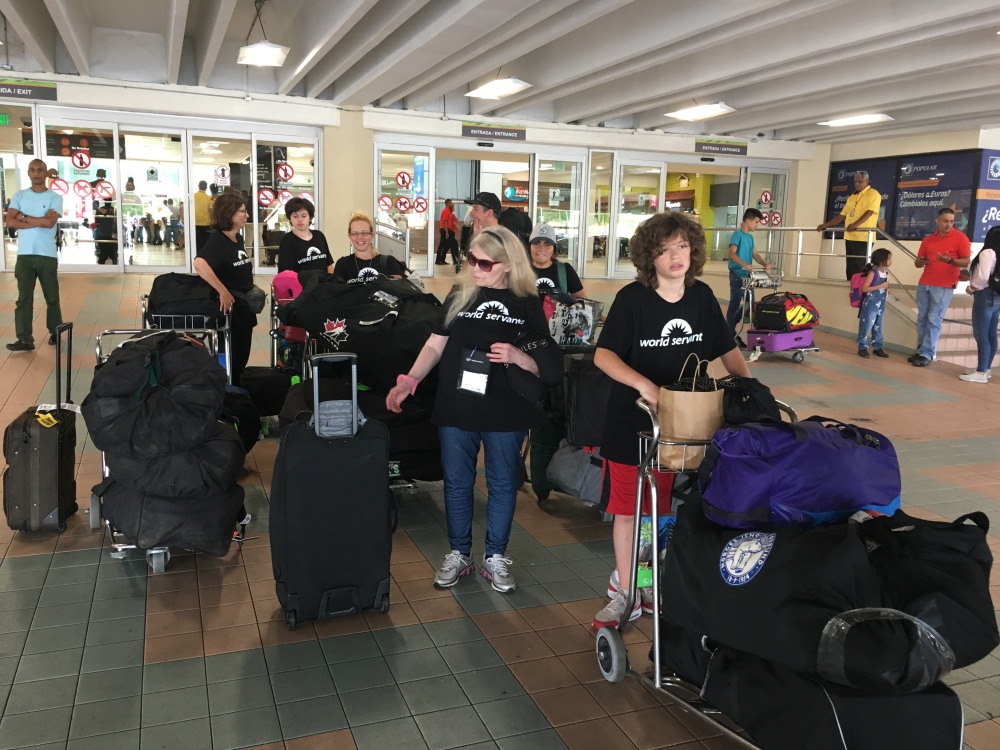 Wendy’s goal was to have us bring in 1000# of supplies in our two-checked bags each and we achieved this!  Delta Air Lines considered this luggage all part of humanitarian aid so didn’t charge for them.  In those bags were tons of sports equipment, mostly baseball, the nationally favored sport.  Kids play baseball with sticks and rocks all the time.  Seeing what we brought was a great joy to them.  We also brought medicines for their health center.

Arriving at the Santo Domingo airport with all these bags, our carry-ons, and us, we didn’t know how it was all going to fit onto the bus they had brought.  We helped hoist the bags through the back window of the bus, and stacked in the rear seats, and in the end, we all fit.

Tim is a great missions team leader, with decades of experience, giving us a couple hours of cross-cultural training with some great, interactive exercises.  These helped us to be more aware that we were there to love. “No cameras, no pictures on the first day.” He reminded us, “Don’t make people into an object seen through a lens.”  Pausing to play was essential, even if we didn’t complete the locally supported project.

The first afternoon on the project as we started scraping the cement walls to prepare to paint them, the kids arrived to play at 3:30 pm.  One little girl entered the school compound area, and seeing Wendy in our team, whom she had met the previous year, the girl shouted Wendy’s name and ran across the yard greeting her with a huge hug. 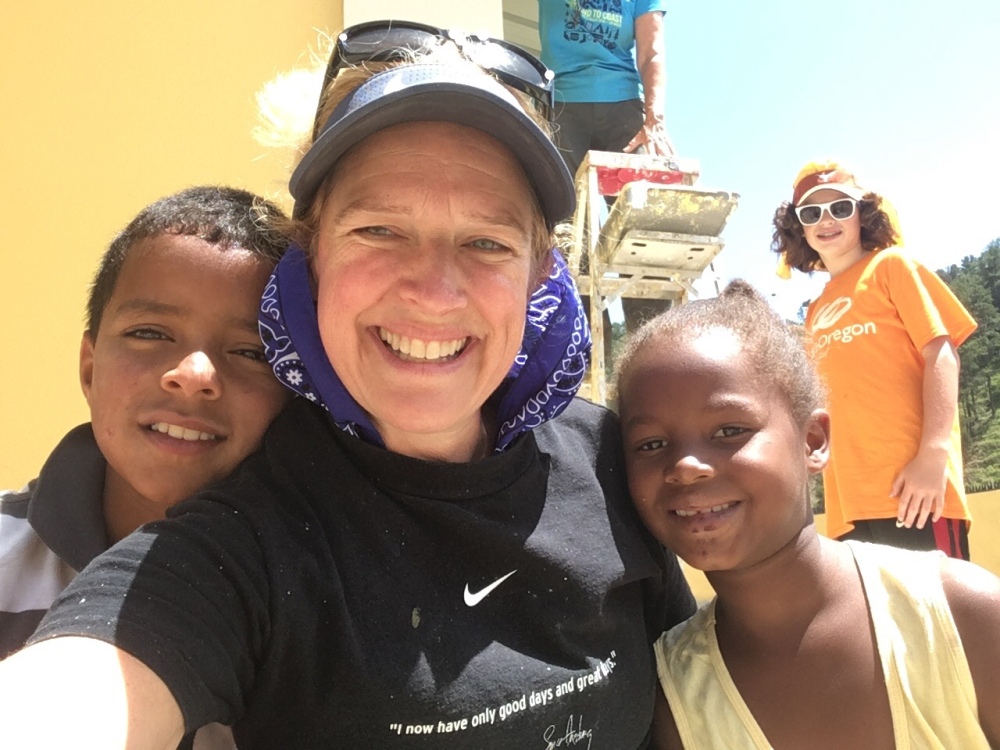 Then I saw it, it was not the project we did that made the largest difference, but the relationships built with these kids and the adults in the community that made a difference.  Into those relationships, we brought Jesus, as we were willing to give of ourselves to them.

Daily after this, we worked a nine-hour day, at the site, with breaks at 10:30 am and 3:30 pm to play, and then a lunch break in the middle as well.  One day we went out to home visits.  These people had so much joy but so little of any material possessions.  Their simple, sometimes 12-foot square homes, with one sleeping room, and another area for the kitchen, dining area, and living room, and sometimes a motorcycle parked all within that small place.  The flooring was dirt or sometimes cement.

When visiting the people, we laughed, told stories, listened to their stories, and experienced such a connection. 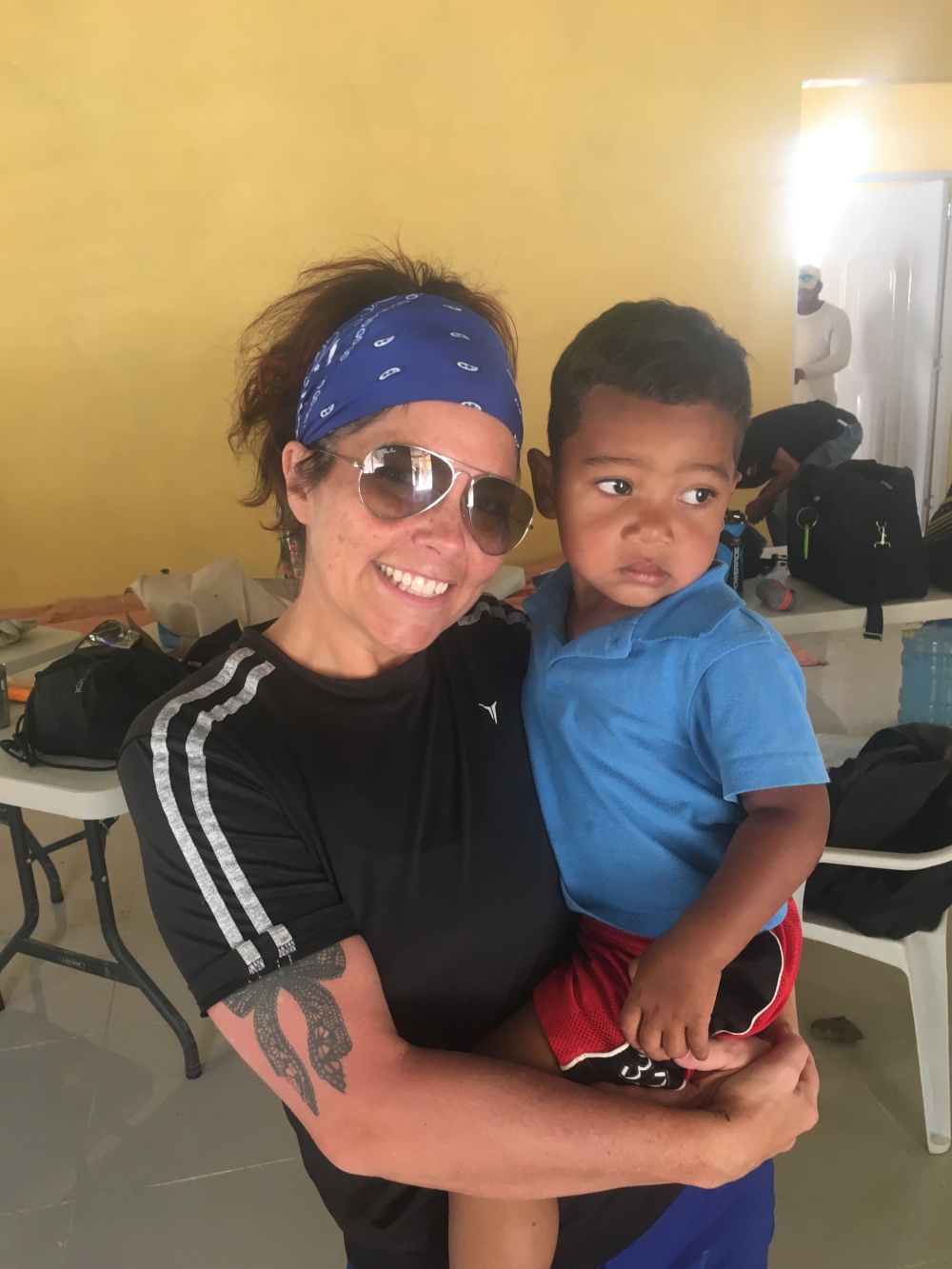 Once when we were walking along the main street, a woman handed her one-year-old child to Stephanie, a group member, and she carried him along with us down the road and then back again.  He fell in love with his new Auntie.  When on my home visit, one little girl from the community latched onto me, and stayed with me the couple hours while we visited in two homes, and shared with the people.

We had two projects — part of our team worked mixing concrete, taking cement, rock, dirt, water, mixing it with shovels on the ground and in wheelbarrows and transporting it by hand, and pouring it to create the new basketball court. 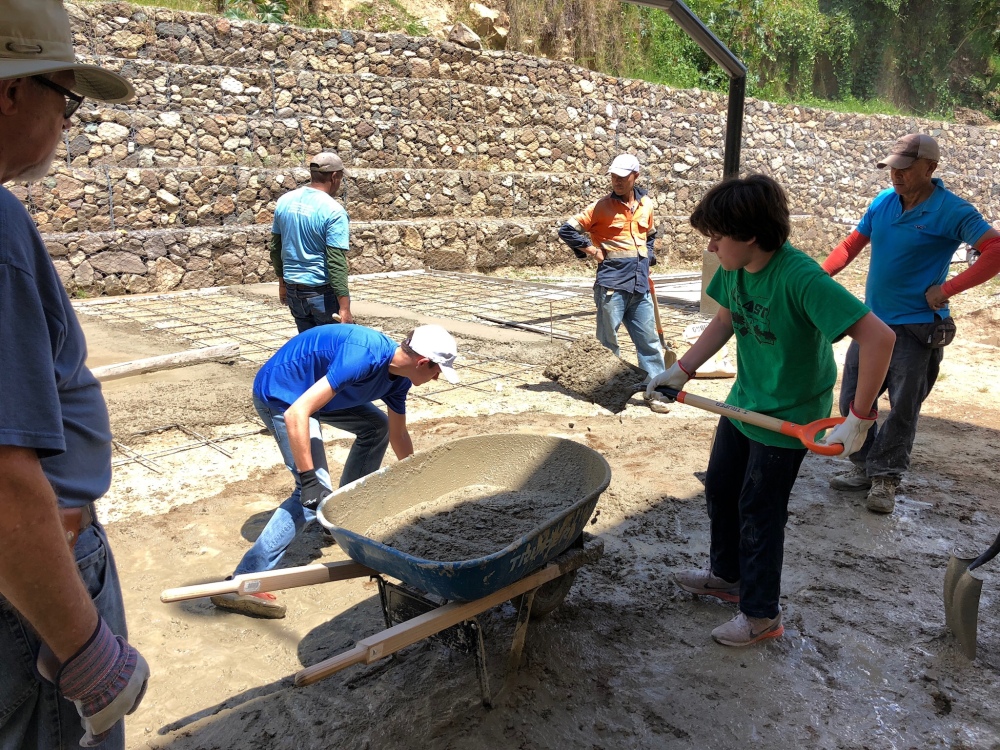 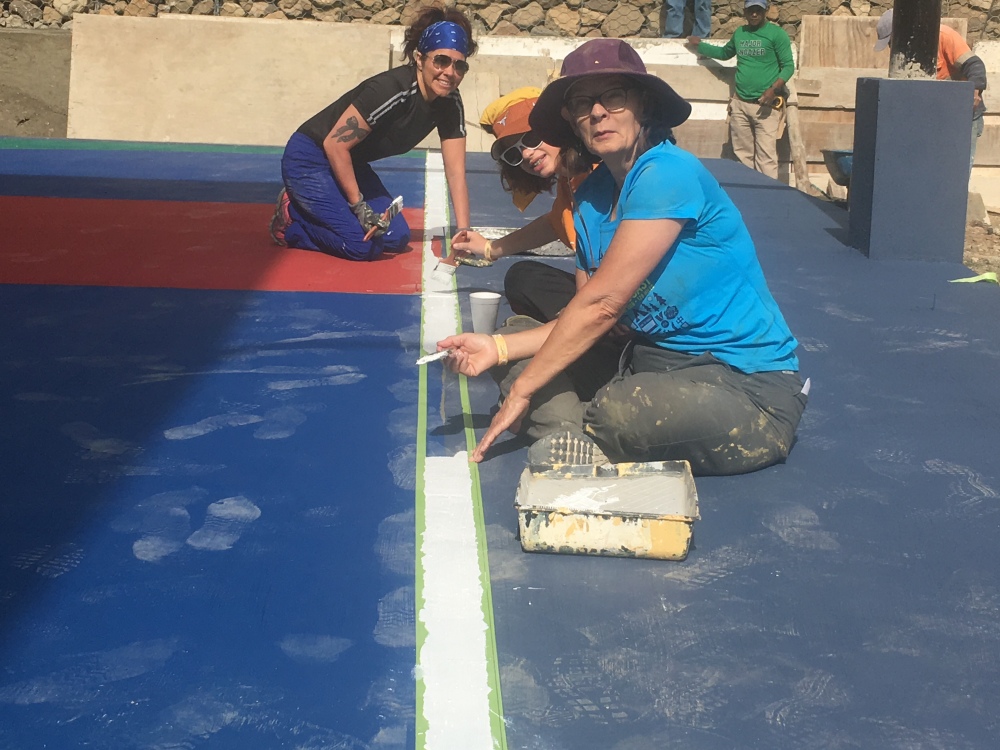 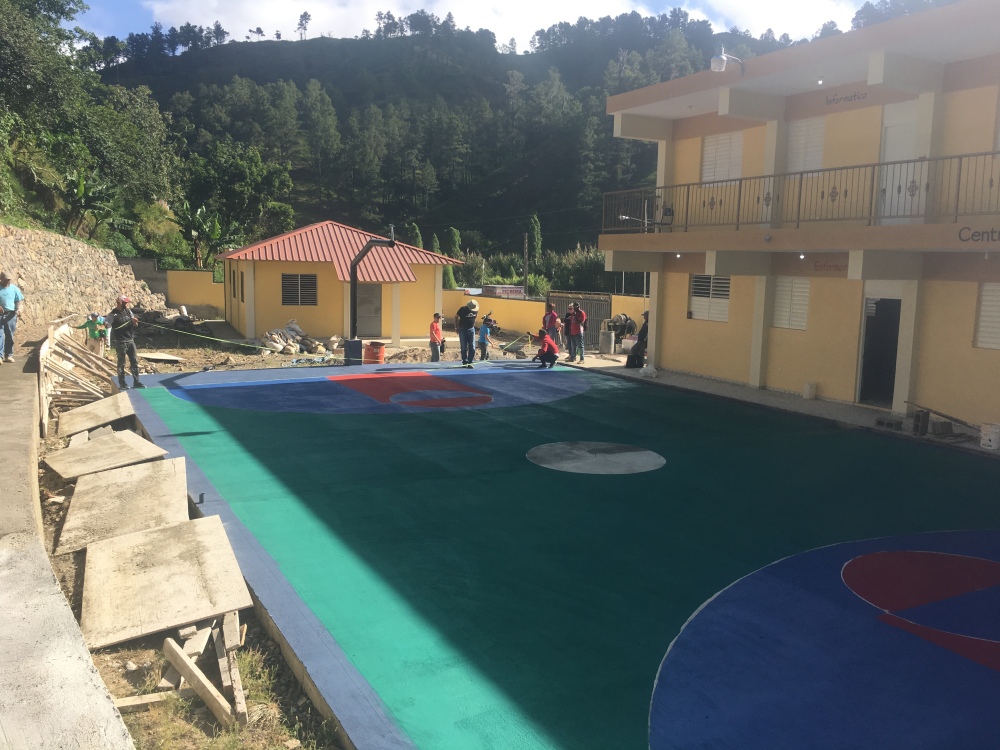 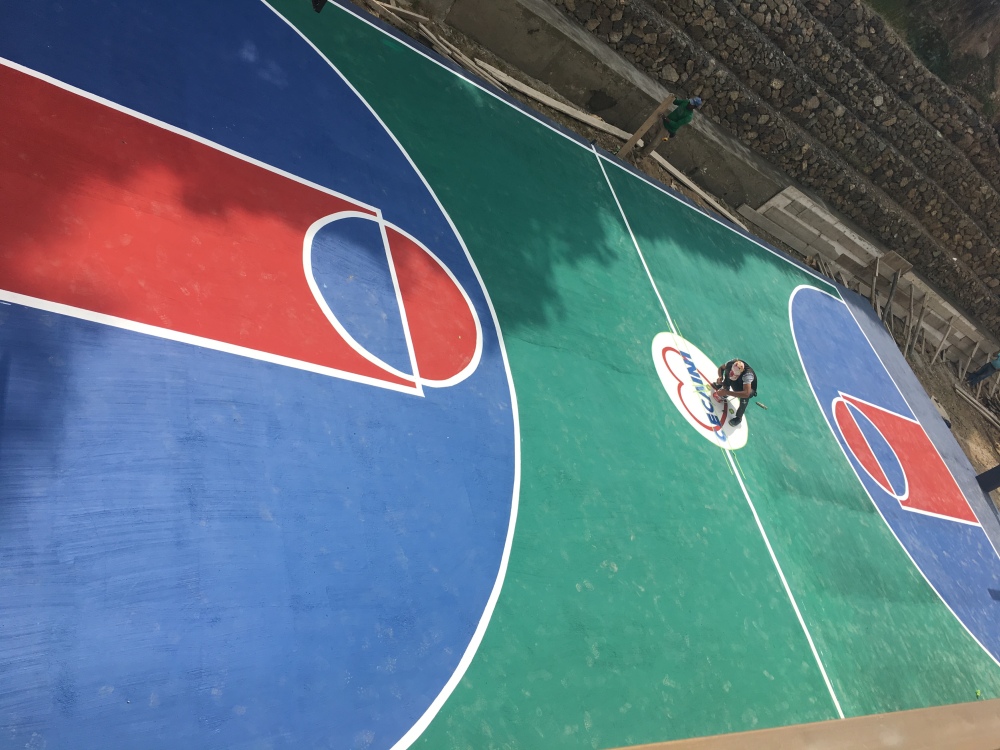 This was quite a project!  The rest of us painted the new cafeteria building inside and outside with two coats of paint. 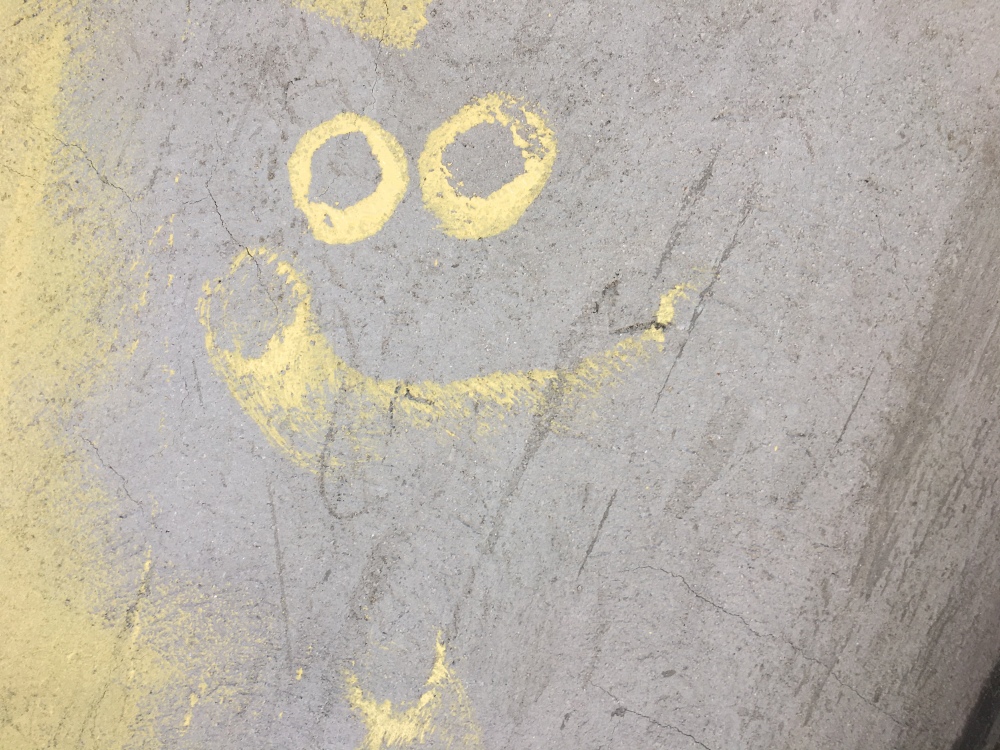 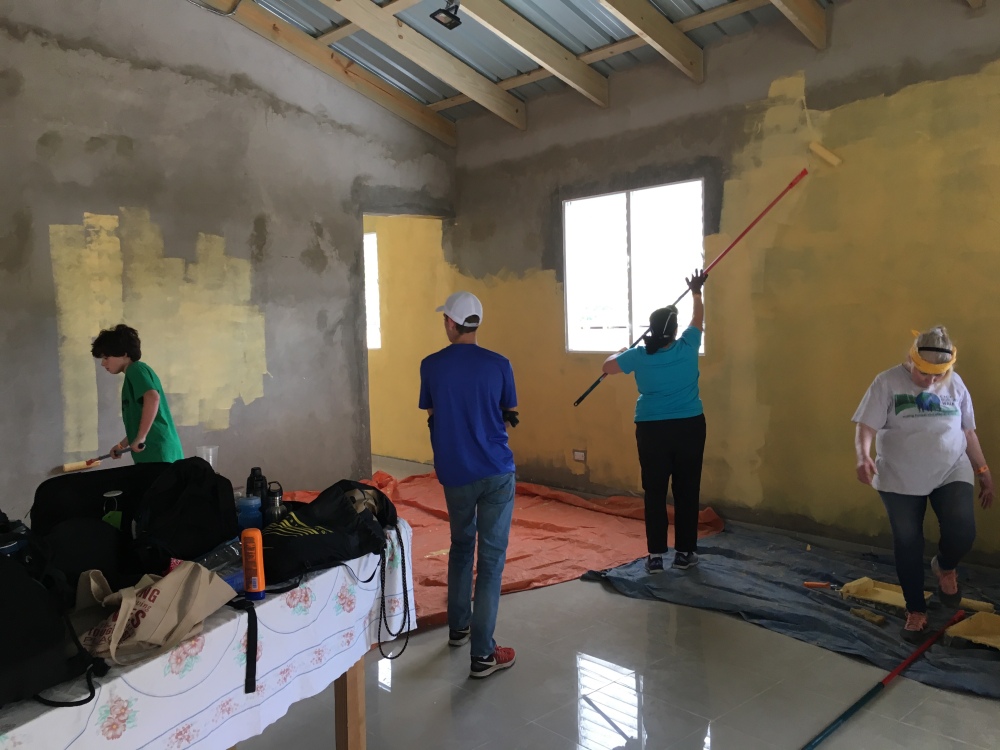 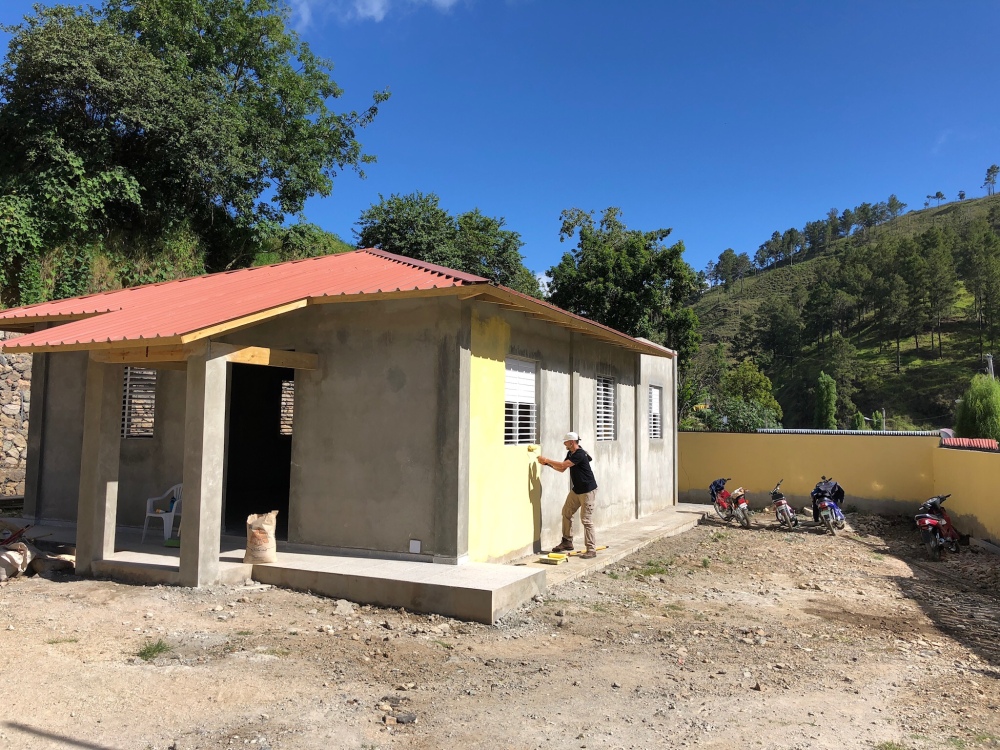 Some days because there was no space to play with the concrete work going on, when the kids came in the morning they just had to sit at the door to the compound. On these days, I went to the children and told Bible stories, and asked them questions, talked with them and one time prayed with them.

was marvelous at helping us bridge the language barrier.  But we found laughter and play was a universal language for us as well.

One little boy I was playing ball with one day wanted to learn English so I practiced my Spanish and he practiced his English with me.  As we conversed, he said, “I am nine years old,” to me in really slow, broken English, and I responded in my equally slow Spanish, “Yo tengo 59 años.”  At this revelation, his mouth dropped open at that impossibly high number and then we laughed and laughed and laughed. How could I possibly be 50 years older than he was?

The games were always high energy with running, sometimes an entire baseball diamond set up and a game played with plastic wiffle bat and ball, and pieces of trash for the bases.

The kids were creative in a very small area. Frisbees would be flying overhead, balls whizzing past, and larger balls bounced around the yard.  It was something to behold.

The mayor of the town, Mercedes, ran one of the local markets.  There were three of these on the main street, none of them competing for business for each of them only offered certain items.  We visited Mercedes’ store one afternoon, and her lights in the 6×3 foot area were off, but she was open. No reason to waste electricity. Behind her counter sat a 60-egg flat with some eggs in it, which she sold one at a time, the one shelf above her held perhaps 10 8-oz cans of tomato sauce.  There was a refrigerator with some items and a few kinds of candies.  That was it.

We had deep, incredible conversations with one another as we worked.  Shared tears, long stories, prayer times, and then played hard during our off times.  We experienced worship at the local church on Sunday evening and I had the privilege of preaching.

It was this packed week during which we finished both projects and even added to a third that they wanted to complete.  The week felt much longer than a week to us living through it.

As we left behind the children and the community, it was with a sense that we had left part of our hearts with them as well.  After our return home, I stopped by Costco to pick up some groceries and was staggered by what I saw.  I’ve traveled much in the 2/3rds world, so have experienced culture shock before.  But this time, as I walked in, it felt more personal.  Mercedes’ store flashed before my eyes.  Her tiny place with just a few items and here I had walked into this mega-warehouse.  Tears brimmed my eyes and I nearly walked out.  I walked in and thought, “There’s a real person whose name I know, whose store I’ve visited, who lives with so little. She will not see this much stuff within her lifetime.”

That was the rub.  Our small 1530 square foot home is gigantic by comparison to what these families live with.  And our pantry holds more than their stores.  I think often I live without remembering this reality.  Since my return from the Dominican Republic, I’ve sought to keep this more firmly in mind and heart.  I have so much as a gift. It’s a simple truth but shifts my perspective.