In my prayer journal, August 3, 1982, less than one year after our walk began as a married couple (August 22nd the previous year),

Karen was hitting the pain of some of the many points of injury she had experienced as a child.  She was in counseling.  It was tough from the start for us as a couple.

If you have read my blog, you know that I too come from a background of sexual abuse (see #metoo).

At that point, I had not remembered what had occurred in my early life but only knew that I could remember very little of my childhood, so that season of devastation was buried.  When pain is buried it resurrects in all kinds of ways we don’t expect.  That pain showed up in me as anger, hurt, manipulation, jealousy, pride, selfishness, hubris, etc., but was often covered by a veneer of happiness and laughter.  I am also wired so that I would rather enter into someone else’s problems, rather than be aware of or work on my own.

I’d rather believe I have the answer for you and tell you about that, than recognize what I am feeling, experiencing myself.

That day, August 3rd, I wrote this:

“Jesus, please help me to understand and support Karen in what she is going through.  Give me the discernment, wisdom to speak that which You would have her hear. Please, teach me to love her, all the more and support her through this struggle.  Thank you for this lesson on how to love — a love which is not based on my selfish wants but upon her needs.  Love based on a willing self-giving rather than on taking.   You are my master and Lord and only you can help me to love and learn to love all the more in this difficult time.  Jesus, thank you for your presence in my life and I pray that you may help me.”

Not bad for being just a kid.

I was seeking exactly what I needed to have — wisdom in the walk. It takes learning to live from a place of real love in relationships.  A week later, August 10th, I wrote this:

“I pray that you may weave a bond between Karen and me, and help her to overcome the feelings of not loving me. Jesus, be her prompter in love and be her support.  I pray that you could guide us to find some outside help to aid her in working through her difficulties.  What are we to do and how?  Jesus, forgive me for being so insensitive at times. Help me to love her more completely. Thank you.  Teach me to love her and others as you loved.”

As I read this — written 36 years ago — I am struck that I did not think that any of our difficulties could be some growing I too needed to do.  Did you see my language, “working through her difficulties.”  That’s a tendency I have had — I believed that somehow those around me have their “issues” and I, in a relationship with them, was somehow not a part of those issues.

I am also struck that it didn’t cause me to pause or feel fear that she did not feel like she loved me then, less than one year into our marriage.  That’s such a picture of my own outward focus.  I’m certain that to have heard her say she didn’t feel like she loved me, hurt or possibly frightened me.  But at that point, I am equally certain I did not know I was feeling that hurt, for I was too cut off from my own heart to recognize it.

My written prayers in that journal were honest, but really not touching the core of my own heart. Yet, thankfully, I pursued God, asked of God, sought the face of God.  The cool thing about God is that I didn’t need to have my own stuff all “in order” in order for God to hear those prayers and answer.

Indeed, God was at work in us and on us through one another from those first days.

If you flash forward two years, from then, to December of 1984, and had come to our apartment at #1 Alumni Manor in Wilmore, KY, you might have caught us at odds.  Then, we were expecting our first child.  I was a seminary student. Karen was working in a temp agency to help support us, and I was working in a travel agency, going to school, and struggling with my self-worth and identity.  My pattern of manipulation, then, was to get her to help me out of my emotional pity parties by crashing into her so that she would rescue me.  I must have been exhausting.

One night stands out in stark relief.  That night we knew we were done. We could not make this marriage thing work. We had no hope. We felt like the inside of our marriage was a dark as the dark, overcast, freezing weather outside.  We came to the conclusion that divorce was the only answer, and as we realized this, we decided to take a walk.  I remember that walk.  We left the house, wrapped in our wool coats, hats, gloves, and scarves and with linked arms, walked into the night, weeping.  We were so sad that this was it, that we couldn’t make this marriage work, that we had failed.  I don’t claim to know how this happened, or who got prompted to pray, but I know that hopeless walk through the slush and ice accomplished something unexpected.  When we left we were hopeless and by the time we returned back to the house, we had found hope.  A small hope had come to light in our hearts for us and the future. And that hope had a foundation: commitment.  We had committed ourselves to one another before God and we realized that perhaps love was more than a feeling and we had to make commitment matter. So, with that glimmer of hope and standing upon the rock of commitment and covenant, we walked forward.

Thankfully.  We walked forward and continued to work diligently at two things – our personal recovery work and our communication skills.

Two years later, in early December 1986, Karen had not been feeling well and had gone to the doctor while I studied for my final exams and worked on my papers for school.  I had said, “Whatever he says, feel free to get pills for you to feel better.”

She returned home a couple hours later and said, “Well, the doctor says it is not life-threatening, but it is kind of longterm.”

I got mad as if I had not helped create “this dilemma,” who is no dilemma but a treasured, wonderful woman.  All I could see that day was the work, the papers, the tests, and all my thoughts were about me.  I slammed my office door and said I had to get back to work.  “A BABY???”  Karen was excited and my reaction did not dampen her mood.  I did not stay holed up long, but came out, apologized for my reaction, and we began to anticipate the arrival of daughter number two.

My last year of seminary I took a class alongside a student pastorate at a church 150 miles away from Wilmore, for which I wrote verbatims and we had a small group looking at aspects of ministry and the experiences we were having. It was in that feet-on-the-ground, preaching-week-after-week experience, that some of the depth of my own brokenness began to show.  My professor wrote it in red ink on the last page of my final project, “You are at war with preaching. If you don’t deal with this, you’ll be out of the ministry before you turn 40.”

With that bitter prophecy and our two children we left Wilmore and traveled to Southern California where I took the pastorate of a congregation there.  Two more daughters arrived, we were loved by that church community, and I struggled and struggled against the shame I felt within, shame about not being enough, not measuring up, shame that I was a failure.

I was at war with preaching, truly, for I was at war with myself.  The list of inadequacies I felt was immense.  Each was linked to the brokenness I carried within me. And there, in that place, I began to slowly get in touch with anger.  A deep anger that I didn’t know how to even face, for how could I even admit to being angry?  Somehow anger was not a good emotion to have so it took me some time to even admit that I had it.

Every once in a while I would snap and say things I wished I had not said. I’d be pompous, arrogant, all-knowing. I awoke to the fact that I had been abused in this season, but not to the actual memories. That fact, however, assisted me in knowing that I had work to do.

I was turned down for ordination and given more work to do in June 1992 and I called Karen from a pay phone to tell her.  I was angry at the committee, felt they had been unfair, and told her so. She said, “Perhaps since your response is this angry, they made the right decision.”  One thing about Karen — she’s always been wise!

With that comment, I felt as if my face had been splashed with a bucket of water.  I was shaken into awareness of just what I had said.  That ricocheted me into counseling, which began some of the important recovery work that got me in touch with the real me.  That work continues.

and liked each other.  We could play, laugh, tell silly stories, talk with crazy accents, laugh at the most inane comments, make up stories and in all this we had joy. 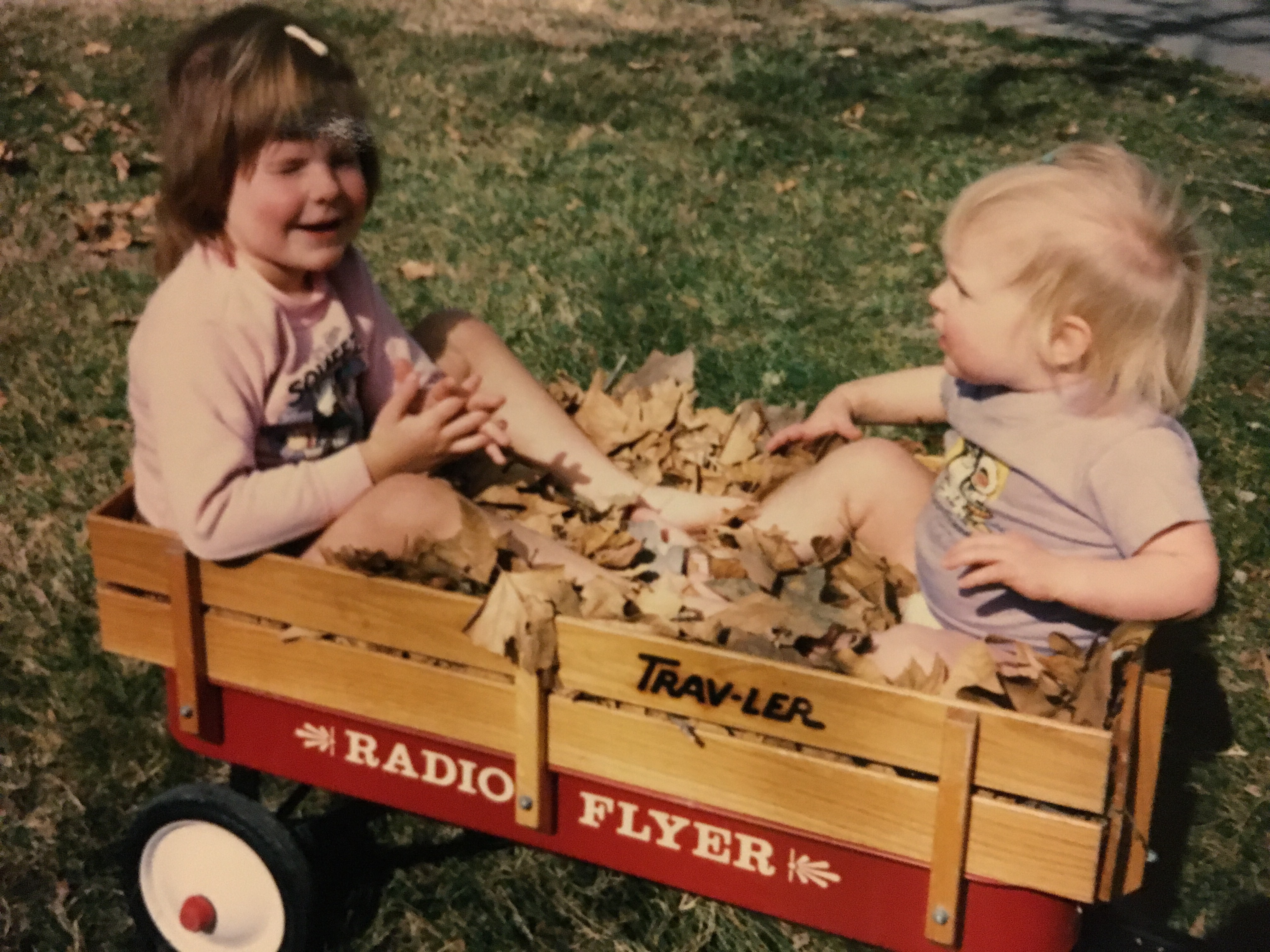 Jesus gave us this grace.  Through my awakening emotions and Karen’s work as well, we had this sustaining joy.

Four daughters kept us busy raising children, and then they began to have children, and we became grandparents, and alongside that, Karen and I have continued to believe that the most important work we do is this continual work to learn what it means to love well, to listen long, to be companions along the road, and walk together.  It takes courage this walk. But it has been worth every step.  We are in our 37th year of marriage, and today, we love each other more than in the years past.  Love grows when you work at it as you journey.