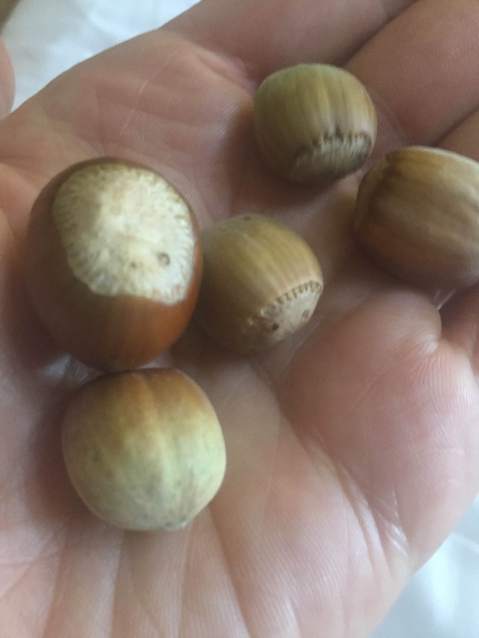 It was Santillana Del Mar — the place I stayed two nights, a planned rest, thinking I could enjoy the beach– only I discovered when I got there that it is not located on the “mar” at all. No “sea” at all. Indeed this town is inland. It is a medieval village located in a valley.  Miles from the beach. 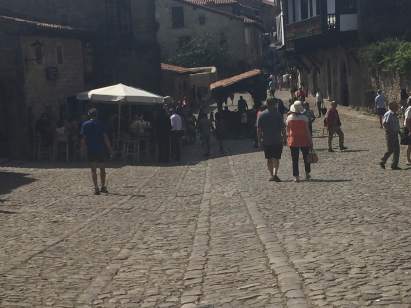 It turned out to be a great place to just be, however, even without a beach!!

So I’d booked this hotel that was listed as in that town. I was a bit nervous about this. I once was a travel agent, but have lost my touch.

The first room I had booked for my arrival in Spain, August 20th, was supposed to be near the “bus station in Bilbao.” But apparently the search engine I had used had broadened out to hotels “near bus stations” all over Spain. And the great one I had chosen for its distance from the station had not been in Bilbao, at all. No, I had discovered from the taxi driver outside the Bilbao airport, it was in a city nine hours away by car!!😜

So, as we arrived in Santillana Del Mar, my friends from Italy did a search and the place I had was outside of town, but only by one km. That was doable.  Phew.

On my first walk to town, from my hotel, I was lost. (I specialize in getting lost, even though it was not that difficult a way to find.) Without my Camino, yellow arrows, I’m a mess.

I held my map.  As I walked by this gentleman, debating on whether to ask for his assistance, he turned, saw me, and asked me to stop.

“Aqui!” He said. And reached his wrinkled, beautiful hand toward mine.  He released five filberts in their shells into my hand. And then, he taught me how to shell them. Although I knew this, the gesture earned my heart. I was blessed that he reached out. I pointed at the map and asked, pointing to a point on it, if that was where we were then standing.

He turned from me, got his ancient, used-to-be-blue bicycle from against the centuries-old, rock wall of his house, and says “vamos.”  So we walked together. I introduced myself and learned his name was Leno.  With his farmer hands, face lined with age, skin leathered by the sun, and eyes that danced with light, he became my way.  My yellow arrow, in person.

He walked me down the hill passed the restaurant named after a king, to the parking lot on my map and the famarcia (Pharmacy) one of my targets.  He pointed to the map.  And I knew where I was.

I had learned in our “conversation” of his two children, a son and daughter, and that he’s a grandpa.  And he learned I have four daughters.

The filberts in my hand, which I have kept in my stuff ever since, remind me of Leno and more fully of the most basic repeated lesson in this school of life: the Camino provides.

Multiple times now, this has happened. Someone has reached out to me or to me and others and gotten us on right path.

Grace and I, one early morning realized we had not seen an arrow in some time and as we stood in the dark, near the highway, a black pickup pulled up, a man, smoking a cigarette, with a great smile, got out and approached us.

He said in Spanish – “on the Camino?”  Yes we were. He said we were not on the right track, however, the road he had just driven will connect us back to the Camino if we just follow it. So rather than backtracking, we walked this country lane, through dew-covered fields, early dawn fields and alongside pastures and darkened homes hearing the crows of roosters. Another time, this time in a large city, a man again came to us, noticing our lost expressions, no doubt, and offered his assistance. Again– The Camino provides.

Elaine, 76, from Germany had walked the Camino Frances in 2012 and didn’t need a fancy backpack for her stuff, nothing to help bear the weight, so had purchased “any old pack,” which it turned out was made for a man. She had hiked with a small pack and had that bag shipped from place to place. 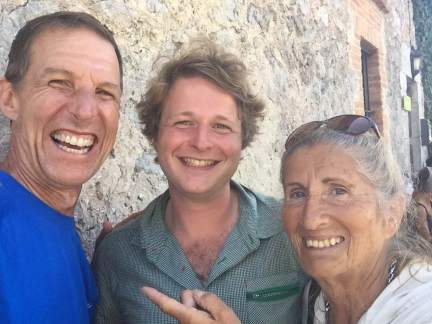 Returning to walk the Del Norte this year she hadn’t thought she would need to do anything differently but had discovered first day, that there existed no means to ship her things albergue to albergue, so she had to carry the pack.  But that was impossible for her, without adjustments.

The third day in she was fading. Sharing with mates at the albergue, another woman, from Spain, said: “Elaine, take my bag and I will use yours. I just bought this, this year, it is made for a woman’s body, adjusts the weight, and is easier to carry.  I’ll take yours.”  When Elaine objected, (who does this?) the woman said how it made sense for she was only planning to walk 10 days while Elaine planned to go all the way to Santiago. Thus saying, Elaine was able to continue on the Camino, with a new, wonderful backpack.  The Camino provides.

Nannette, “the boys”– our affectionate name for two young friends from Italy, Lorenzo, Claudio– and I were walking one especially long day and missed a short cut.  Previously we had stopped in numerous shops on the mission of finding a lighter for them  to sterilize a needle to treat Lorenzo and Claudio’s blisters. We had not found one. Because we’d missed the short cut, we found ourself on this long, terrible walk along this huge factory. No sights. No beauty. Just step, step, step, step. 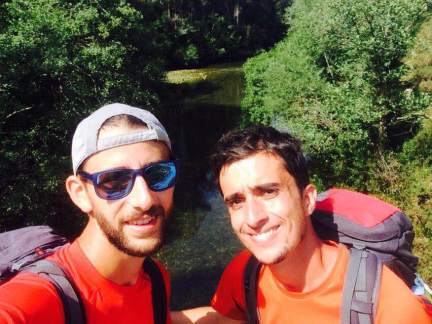 However–  there on that path, the “long cut,” was a Bic lighter. Nannette saw it and picked it up. Full of fuel. It worked great. Another lesson, the Camino provides.

Already I have told of how because I had stayed two days at the monastery, how a osteopathic doctor had come and done an acupuncture treatment on my leg that was giving me such trouble.  At another albergue, a massage therapist offered his services, again ministering to my leg. The Camino provides.

So much of this journey has been the repeated lesson, that nothing depends upon me. That when “I got nothing,” which is most of the time, that the Camino, the mysterious journey with God, provides all we need, the people, the gifts, the hope.

I waited a whole day in the tiny town of Unquera to meet my daughter Grace, who had flown over to meet me and walk with me ten days, on the Camino.
Here I was in this town for 8 hours. I visited the shops.  I drank tea one place, had a beer and tapas in another, bought groceries for our food up the hill, later, and chilled for a day.  It was a warm, beautiful day.  You’ve never seen such a glad guy as when Grace got off that bus. 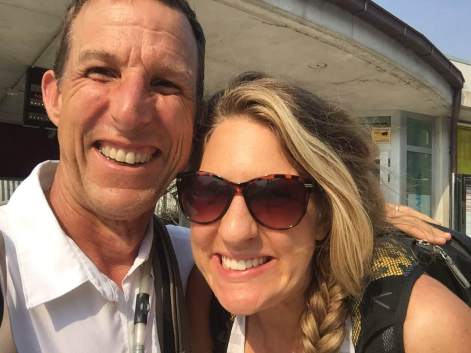 As we began our trek out of Unquera, up the mountain to Colombres, and beyond that, to our destination that night, I realized again how “the Camino provides.”

Grace brought with her, her sensitivity to nature, her love of animals, her appreciation of the songs the birds sing, her love of adventure, her love for me, her constant laughter and added to this journey a beauty I had been missing.  Although it had been my intention to stay aware, alive, awake daily, using all my senses, truly after 17 days of walking, I’d lost some.  But now, through her, I again could slow down, see, hear, touch, feel and taste in a real sense, the Camino. 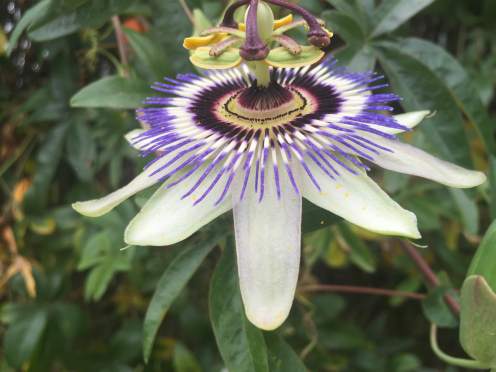 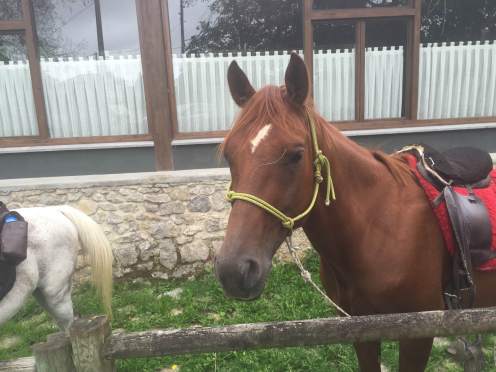 When I’ve got nothing, the Camino provides. 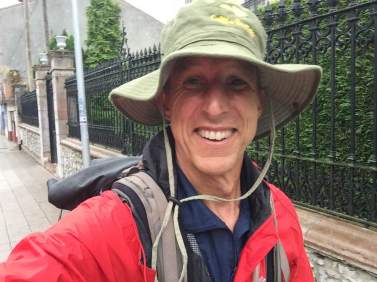 As I walk the “way” I realize again and again the truth of this.  Indeed, I don’t have to have anything to offer, the idea is not to have my hands full, but empty; not to have my mind full, but still; not to have my feelings stuffed, but expressed.  I’m learning, ever so slowly, to notice, to listen, to smell, to hear, to taste, to receive the gifts of the Camino.  In the strangest, most phenomenal way, the message continues to be, “Let Me Provide. Just receive.” 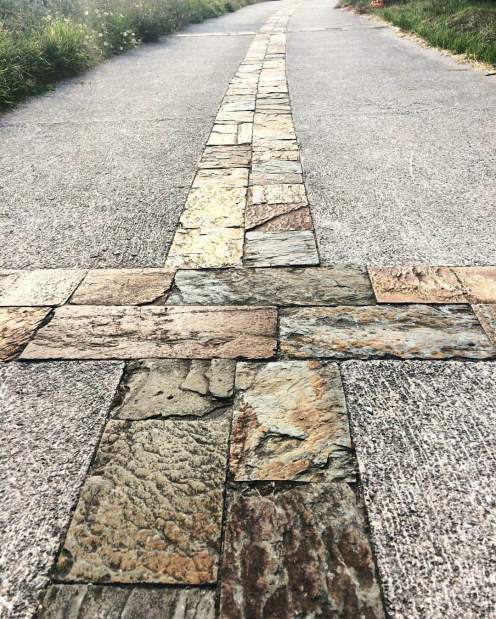