We were quietly sitting in worship.  I had directed people to listen and write what they heard God speaking to their hearts in that moment of quiet. 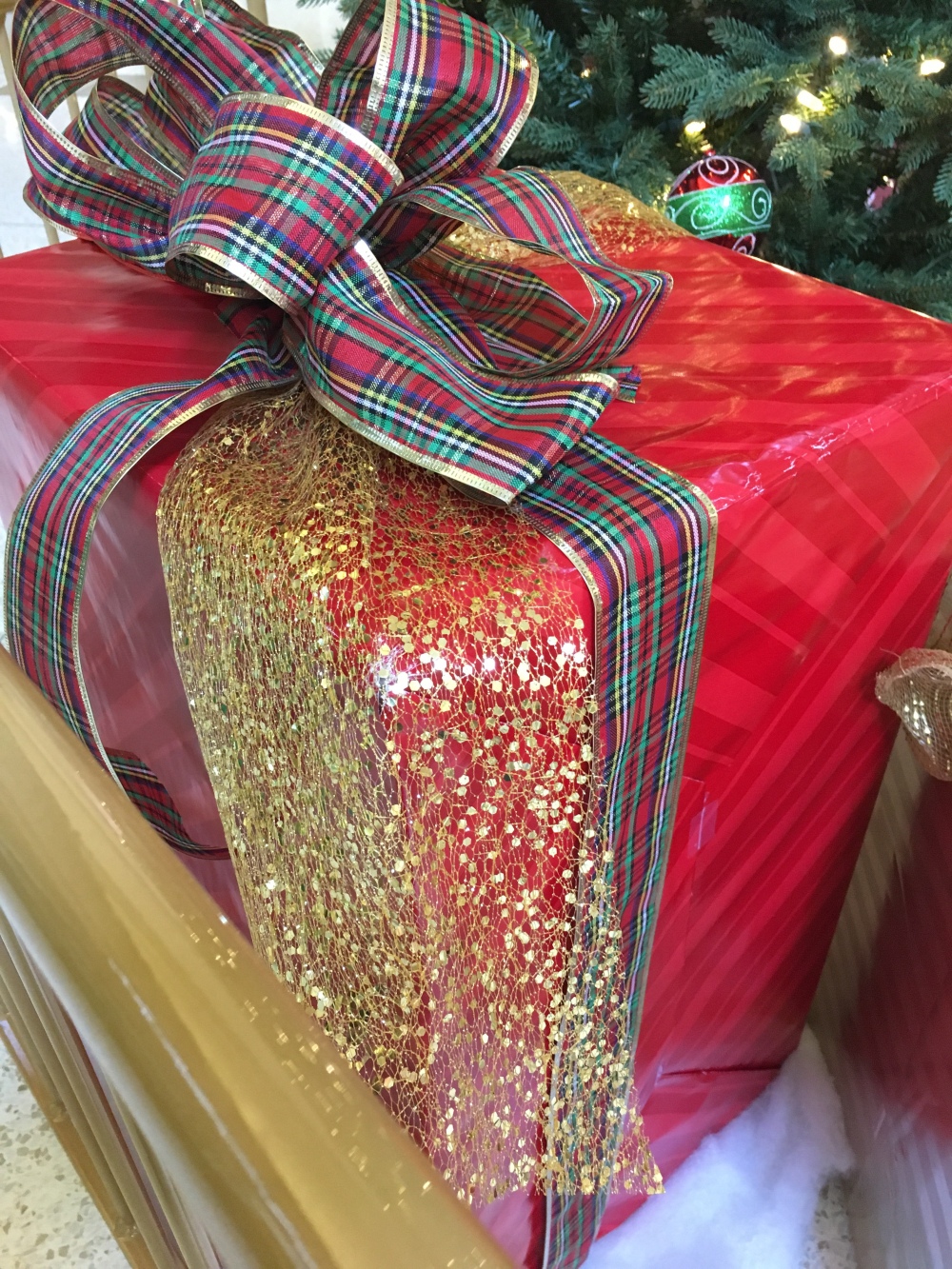 Dressed in a bright red vest, with her red piece of paper before her, this woman was ready to write what she heard God speaking.  Instead of writing, tears sprang to her eyes, and as she reached for a tissue, she looked up at me. Her face told me, whatever had happened, had shocked her.

“Do you want to share?” I asked of her, as a part of that time of worship.

She opened up, saying:

“Well, I was just expecting perhaps a time of silence, or perhaps a word or two.  Instead, as soon as I had written, “Lord, what would you speak to me?” all around me I sensed my mom’s presence.  It was like she was here.”  This stopped her.

Her mom had been especially close to her and had died many years ago.

She paused, catching her breath, steadying her heart. “It was as if I felt her love surrounding me.”  This was God showing up to this woman, in a “knock your socks off,” kind of way.  Later as I spoke more with her, she asked,

“Do you think she is pleased with me?”

“Do you think God gave you this experience to answer that very question?  That this was a glimpse into heaven, the veil was moved aside, so that you could know that answer with assurance?” I asked and paused.

“That’s what I would settle on, and believe.  Yes.” I replied.

If you knew this woman, saw how she serves, loves, cares, lives this faith day by day, you would be able to affirm the same.  But it needed to come through the sense of her mom’s presence, which no doubt was the Holy Spirit descending upon her!  God knew just what she needed, and offered it to her, kind of a Christmas miracle for her, that Sunday.

Another woman came to me after worship, “Can I share what I heard?”

What she read to me was clearly the kind of voice God has — affirming, knowing things which she wouldn’t claim, and directing her to a new place of identity.

“I have you just where I want you, this is the new you,” she had heard.

“Can you believe this, Brian? I have been struggling for so long, but here it is: I’m just where I am supposed to be.”

“Yes, I can believe this,”  I responded.  Now that is the kind of message you just cannot say enough for people to hear and receive.  What a gift!

A man apologized, saying, “Well, as I wrote the sentence about what God would want to say, I was thinking about what God might say to me.”  It was as if he was saying he was not really thinking he would hear from God himself.  But then when he read what “he thought God might say,” it was not at all like what this man would ever think or speak.  It was clearly a word from heaven, a word for encouragement and grace into his very thinking life.  That’s how God speaks with love, encouragement, and grace.

Week by week last year during the four weeks of Advent, as we had been hearing about people who heard from God in the Scriptures and heard God speak to them in various ways, we also practiced as a congregation listening, writing what we heard, and sharing this with the community.  And every week, there was this unique way that God spoke and showed up to someone who didn’t expect “it to work.”

God’s like that.  Using the most basic, ordinary opportunities to surprise us with the joyful discovery anew:  God is real. God is alive. God is present. God speaks.

Although I am convinced of this, having first heard God speak into my life more than 40 years ago now, still, as I hear God speak today, it is refreshingly new and precious.

On Friday last week, a group of us met to listen for God to speak and direct us for who to be looking for as we were “hitting the streets” to share the love of Jesus with people in our community.  The three of us sat, praying, listening and then after about a half hour, compared notes.

One woman, Rebecca, shared, “I got this sense of oppression, first, like this weight came down upon me which stopped here at my shoulders.” She demonstrated this with her hands. “It felt like a heavy weight is being carried by someone.  Then I saw a gate, and trees and men. I wrote down the word ‘Challenge.'”

We wondered if the trees were the park?  Another woman, Kari, had written down the word “park” for one her impressions.  Like we were to head there. She had seen a blond haired girl with purple and colors in her hair, and another girl with her.  I had sensed we were to go to the local mall as well and there had seen a woman in what I thought was a lime green coat sitting alone at a table. I thought it was in an ice cream parlor at the mall.  And had seen two other older people sitting on a bench.

We prayed about these impressions and then set off, recognizing and reminding ourselves that we were not limited to talk only to these people we had seen, but we were vessels of God’s to speak and open up to people around us.

We stopped at Commonwealth Park first,

which is only a few blocks from the church.  As we walked toward the entrance, Rebecca said, “Brian, there’s the tree that I saw in my vision a long time ago.

Remember when I told you I wanted to meet to chat under a tree? 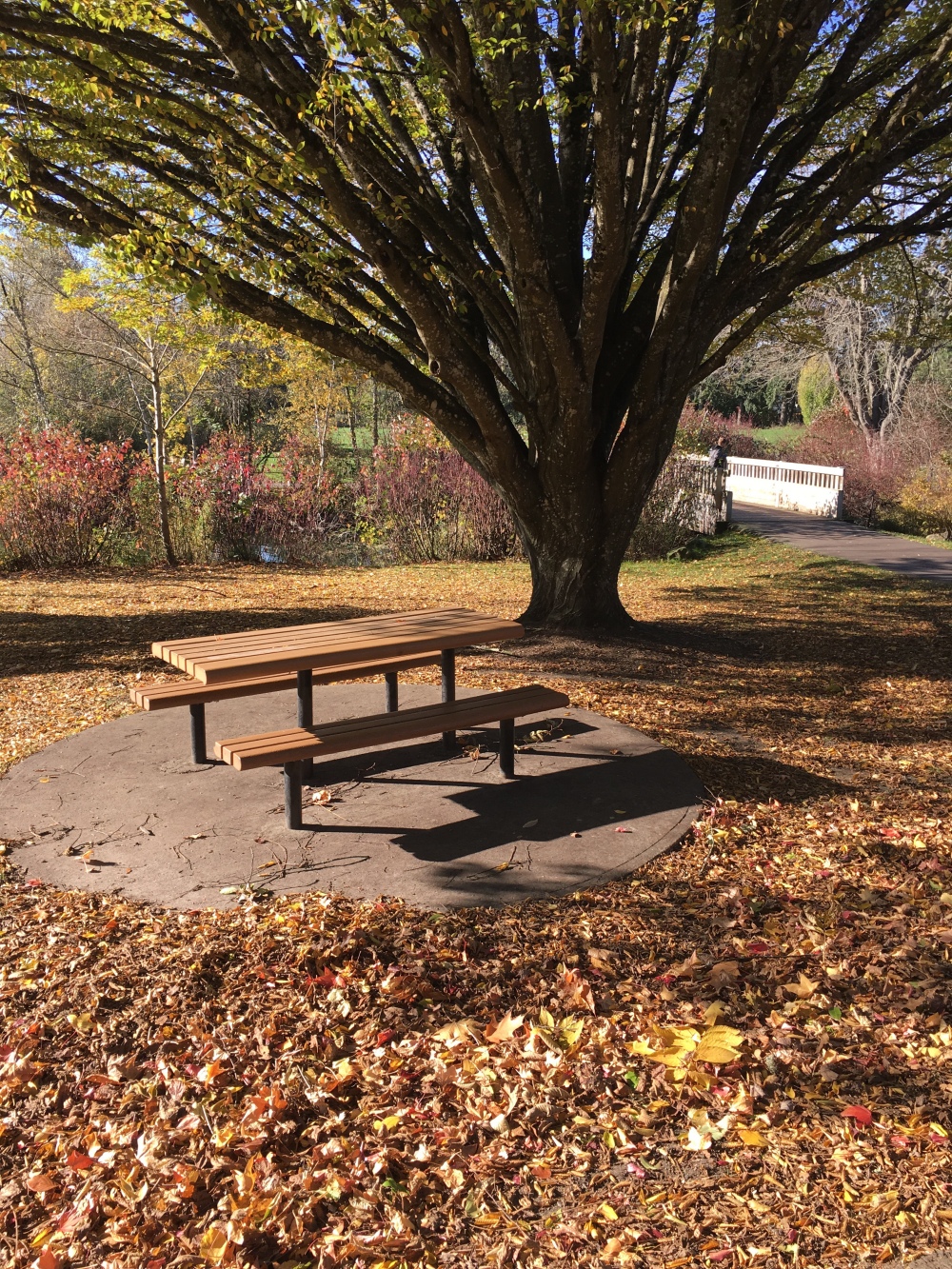 “I wonder if God has something connected to that tree today,” Rebecca wondered aloud.

Kari and I walked ahead on the trail that continues around the lake at Commonwealth Park. 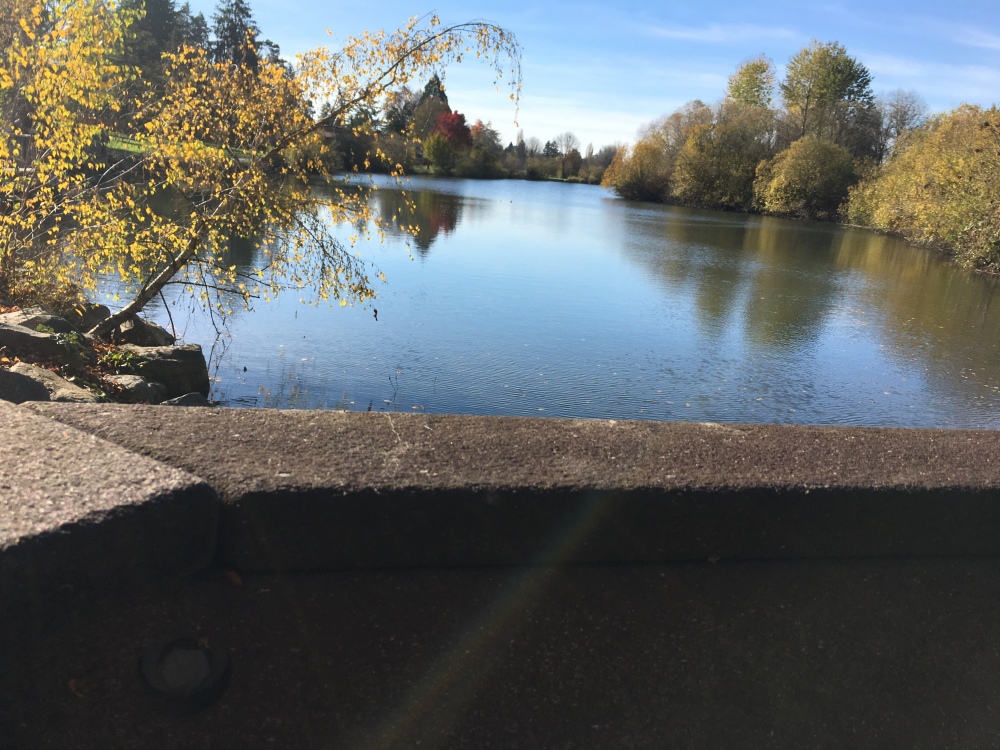 While we walked, Rebecca had this incredible experience back at that tree.

There was this mom taking pictures of her daughter and her daughter’s friend as a Christmas gift for the friend’s mom.

Rebecca walked up and started a conversation, and then began to share with the girls how kind their mom was being, doing these pictures, and caring for them this way.  She told them, “It’s hard work for your mom, and you need to be grateful for her.” Then God opened her eyes and Rebecca realized this was the person carrying the weight on her shoulders and began to speak into this single mom’s world with words of encouragement and grace. The woman began to cry.  Rebecca told her, “The Holy Spirit sent me to you and I don’t know if you know Jesus, but He sent me to encourage you and let you know how much Jesus loves you.”  The woman gave Rebecca this huge hug and thanked her profusely.  It was a God encounter and Rebecca felt the weight she had sensed lift from her shoulders.

After that and another conversation we reconnected and then headed over to the Cedar Hills Mall. 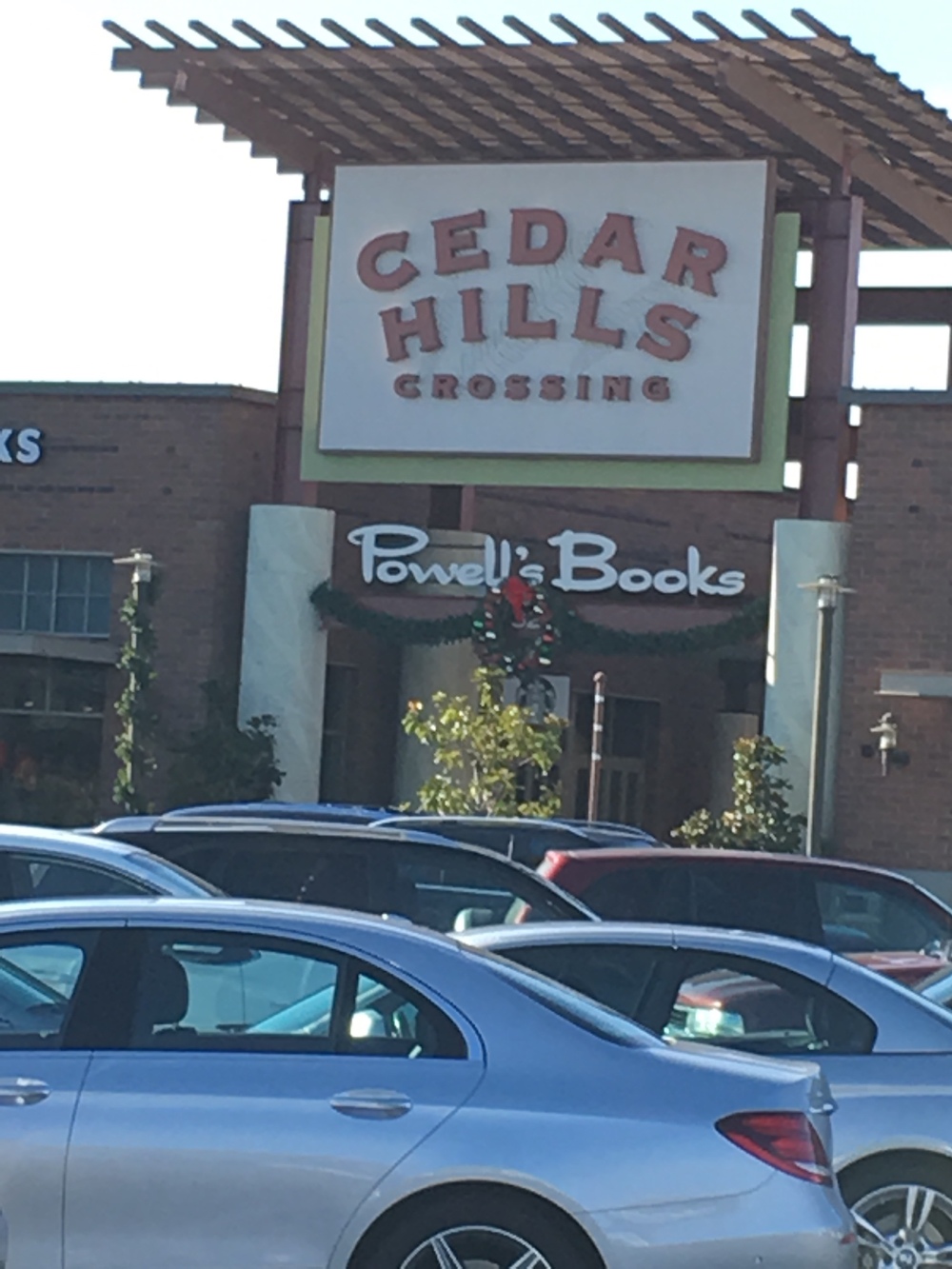 As we walked into the area, there were trees and a gate and men working inside the mall, setting up for Santa’s Village pictures. 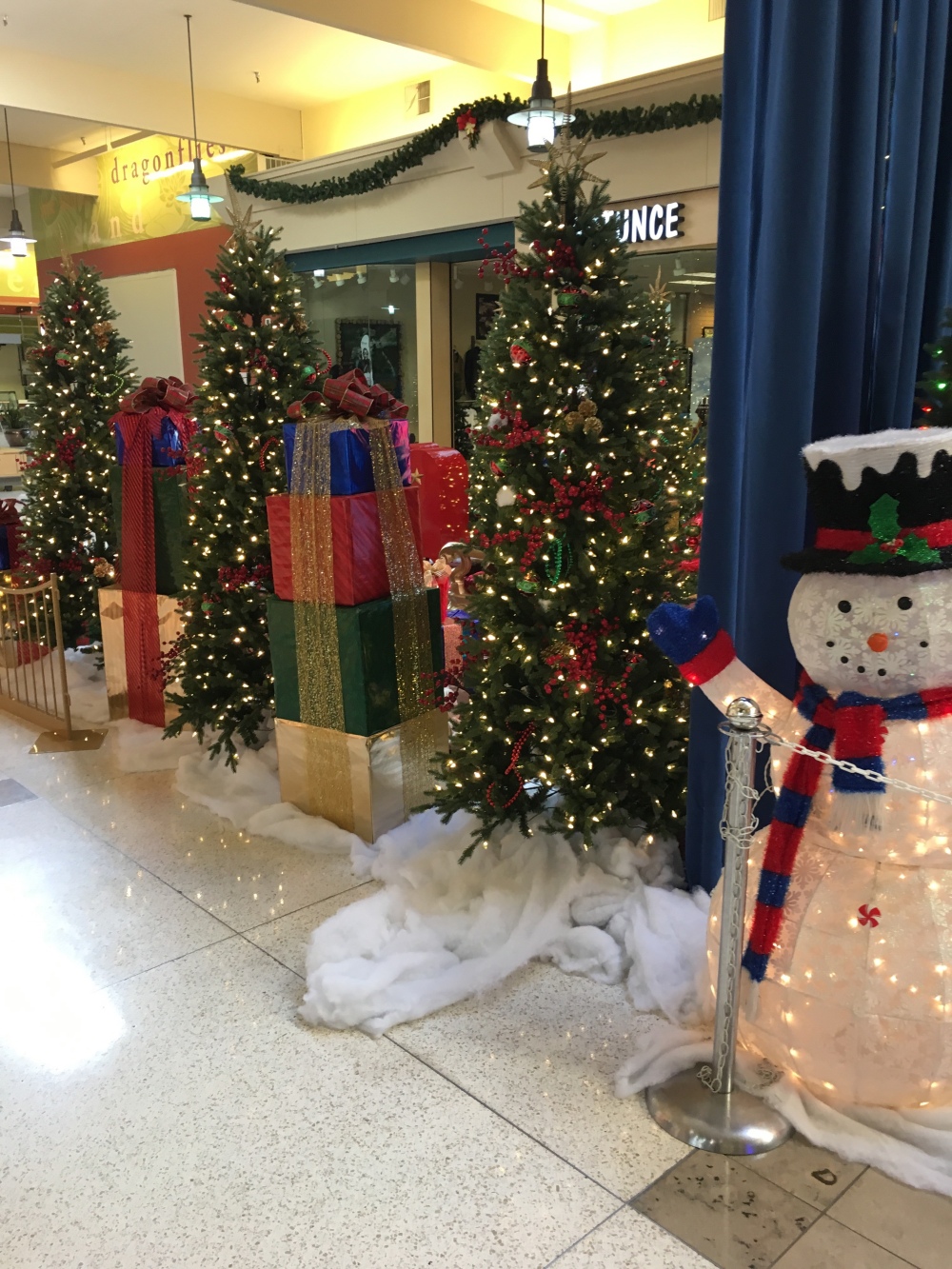 The exact words she’d heard. Rebecca had another conversation with one of the guys and

encountered her challenge as a woman, the head over the project, took offense that Rebecca was talking about Jesus, even though the guy she was speaking with had not stopped working.  “I’m so sorry,” Rebecca told this woman a couple times, but the woman wouldn’t respond.

While that was happening, I saw the two older people I had seen in prayer but had no clarity on how to approach them.  So, I missed that appointment.  Instead, I told a bible story to these two kids awaiting their mom at a nail spa,

engaging them in the story, asking them questions.  Before then, I had seen this woman sitting by herself at one of the tables in the mall, sitting in a lime green chair.

She was working on her laptop and had magenta hair and God seemed to highlight her.  I knew I was to speak to her.

I didn’t want to seem to be some creepy old guy hitting on a young girl, so walked past her one time, praying, “God what is your plan?”

The word that kept coming to mind was “lonely.”  I walked past another time and still didn’t stop.  And then a third time, I sat down on a nearby bench. I went and told the kids that Bible story, and then this woman I had seen, had stood up and was packing up her laptop.  This was my last chance, so, I just walked up and introduced myself and said, “I’m a follower of Jesus and believe he has sent me to say this to you today.  I keep hearing the word lonely, that you feel like you are alone and feel that sense of loneliness descends over you.  I guess the message is simply this, that ‘God sees you.'”

Back at the church as we had prayed I had written those words down for the person I thought would be in the ice cream parlor.  Maybe she was packing up to go get an ice cream!

I said, “Jesus loves you immensely and the thoughts that you hear about being alone and lonely are actually lies to harm you. The truth is that you are constantly accompanied by this good God who knows you and sees you and loves you.  You are not alone.”

As I spoke her eyes rimmed with tears, and she said, “It is so hard sometimes.”

The Lord had shown up, it was like we were surrounded by this sweet presence, and I responded:  “I see that it is hard.  I know that it hurts. Please know Jesus sent me to encourage you.  Please know his immense love for you.”

How do we hear God’s voice?

We pause, listen and write “Lord what you would speak to me today?” and then keep writing as we allow the words to come forth.

We open the Word, the Bible, and read and God will highlight a phrase or verse to speak into our hearts and lives. 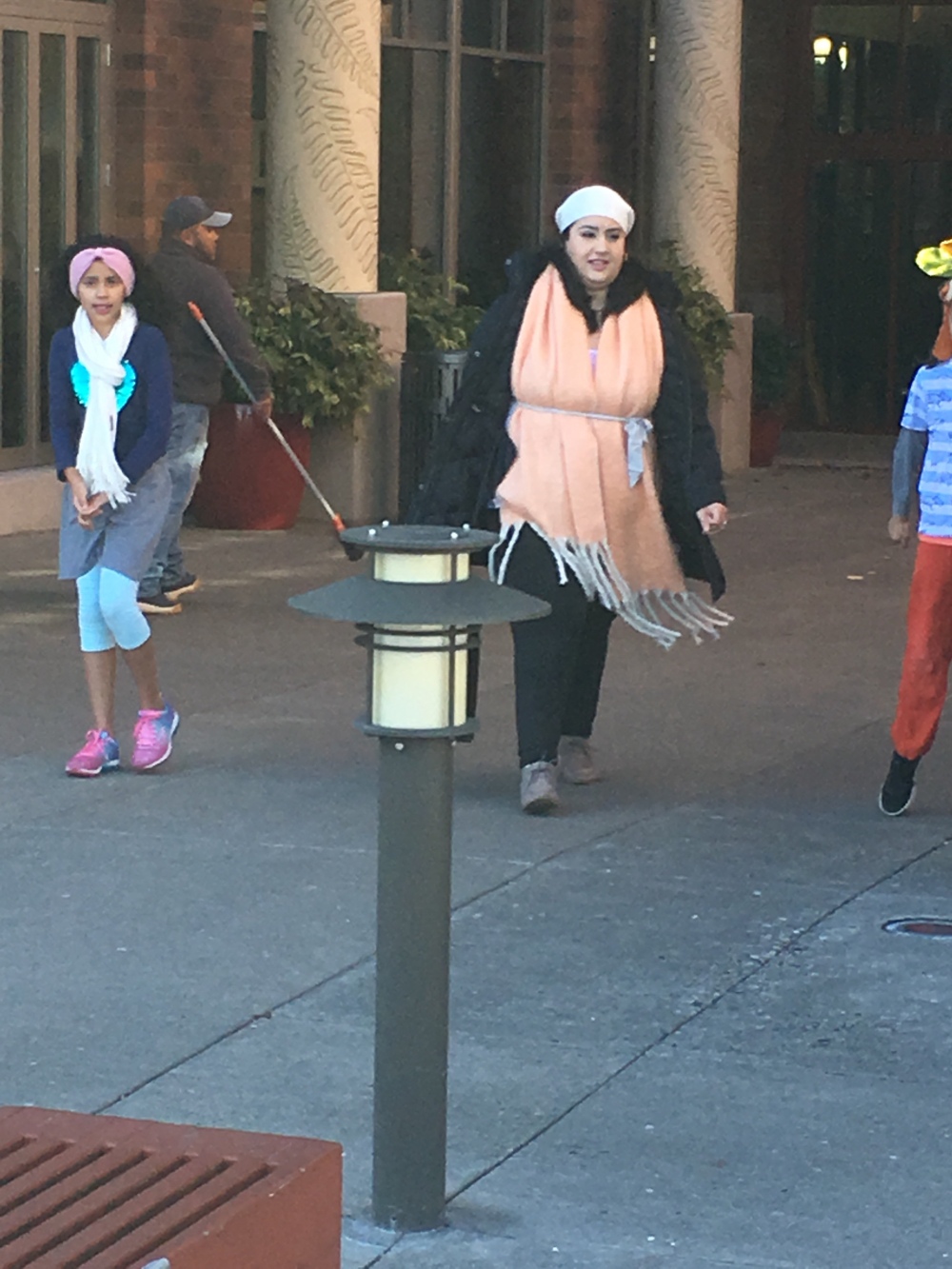 We hear God speak in the context of our lives, of our days, through the events, circumstances and random encounters we have.

We look for and expect God to speak through every means, and God will, for that’s the kind of God we have, a speaking, powerful, loving, present-tense God.